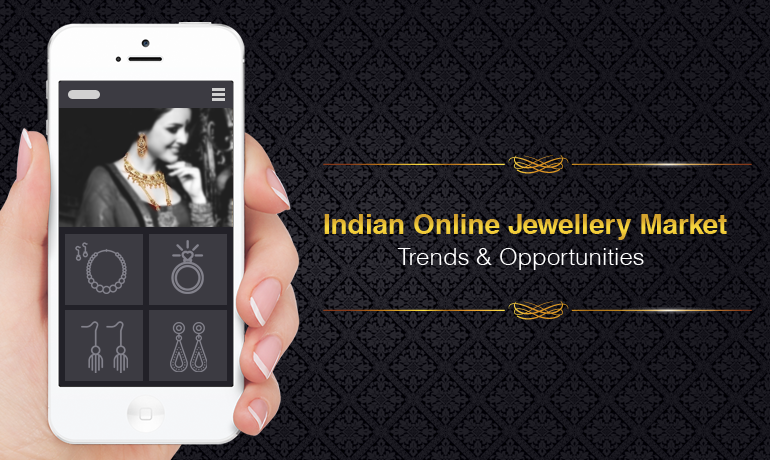 Evidently, India is widely known to have the largest culture of jewellery since centuries, more than anywhere else in the world. These –– jewellery, gold and precious stones are deeply rooted in our tradition that date back as far back as far as to the start of the Indian civilization itself.

For women and many families (especially in Tier III cities where many women do not own a credit card or even a bank account), jewellery is also used as a form of financial security as well.

As per the statistics from the Gems and Jewellery Export promotion Council (GJEPC) – with home to more than 500,000 players India exports 95% of the world’s diamonds, and the sector plays a very important role in the economy by contributing around 6-7% of the country’s GDP. UAE, US, Russia, Singapore, Hong Kong, Latin America and China are the biggest importers of Indian jewellery.

The industry contributed $39.9 billion in terms of foreign exchange earnings in FY 2014-15 to the economy, making the gem and Jewellery industry the second largest exporter after petrochemicals. Its total market size is supposed to touch $90 Billion in 2018.

There was a time, not many years ago, when in India, buying gold traditionally meant a trip to the trusted family jeweller! But clearly, the times are changing, and a booming eCommerce market that is being forecasted to touch $3.6 Billion in the next three years, that is roughly 20% of the global market size estimated at $18 Billion, is starting to challenge all conventional mediums.

This growth of the offline market, along with the growth in the global jewellery market has fuelled the rise of trade of jewellery through the online medium as well. While the online jewellery market currently accounts for a minuscule 4% – 5% of the total figures, but it is seen to be growing gradually and is all set to capture 10% – 20% of the market by 2020.

Some of the driving factors that have caused this growth include the changing lifestyles, growing disposable income and the outlook and buying patterns of the consumers.

Indian consumers are now in a mood to prefer look for greater transparency, better service and a more convincing value proposition keeping in mind the brand and trend, and are ready to pay the price for it. In fact, they are now more willing to spend more on branded jewellery with premium for high quality and inventive designs, as well. These consumers are becoming more and more comfortable shopping online, thus adding on to the growth of the segment.

To capitalize on this moment, the Jewellery sellers are coming up with innovative ways, from personalization to curation to home trial options, to address consumer’s concerns. They are offering convenience in various forms along with other incentives like giving them time to decide, not making it obligatory for customers to purchase at their very first visit, etc to lure the customers, as well.

India’s biggest diamond and gold jewellery retailer – Gitanjali Gems, who sells its products through more than 4000 points of sales spread across India, the US, the Middle East and Europe, and uses a range of Bollywood actors including Shah Rukh Khan and Katrina Kaif as Brand Ambassadors; has tied up with several online marketplaces including Amazon.com, Flipkart.com, EBay, and Jewelsouk, to sell its products.

The growth potential of the sector has convinced Ratan Tata (Chairman Emeritus of the Tata Group) so much that he has invested in a Bangalore-based online jewellery store BlueStone from his personal pockets. Other than him, many other investors are now becoming very keen on investing in the sector too!

Other than that, New Delhi-based PC Jeweller has also tied up with US-based online jeweller Blue Nile to evaluate the potential of the Indian market and are also in plans to launch their own website to replicate the comfort and convenience associated with shopping at its luxury showrooms, as well.

The metropolitan cities such as Delhi/NCR, Mumbai, Chennai, Pune and Bangalore have been the growth drivers in the Indian market. Young Indians between the age group of 24 and 35 years are their major target audience.

Plus the recent easing of import curbs on gold bars and coins by the Central Government has also further boosted the growth of the online trade. Established retail jewellers are aggressively seen to be tying up with popular eCommerce sites like eBay, Amazon and Flipkart, along with strengthening their own websites to make the most of the eCommerce space. The online market gives these established brands the leverage to offer a wider range of designs without keeping physical stocks.

Looking at the potential of the Gems and Jewellery sector; the Government of India has taken various measures for the upliftment of the sector as a whole. It has recently been declared as a focus area for export promotion, several steps are being undertaken to promote investments and to upgrade technology and skills to promote ‘Brand India’ in the international market, and most importantly the Indian government has recently also allowed 100% Foreign Direct Investment (FDI) in the sector through the automatic route as well.

Who are the major players in the online industry?

The eCommerce in jewellery in India is mainly divided into four categories of players: the established offline jewellers that offer items online using the marketplaces such as Flipkart, those who act as just facilitators by providing an online platform to the jewellers, those who get their products from dedicated vendors or even manufactures in small scale and then sell it online, and those who offer various items on their platform with jewellery being one of them.

But overall, the online jewellery market share is divided amongst few major players and 20 odd eCommerce players, wherein 41% of consumers prefer gitanjalishop.com to shop, 18% use CaratLane.com, 11% use bluestone.com, 10%  prefer pcjeweler.com, 7% people prefer titan.co.in, 5% visit amazon.com, and 4% are loyal to snapdeal.com.

Although, due to the small size of the market, many players have been hesitant to enter but there has been a dramatic rise in several offline vendors moving online who have started selling their inventory through marketplace business model.

The jewellery market is currently led by CaratLane, Bluestone and a few newbies! India’s first ever and the largest online jewellery store is CaratLane. The company was founded in 2008 and one of their founders comes from a family-owned traditional jewellery business and was inspired by BlueNile. Talking about their Business Model – while all other Indian online jewellery portals have opted for a B2B (Business to Business) or marketplace model, CaratLane uses a B2C model wherein it acts as a manufacturer and sells directly to the consumers.

But instead of maintaining a conventional inventory, the company has opted for an innovative strategy. They have tied up with a strong network of ‘4000 vendors globally’, who supply products on request. The company has been acquired by Titan and had raised a total of $52 Mn in the past.

The other only major player in the online space is BlueStone that started in 2011. Bluestone too, follows more-or-less a similar business model like CaratLane, wherein they act as manufacturers and instead of holding an inventory, they too cater to made-to-order items.

It has received an investment from Ratan Tata (Chairman Emeritus of the Tata Group) and has raised a total of $31 Mn so far from several investors to fuel their rapid growth. BlueStone has annual revenues worth ₹100 crores with a ticket size of roughly ₹15,000.

Others in this segment include – Craftsvilla, Voylla, Jewelsouk, Youshine, along with major marketplaces like Amazon, Flipkart, Snapdeal, Jabong, Myntra, and offline players like Gitanjali Gems, PC Jewellers, etc…

One of the biggest benefits that a customer gets when they purchase jewellery online, especially in metro cities, is convenience, along with a variety of options, competitive pricing, etc.

And again, almost all of these brands use Television, Radio, and Social Network to promote their brand.

Other than these, the online segment is also seeing the entry of many new players with unique business models. One such being – Cult Curators! It was founded by Sanjana Bhuwalka & Aanchal Rathee, and is an online platform that showcases global jewellery designers, and help you to find unique approaches to design, new materials used in jewellery and overall.

Then there are new companies like LaElegante and Eristona that aim at providing affordable jewellery to the masses, who have recently entered the market as well. But, unlike the rest of their competitors, these newly born companies – VelvetCase and WearYourShine run marketplaces to help offline retailers sell online.

How to overcome challenges faced by the segment?

Yes, selling jewellery online is hard. Very hard! That too when you have at the least seven to 10 offline retailers within 10 km from where ever one lives.

As much as drastic growth the segment has been receiving, but the online jewellery sector still remains to be in its nascent stages and still has a long way to go! And goes without saying, it also has its share of challenges that it faces too.

Some of the top ones being: –

To solve these problems, these online majors have been implementing various unique strategies.

To begin with, there is a huge need of awareness in online jewellery shopping industry, and the company blogs and adverts are effectively being used to fix this. It is only because of mediums like social media and their awareness strategies, the sector is seen to be booming.

The companies are also seen to be educating customers about the certification program and technicalities the companies perform to maintain the authenticity of the products.

Next, the biggest rival of these online brands are the offline stores; who in fact are seen to be coming online too!

You walk down any street of any metropolitan city, and you’ll find dozes of jewellery stores. And when it comes to buying jewellery, a majority of the Indian audience prefers to go for their trusted offline jeweller who they have been going to since years.

To fix this, CaratLane and Bluestone offer their customers easily accessible online education about how to choose the right gemstone and precious metal, along with trust certificates, affordable pricing, Try-at-Home policy, 30 days exchange policy, Virtual Try-On app that acts like a mirror with a real-time 3D projection of a fashion item on your looks, visual search technology,

Unlike the offline rivals, these online players provide a different proposition altogether. They don’t target the mother with her high-value purchases, but focus on the working daughter’s discretionary spend. This means they directly or indirectly compete for the same share of the wallet as that of consumer electronics gadgets or even apparels and accessories.

Having said that – even though big brands like Amazon and Flipkart sell precious jewellery, and many offline players are also coming in, but it is going to be an extremely difficult task for them to compete with the industry majors like CaratLane and Bluestone for the market share, as the buying behaviour of customers is different when they buy precious jewellery as opposed to them buying a mobile or some other product.