MyDentist: One of India’s largest and most accessible chain of dental clinics 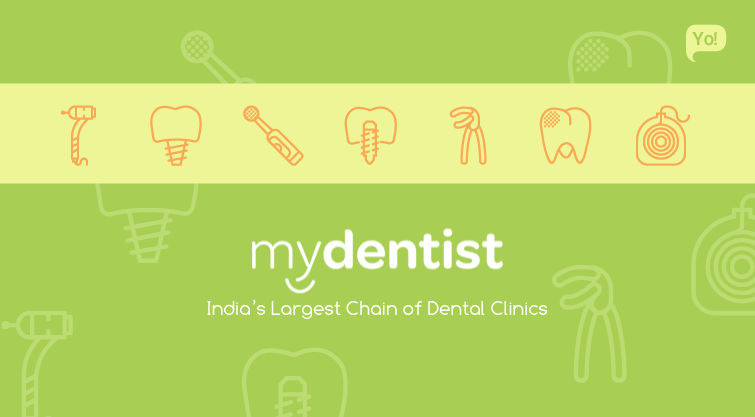 MyDentist, that was founded in 2009 under the parent company ‘Total Dental Care Private Limited (TDCPL) by Vikram Vora, is India’s largest and most accessible chain of dental clinics that offers high quality and hi-tech dental care services at affordable prices.

To add to that – MyDentist also offers the most advanced Cosmetic, Implant, Conventional and Preventive dentistry, at the most transparent and affordable prices across all its centers.

MyDentist clinics across the country are based on three key principles – Accessibility, Affordability, and Transparency! They make sure to use the best products for the offered treatments, provide affordable pricing, maintain the unique central sourcing systems and keep a standard procedure of operating at all clinics and economics of scale of operating over 200 clinics around India including cities like – Mumbai, Pune, Ahmedabad, Surat & Bangalore.

The company firmly believes in following ethical and transparent practices and providing access to oral care to all. To do so, MyDentist has spread across a huge web of 200 clinics across India. One can easily start a treatment at one clinic and continue it at any other clinic as all records are accessible online as well.

What is their operating and business model?

To begin with – after having successfully treated over 6,00,000 patients since the beginning, they have realized that most dental problems in patients do not get diagnosed and treated because of delaying of checkups, which often is because of the cost, availability of time and laziness.

Having said that – MyDentist operates under a completely owned model to make sure that service and pricing standards are maintained across clinics, and in order to increase public awareness about the importance of dental health, MyDentist also offers all free dental check-ups, consultations and X-rays at no charges.

By giving a free consultations and Intraoral X-Rays, which comes as a pleasant surprise, MyDentist encourages patients to get their teeth checked on a regular basis. This is not only to help them to maintain their oral health, but also to save their money as well.

To book an appointment, all you need to do is: -

Their clinics work on a lease and typically have a compact look and feel. They are usually accommodated in a 350 sq feet commercial space along with two dental chairs and small lounge.

They have a simple way of deciding the location too! Vikram just looks around for the nearest ICICI Bank ATM or Café Coffee Day outlet. It is a good indicator to understand how densely populated a place is. So far, this strategy has worked very well for us, given that MyDentist has had to shut down only one clinic since it set up shop in 2011.

All 200 clinics are open from Monday to Saturday between 9am to 9pm, while some of them are even open 7 days a week, during that window. They have a total team of over 550 dentists that cuts down the waiting time drastically, and every patient is addressed to, immediately.

It also follows a consistent and transparent pricing process wherein they provide the patients with a variety of payment options that meet their individual requirements, including: cash, cheques, credit & debit cards, online payment, and mobile wallets (PayTM, JioMoney and MobiKwik), as well as easy E.M.I. options for major dental treatments.

To ensure consistency in quality of service that is delivered to the patients, they have also installed a cloud-based patient and knowledge management, an HR suite, telephony and payment management system across all its clinics.

Their revenue model is pretty simple too! While the company offers membership cards, preventive plans and oral care merchandise to their patients, its primary revenue stream continues to be clinical treatments.

On the other end, they operate on a large volumes and lower margins model, wherein – the company buys dental equipment in large quantities from renowned companies such as 3M, GC Dental and 3iBiomet, and in turn delivers treatments to patients, at competitive rates. They believe that Scale is what helps them to keep the costs lower, and also gives them the leverage to negotiate for better training sessions provided by the suppliers.

The cost of treatment at MyDentist could be anything between ₹300 to ₹90,000, and the X-ray and consultation, and interestingly, for any payments crossing the ₹500 market, can be paid using their EMI facilities that is offered in partnership with leading banks such as HDFC, ICICI, Axis and HSBC, and more recently Bajaj Finance.

What is their targeted market segment?

The dental sector in India is said to be one of the most and largely unorganized part of the country’s health care market, and more than 50% of the population has never visited a dentist and over 70% suffers from dental diseases.

But to tackle the dental problems, the ratio of dentists to individuals is as less as around 1 to 10,000 in the urban areas of the country. As per a report by the world health organization – India has less than 100,000 dentists.

As per a report submitted by Frost & Sullivan, the overall Indian dental care services market (including dentists and dental ancillary services) that was estimated to be around ₹6000 crores in 2014, grew and reached around ₹9000 crores in 2015, and is now preparing to touch $250 billion by 2020.

The dental tourism that accounts for about 10% of the total medical tourism industry in India and is also projected to grow at 30% a year as well!

Surely a large part of all this will be dominated by products but dental care as a service is also expected to account for a significant chunk of the growth here on.

As the population become more fashion conscious, and as their income and livelihood increases, there will be a gush seen in the growing demand for cosmetic dentistry such as whitening and fixing chipped teeth.

Hence, while affordability is not really the biggest pull, it certainly has definitely driven a lot of people to adopt dental services. Given that, their primary target audience are the people that have a monthly salary of around ₹25,000 – 30,000, ones that fall under the middle of the pyramid.

What marketing or promotional strategies have they adopted?

Interestingly, most of their patients come through referrals and post that, investments are made in follow up and CRM activities to retain those patients.

Additionally, regular free dental check-up camps for more than 50,000 children at schools like Podar Jumbo Kids, St Xavier, Springfield and many more, are also organized to spread awareness about dental care as well.

Furthermore, you will also see them coming up with regular discount offers, to attract new customers, and conduct regular dental camps at schools and colleges across Mumbai and Pune as well.

Vikram Vora had founded MyDentist in 2009, and currently acts as the CEO!

He had started his career as the project manager with Lionbridge in August 2004 and developed eLearning modules for NetG. After working for them for about a year, he then moved on to working with ICICI Bank as their Manager for Knowledge Management for around a year and a half.

This was followed by joining Healiz Healthcare Private Limited as their Director in April 2001, to design, manufacture and source products for the Dental Care Industry. Since then, he has stuck along with them, and in fact, even further went on to mentor a growing chain of ice cream shops called – ifruit. In January 2009, he decided to pursue his dream of entrepreneurship and started MyDentist.

Over the period of time, he has also been awarded several times. These include: -

Vikram had noticed that – doctors often charged exorbitant fees for dental treatments, and realized that there was a great need to be more sensitive towards the middle-class people, who were seen to be finding making ends meet difficult and were neglecting dental hygiene just to save money.

That is how the idea had evolved.

Post that, after finding the right business model and capital to implement the idea, with an initial investment of few lakhs borrowed from his father and friends, Vikram started a clinic at a charitable trust in Vile Parle in 2009.

In a short span, after ₹50 lakhs being invested, that was funded largely by credit cards, overdraft on credit cards, banks and friends; he now had six clinics in suburban Mumbai.

During this initial phase, Vikram had struggled a lot to arrive at the right business model and generate funds to implement his business idea.

While the business was doing reasonably well, it was clear that it could not scale up, as taking continuous debt was not an option.

During that phase, he happened to meet his ex-boss – Anand Lunia (of Seedfund), which gave him the idea that if he shared equity, he could raise funds to expand to nearly 100 clinics. Anand introduced him to Pravin Gandhi at Seedfund, who told him to shut his old clinics and listen to what they had to say to grow bigger.

Their condition was that – they didn’t mind incubating vikram, but he would have to follow what they say or ask him to do.

After three months of thinking and asking friends — Vikram took the plunge and went ahead with the opportunity. That is when Seedfund Advisors incubated MyDentist in 2010 and eventually increased its investment in 2011.

So far the clinics had operated under the name of Total Dental Care. But after receiving the Seedfund, R Sriram (founder of Crossword book stores), his advisor helped them to change the name to MyDentist, and Lemon Design (Design agency) helped them choose the vibrant green colour associated with the brand, as well.

Since then, there has been no looking back for them. By 2012, MyDentist had 50 clinics in Mumbai and they were aiming to increase to 7 more clinics a month. Most of these clinics were seen to break even within 6 months of starting. They had now become a team of 350 highly motivated staff, of which 140 were dentists, had catered to more than 1 Lakh patients (in 18 months)

In 2013, MyDentist also raised another round of investment worth ₹50 crores as part of their Series B funding from Seedfund Advisors (₹10 crores), and Asian Healthcare Fund  (₹40 crores). The new capital was raised to expand MyDentist’s presence from 40 clinics to 120 clinics across Mumbai and Pune.

Each clinic was now bringing-in anywhere between ₹3 lakh and ₹8 lakhs in revenue a month and Vikram was looking at touching sales of ₹50 crores and 100 clinics by year-end.

By 2015 – they were accounting for 600 dentists with an average age of 30, and had also had completed another funding round that was led by LGT Venture Philanthropy of ₹40 crore, which also included a participation of existing investors Seedfund (₹7 crores) and Asian Healthcare Fund (₹3 crores). The funds were being aimed at being used to expand from its current 100 clinics in Pune, Mumbai, Surat and Ahmedabad, to many more across various cities.

More recently, the company has also announced their tie-up with Bajaj Financial Services, along with three mobile wallets (PayTM, JioMoney and MobiKwik) to simplify dental treatment, and make them more affordable to the masses.

Under the Bajaj Finance scheme, if the total bill of a patient for a treatment is over 10 thousand rupees, the patient can choose to pay through EMI.

Within the first two months of launching the scheme, more than 200 people have already availed Bajaj Financial EMI services.

So far, they have raised a total of $18 mil in 2 rounds from 4 investors including: Asian Healthcare Fund, LGT Group, MAPE Advisory Group, and Seedfund.