YouWeCan – An Initiative Of Yuvraj Singh 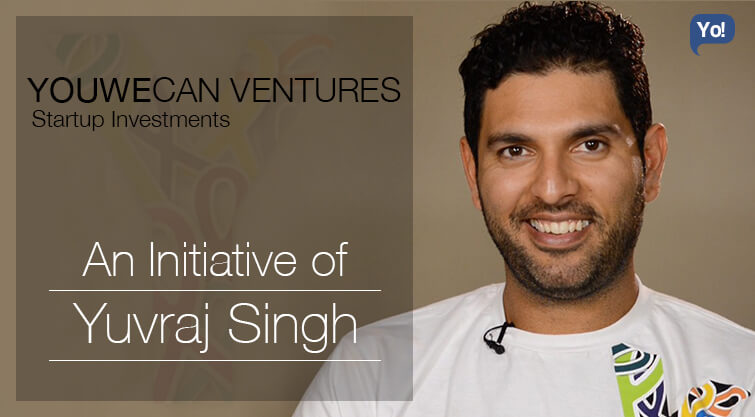 With the start-up market booming crazily, everybody seems to be jumping on to this bandwagon. Be it College students, Entrepreneurs, Bollywood Celebrities, or for that matter the Government itself, everybody wants a piece of that cake.

Some are choosing the entrepreneurial route and entering with a Business, while some are opting for the Investor Path.

Having said that, the recent entry into our circus, is the legendary cricketer Yuvraj Singh, but unlike the rest, he comes with a different vision.

Yuvraj Singh has recently started an initiative called ”YouWeCan Ventures” to help start-ups with seed funding in April 2015. He will be investing around Rs.40 – 50 crores in online start-ups.

At this point, they would be investing anywhere around INR 1 crore to INR 1.5 crore in a start-up using a co-investment model, in against for 12-15 % stake.

What is unique about this Institutional Investment Structure is that Yuvraj has funded YouWeCan with INR 50 crores of his own money. But the organization will be managed completely by it is co-founder – ‘Nishant Singhal,’ who will be looking into charting the strategy and identifying potential investments.

Nishant has been Yuvi’s business advisor since 2010 and prior to that, he was a Chartered Accountant by profession and also holds 11+ years of working experience with PwC. His expertise include – IT Strategy consulting, Financial Risk Management, Corporate Finance and Corporate Governance.

Since their launch, the company has already closed on 6 rounds of Seed Funding for undisclosed amounts in companies including – Vyomo, Moovo, Healthians, EduKart,
JetSetGo and most recently Cartisan.

Going ahead, the company intends to and is in process to create a more formal structure, instead of doing just one-off investments. They have a target amount of becoming a INR 300 crores fund house.

To achieve that, they have also started approaching Angels, Early Stage VC funds and other Start-up ecosystem enablers, for tie-ups. If you wish to partner with them, please feel free to contact them at: “partnerships@youwecanventures.com.”

Other than that; any start-up or entrepreneur seeking funds can send-in their profiles and proposals to: “proposal@youwecanventures.com”.

What’s On The Table?

According to the founders, the venture will not only be provide Seed Funding to start-ups, instead it will be coming in with the whole package that includes – Seed Capital, Technology Advisory, Financial Advisory, Branding, Marketing and PR as well.

Yuvraj is one of the best Cricketers of the Indian Team and holds a huge fan following and  also holds more than 9 million fans on Facebook and 3 million followers on Twitter as well.

YouWeCan considers these as their assets, and are aiming to capitalize and take leverage of them to the fullest. So if any deal goes through, then Yuvraj would also be coming on board as a brand ambassador as well.

Therefore, the company is searching for ventures or products, which comparatively hold more potential to make the most out of Yuvraj as a brand than the rest.

They believe that the brand that he will bring to the table will be exceptional. And not only that, but Yuvraj would also be highly beneficial in bringing in a very different and extremely influential network as well.

YouWeCan was started as an initiative of ‘Yuvraj Singh Foundation’ to fight cancer at the root level. This project is modelled on the lines of Lance Armstrong’s LiveStrong initiative.

Soon after defeating the deadly virus after a long treatment in the US himself, Yuvraj had started this organization to support others to fight the battle.

According to him, even when 90% of cancers are curable if detected in stage one, and with cheap cancer screening costs (INR 550 per person), Cancer still manages to kill over 12 Million people every year.

Hence, Yuvraj has taken up the task of creating extensive awareness through his program YouWeCan, by educating the masses with its causes, control, symptoms, early detection, and its treatment.

The non-profit organization comes with a twofold aim:

1. To create awareness and get rid of the mental block that is attached with cancer amongst the masses and to help fight the disease.

2. Provide mobile cancer examination stations within the reach of masses.

For them, even early cancer detection is not their final goal, and also would be offering patients with social, psychological, physical and vocational rehabilitation, to take back control of their lives and to fight the stigma. They would be doing so either directly, or via tie-ups with Cancer specialist Organisations.