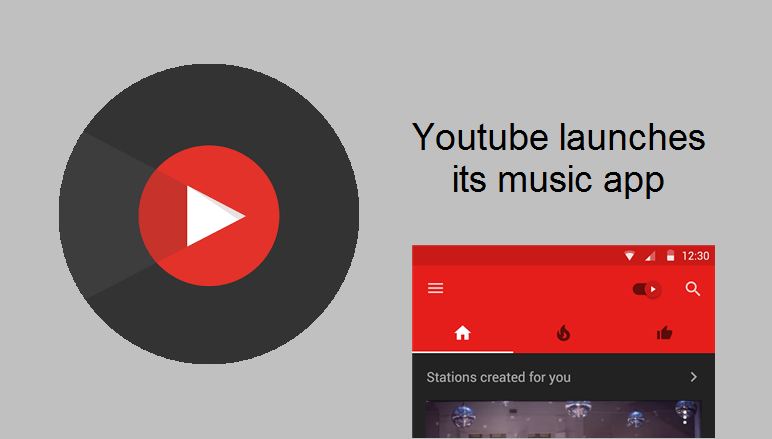 So YouTube since more than a year had been experimenting to understand how it could offer its huge collection of music videos, audio tracks, covers, live performances, to its users.

They had also begun testing with an Android-only beta version of Music, which back then was called ‘Music Key’. Music key had a very small and enclosed set of users. Their ultimate goal was to understand and observe how would music fanatics use it and react to this app.

And not to forget, how would that affect YouTube as a whole as well.

Picking up on the observations they collected; the world’s third most popular website has cracked the code and launched YouTube Music.

During the beta mode, the company had also learned that the users (obviously) disliked ads.

Moving on! As we know, Ping (Apple) failed, Apple Music is only for broadcasting, and Spotify is just about “Okay” too. Clearly, there hasn’t been much success and social experience around music yet.

On the other hand, the social aspects of music on YouTube have been extraordinary, and since artists already have a regular engagement on the platform, YouTube Music will only make life easier for them.

With this app, YouTube ultimately aims at creating a stop destination and also desires to make the switching between video and audio-only play, easier.

According to the makers, one will get a chance to experience and discover a new world within an already existing galaxy, which is especially designed to make discovering music a lot easier.

Look at it this way – at the end of the day, you are going watch or listen to music on YouTube only, but with YouTube Music app, that experience will far more simpler,
convenient and more enjoyable.

YouTube Music is strongly focusing on personalization. When someone launches the app, they would see the main screen offering a trio.

First, they would see a personalized homepage which will have basic genre stations keeping in mind your personal taste into account. And for those wondering of how do they know your personal choice? Well, you’re still logged on YouTube, even when you are on the music app, so they exactly know what you’ve watched and searched for earlier.

The next is the second tab which focuses on top hits of the day’s most popular videos.

And the third screen collects all the videos a user has “liked” in one place. One can make their own playlists, by pushing the ‘thumbs-up’ button on a song and the app will place the song into a playlist. One can also search for individual artists, songs or albums, etc…

It is obvious that, the end goal of the app is to keep you engaged in watching and/or listening of music on YouTube Music.

And to get you listening immediately, the YouTube Music app has also curated a few areas, which are pretty interesting to listen too. The YouTube team works on tweaking algorithms every now-&-then, to pull out content specific to the music vertical, which can be anything from an official video, a dance mix to a cover.

Unlike the sad typical radio “Top 40”, these curated areas are nothing but a human-created list which is based on what’s hot and trending on the platform at any given moment.

Lastly, what is interesting to note is that, YouTube has also taken the efforts to collect all the best alternate versions of a particular song or video, and has made them easily accessible using the “Explore” tab under the currently playing track. Basically, for example when you are listening to a particular song, you will also see different versions or remixes of that original under the “Explore” tab.