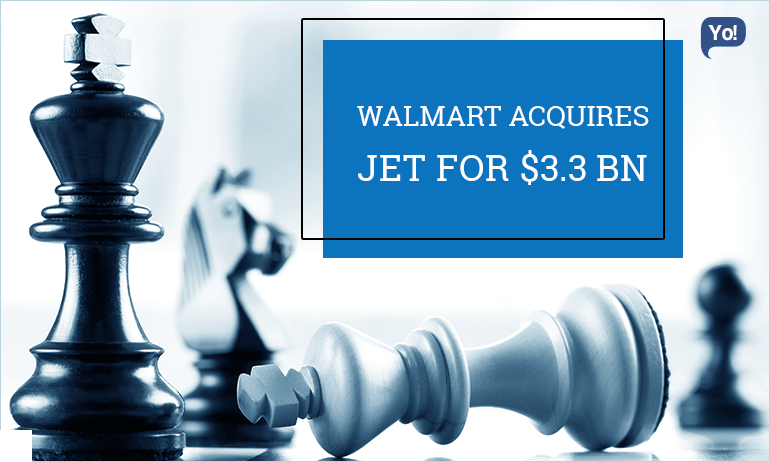 In a recent –– it has been announced for what is being called as one of the biggest eCommerce acquisitions ever that, Wal-Mart Stores has entered into a definite agreement to acquire Jet.com today for a whooping $3 Bn in cash.

By making the purchase of Jet.com; Wal-Mart has entered the list of investors betting on so-called “unicorns”, or private start-ups that are valued at over $1 Bn.

Marc Lore – CEO and Founder of Jet, accounts for 25% stake in the company, and will be making somewhere close to $750 Mn from this deal.

Although both the companies will remain separate companies, and both will maintain distinct brands, where Wal-Mart will be focusing on delivering the company’s Everyday Low Price strategy, while Jet.com will work on to provide a unique a differentiated customer experience with curated assortment. However, both the companies will co-operate with each other over technology solutions!

This deal also follows a five-year eCommerce acquisition spree of Wal-Mart, wherein they had bought 15 start-ups, in attempts to become the dominant player of the online eCommerce industry. Shares of Wal-Mart fell by 0.6% to $73.35 in New York, after gaining a total of 20% this year till the end of last week.

As per several resources, Wal-Mart is believed to have insisted Marc Lore to remain at the combined entity for several years.

Marc Lore will be replacing Wal-Mart’s current top eCommerce executive, Neil Ashe (who will leave the company) and will take over their eCommerce operations, along with his Jet.com.

Additionally, Wal-Mart is also preparing to introduce Jet’s technology, while being under Walmart’s umbrella.

For now, the acquisition has been approved by the Boards of both companies and is expected to close this financial year itself.

Allen & Company and J.P. Morgan Securities were Financial advisors to Wal-Mart during this deal.

What’s in it for Wal-Mart?

To begin with – Wal-Mart will be getting access to Jet’s proprietary technology and customer data.

Their technology is said to be one of their prized possessions and one of the best in the industry! It offers a real-time pricing algorithm, which tempts customers with lower prices if they add more items to their basket.

Additionally, it also identifies orders in real-time, segregates which order should be routed to which vendor for getting the lowest fulfilment and shipping costs, and moreover, this technology also helps in giving back to the system in the form of discounts as well.

And quite honestly, buying this platform would make more sense than trying to develop it internally.

On the other end; Wal-Mart will be getting what many dream to have – Marc Lore, one of the smartest minds of the American e-commerce system!

This is Wal-Mart’s way of injecting the entrepreneurial spirit into the company, and a desperate attempt by them to infuse a talent with fresh ideas and expertise, along with an attractive brand with proven appeal towards millennials.

Marc Lore is the founder and CEO of Jet, which was started in 2014 after selling his previous company to Amazon for a whooping $550 Mn. The company’s name was Quidsi – the parent company of Diapers.com and Soap.com.

What’s in it for Jet.com?

The real question here is what will Jet’s founder, Marc Lore be getting out of the deal?

Not only will Marc be monetising his 25% to roughly 750 Mn, but Marc will also be moving into Wal-Mart to head its eCommerce division along with Jet.com.

This would enable Jet and Mark to get deeper pockets to fight their arch-rival Amazon.

Plus, getting close to Wal-Mart would also give Jet the opportunity to increase their margins by making use of their vendor relationships and distribution network, to get goods at a cheaper price.

Talking from investor’s point of view…

Jet.com’s backers would be making anywhere from twice to 15 times of their initial investment, depending on when they invested.

These are the ones who had invested in early 2015, at around $600 Mn valuation, and would be making somewhere around 5 times of their original investment.

But the biggest winners would be the investors from the first round in July 2014, when the company as valued at $200 Mn. These include New Enterprise Associates (as the lead), with participation from Accel, Bain Capital Ventures, MentorTech Ventures, Primary Venture Partners and Angel Investor David Spector. These would be pulling out a roughly 15-times return on their investment.

What are the key underlining factors that led to this deal?

Last year, of every $10 that an American shopper spent on goods; $1 was spent online.

Even the Wal-Mart faithful were beginning to use Amazon. Last year over a tenth of Wal-Mart’s customers had shopped on Amazon as well.

And on the online front, with online sales of about $14 Bn last year, Wal-Mart had been struggling to compete against online retailers like Amazon as well, who accounted for revenues worth $99 Bn.

They couldn’t match Amazon’s fast and efficient shipping through Amazon Prime (that offered 200 Mn different items, while Walmart.com served around 11 Mn) as well.

Wal-Mart had spent Billions of dollars on expanding their online operation! This included hiring thousands of workers, opening two offices in Silicon Valley, building large eCommerce distribution centers, and even starting a subscription service similar to Amazon Prime at half the price as well, but couldn’t even come close to shaking Amazon.

Meanwhile, on the other hand; Jet.com, a year-old start-up, managed to achieve: –

Interestingly, even after being such a new company, they are one of the only few who have managed to shake Amazon’s dominance on internet shopping. By offering heavy discounts on bulk orders, Jet claimed to undercut Amazon in many areas and additionally, also boosted high-volume shopping on their own site as well. It had grown to around 3.6m shoppers in the US in no time!

Now, it is true that Wal-Mart was looking for ways to lower prices, broaden their offerings and offer the simplest, easiest shopping experience; but does that mean, spending $3.3 Bn on a business that is yet not profitable a good decision?

If you looked at Jet from a fundamentals perspective, the company wouldn’t be worth what they paid for it. But were they looking for that?

Turns out – Wal-Mart was never valuing Jet.com solely based on their traditional metrics like profitability, which the start-up did not have! They were looking for something far more bigger.

After selling Quidsi to Amazon and after working with them for a while, when Marc decided to start Jet.com, Investors lined up to back him, and shockingly, he managed to raise more than $200 million even before the website was even launched or sold a single product.

He was seen as someone who could bring a unique approach when it came to eCommerce and was one of very few who had the capabilities to put a dent in Amazon!

They wanted to inject Marc and probably some of the veterans on his team, into Wal-Mart to help them pull them out.