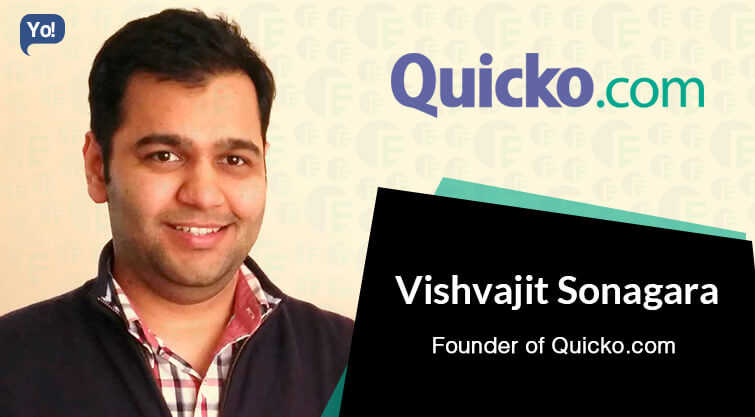 After working at Wall Street banks for close to a decade, one day you think of coming back to India, with a sole intention of capitalizing on the booming technology sector. This is the story behind the successful career of Vishvajit Sonagara. He is a an avid technologist and has served in technical leadership position at Fidelity Investments and Deutsche Bank. During his work years at Fidelity Investments and Deutsche Bank, he realized there is a huge need and potential to bring 21st century personal finances to Indian consumers.

This is when the idea came to his mind to head back to his home country and build something exquisite. As a graduate in computer science, he was already in sync with the technology sector, which gave him ample credence for his first startup, Quicko.com. The platform provides ITR-1 filing software to Indian taxpayers for free, guarantees 100% accuracy and privacy, maximum refund, expert advice and updates on changes in tax laws.

According to him, filing taxes is one of the vital aspects for any person, but the current mechanism in place has made the whole process highly cumbersome. This was the sole reason behind the launch of his company. Vishvajit is considered one of the most energetic, upbeat people to work with. His ingenuity and vigor to build revolutionary products have led him to the startup arena.

Please provide a brief overview of your product/ service.

Quicko.com provides Do It Yourself Tax Planning, Preparation and Filing services to individuals. People on average file their return in under 30 minutes, and save over 60% compared to Tax Professional on Quicko.com. Thus saving them both time and money.

What inspired you to build the above product/ service?

After working in the personal finance space for over a decade; with the firms like Fidelity and Deutsche; I realized that there is a huge need to disrupt personal finances space with new age technology. I felt that though the common man here was becoming more and more tech savvy, some fundamental sectors such as educational, finance and healthcare were still critically under-served. I saw the lack of tech startups that aspired to solve problems in these areas.

Quicko.com was bootstrapped and an entire team worked very hard to ship it to our customers within 6 months. The team- started with 4 members and ended up increasing to 20 members- worked for 16-18 hours a day to make it happen. Even the security of Customer Data was a challenge. Safeguarding the customer’s data from abuse was extremely important.

To overcome the challenges regarding the customer data, we follow strict security standards such as 256 bit encryption, multi point verification, masked data etc… Plus, all our services are hosted on Amazon’s cloud services that hosts and runs some of the biggest internet brands having a secure, scalable and fault tolerant infrastructure.

At Quicko we extensively use AWS (Amazon Web Services). I would recommend any technology startup to start using AWS. Only with AWS Infrastructure as a Service approach, we have been able to scale it up to serve lacs of customers without procuring single piece of hardware.

With improved digitization and government’s plan to make ITR filing compulsorily online, the number of Tax filers will increase from 34 million people last year, to over 60 million people by 2016. With the increasing compliance, number is expected to rise further. We aim to serve 50,000 users in current assessment year and double it to 1 lac plus in 2016.