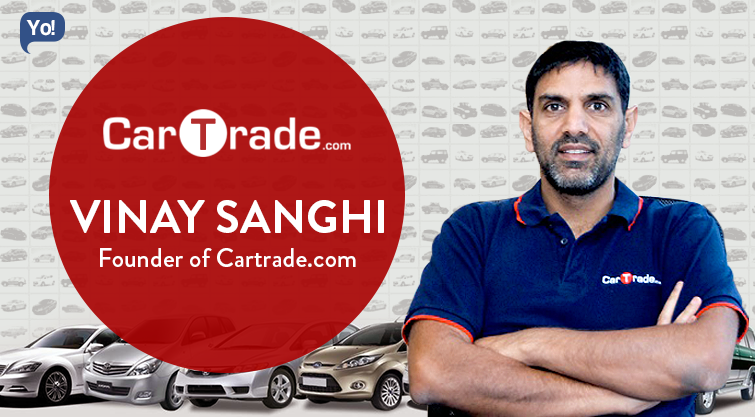 One of the most promising entrepreneurs of today’s Start-up eco-system – Vinay Sanghi is the Founder & CEO of CarTrade.com.

As the name itself suggests; CarTrade is the number one online auto classifieds portal which acts as a marketplace for all those who hold interest in the purchase or sale of new or used vehicles. Currently the portal receives almost 4 million unique visitors every month.

CarTrade accounts for more than 4,000 dealers who are spread across 80 cities around India and also has 20 franchise stores across India. Beyond that, the portal also has more than 165,000 used car listings which include certified used cars as well.

As a person, Vinay is someone who truly believes in bringing about a difference at large, and he accurately achieves that by using his power of unique ideas and entrepreneurship. Additionally, he is a Commerce Graduate from the Sydenham College.

Talking about his favourites; he loves to spend time with his family mainly kids over the weekends, squash is something that keeps him active, and lastly, his live depends on his iPad.

Vinay was a born entrepreneur! He belonged to a family of businessmen, so it is safe to say that business was in his blood. Since his early days itself, while he was studying, he made sure that he was an active part of his family business – ‘Sah and Sanghi’, which was mainly into car dealerships.

After completing his studies, he started running the whole show. This was the time when new cars were more of fancy to people and the used car market either was at a minimum and / or was unorganized.

While he was at it, he noticed that the used car market was broken into pieces fragmented what was even better (for him) was that, there was no one-stop platform where one could find cars or dealers who were selling used cars.

Like they say – “No army can stop an idea whose time has come”, and proving this right, Vinay touched this pain-point and started ‘Mahindra First Choice’ in 2000!

It was a joint venture between the trio – Mahindra & Mahindra, Sah and Sanghi and HDFC.

Over the next 8 years, Vinay – who was the CEO for the JV, very smoothly organized the whole scattered sector, brought-in the culture of used cars and more importantly transformed the organization from being just a start-up into a full-fledge organized used-car retailer.

In 2009, after creating a new vertical altogether, Vinay saw that there now were two kinds of market for cars – New and Used. By now the world within India was moving rapidly towards the World Wide Web, but yet there still lied a gap in it.

He noticed that, there was no marketplace to sell their inventory at prices close to market prices specifically for financial institutions, for their reposed inventory. Heck, there were no standard market prices (especially for used cars)! To add to that, there also a centre-point for consumers and dealers for efficient and transparent transactions, was also non-existent.

MotorExchange & CarTrade.com were founded by Vinay & Rajan Mehra in 2009 & are owned by MXC Solutions Pvt. Ltd.

To give you a short brief about Rajan; he is a Masters in Business Administration from the University of Virginia, has worked for eBay India as Country Manager, currently acts as the Managing Director for Nirvana Venture Advisors and is also on the Board of Directors for various companies like – Games2win India Pvt. Ltd, Housing.com, Quikr.com, etc!

Anyway, the idea was put to work in 2009 and the product was launched in 2012 for its users. The whole concept was basically designed to bring the entire automobile world under one roof, and to become an aggregator to create a sense of efficiency to the car trading practice. By doing so, they also ended the age-old process of visiting numerous dealers to buy a car!

To sum it all, CarTrade Exchange was B2B (Business 2 Business) and CarTrade.com was B2C (Business to Consumer).

Now the question was why would anyone go on to their site – basically USP’s?

Broadly speaking, apart from the many there were three main USP’s: –

Additionally, they also have two types of reviews on site – expert and user reviews. As the names itself suggest, the expert ones are by specialists after researching and driving the cars and the user ones are genuinely written by their real customers.

Now since the time they began and till date, the biggest challenge or a road block the company faces is changing the mindset of the masses in general on using technology and online mediums for such services.

To counter that, CarTrade.com widely marketed itself using a mix of mass media in all aspects including TV, radio and digital to build awareness.

In the next three years; being a pioneer in an untapped market – CarTrade has not only increased the demand for used cars to 1.5 million today (2014), but has also gave a 10-15% boost (growth wise) to the pre-owned car sector.

As they grew, they have also made sure to improvise their website and their strategies time and again, by proposing unique offerings to its consumers.

Some of the changes that automatically enabled selection and trust included – grand inventory of more than 30000 used cars, True Price Buying Index which provided used car’s price information, a certified condition report along with free 100 days warranty and free road side assistance on certain cars, etc. other than that, CarTrade.com also installed numerous filters to help its customers make their choice easier.

By 2014; they had around 30,000 vehicles and 2,000 dealers are listed on their site and were clocking more than a trade of 8000 vehicles every month. They had also grown to a team of more than 350 people, out of which, 250 of them specifically worked on training the dealers for online auctions and also to rope them in. To add to that, CarTrade by now had grown on to receive around 3.7 million customers every month.

And with such great developments, by 2015; CarTrade.com has not only increased their number of employees to an almost double i.e. 700, but has also gone on to gain a mention amongst the top 10 sharply focused Ecommerce players in India by Forbes.

Talking about their funding rounds; so far the company has raised a total of $30.2 Million (Rs.185 Cr.) from Warburg Pincus, Canaan Partners and Tiger Global Management in 2014.

Other than that; MXC Solutions the parent company had also raised $13 million from Tiger Global Management and Canaan Partners in 2011. The money was primarily used for their second online vehicle auction wing CarTradeExchange.com (earlier MotorExchange.in).

Recently, it was also reported that JP Morgan Assent Management has bought out all the investments made by Canaan Partners in India which also includes their investment in CarTrade.

Lastly, apart from being the Speaker at ‘Auto Summit 2014’, the company although has not been able to make their way to awards, but the fact still remains that, they are known to be one of the pioneers & leaders of their market.