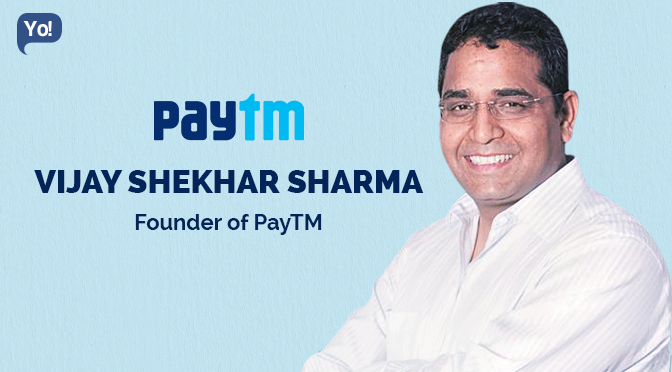 Born & brought up in a small town of Aligarh, Uttar Pradesh; Vijay Shekhar Sharma has risen high to become the Founder of the $1.5 billion PayTM.

Not only does Vijay hold the ownership of India’s most successful internet business, but is also the Founder of One97 Communications, which is the parent company of PayTM, and several other products like mPandit, oc2ps, Oorja, etc.

Being the youngest engineering graduate from Delhi College of Engineering; Energetic, knowledgeable, passionate, driven, positivity are some of the qualities of Vijay that would strike you when you first meet him.

And today when you look at this man who barely knew English, has gone through tough times in his college days, and had also practically lived on the streets with less than Rs15 in his pockets, and has risen to become an epitome of true inspiration to not just entrepreneurs but to the masses in general!

Unlike many others; Vijay’s journey to success was not as easy and smooth as it could be!

Being a topper of his school, he finished his schooling when he was just 13-years old i.e. two years before the rest and got admissions to the engineering college at the age of 15, again far ahead of his age. Anyway, due to that, he had to leave Aligarh and move to the big city of Delhi.

Now coming and living in Delhi from a small town can be pretty scary! Apart from the language barrier, he also had to go through a lot of difficulties. And so, back then, the biggest goal he had in mind was to complete engineering college and take up a job that offered a salary of Rs. 10,000.

What remains a lesser known fact is that; during his college days itself, Vijay had started his own company along with his batch mater Harinder Takhar, called “XS Corps” – a web solutions firm offering web-guided services, including web directories, and was also a search engine!

They had started after receiving a seed investment worth Rs 20,000 from an Individual Angel Investor, a New Mexico-based venture capital fund.

Within a year’s time the company had a turnover of Rs. 50 lakhs and was later sold to “Living Media India” for half a million dollars (now the India Today Group).

Now while he was doing that; he realised that, this was not his thing, he was meant for something of his own, something which had his touch and was far more greater!

Having said that; he decided to do something of his own and quit his job!

Now that he had left his job, he now had to figure out what exactly that he wanted to do?

He realised that the mobile industry had an equal amount of potential as the internet, it was a vast yet untapped pool. Hence, without wasting further time, with the Rs 2 Lakhs that were left with him from the sale of his earlier business, and along with his friend and colleague, Rajiv Shukla, Vijay started One97 Communications Ltd in 2000!

As mentioned on their website; One97 is a company that delivers mobile content and commerce services to millions of mobile consumers through India’s most widely deployed telecom applications cloud platform. Basically, a mobile VAS (Value Added Service) company!

Interestingly, they decided to go with that name because the directory enquiry service number of BSNL was “197”.

Do you remember those pre-mobile internet days when we used to buy ringtones, astrology or any such kind of services??

Yeah, well One97 was the one who provided it to almost everyone!!!

Anyway, in a matter of few years; On97 became the favourite of every kind of business which required mobile content to be promoted and at the same time the service providers loved them too. They were literally everywhere

The Indian market was now becoming more mature and had also adapted well with the use of mobile services. The internet market was booming and at the same time, the VAS market was dropping drastically!

It was time to change the course of their action, now was the time to do something far more bigger than they had ever imagined! 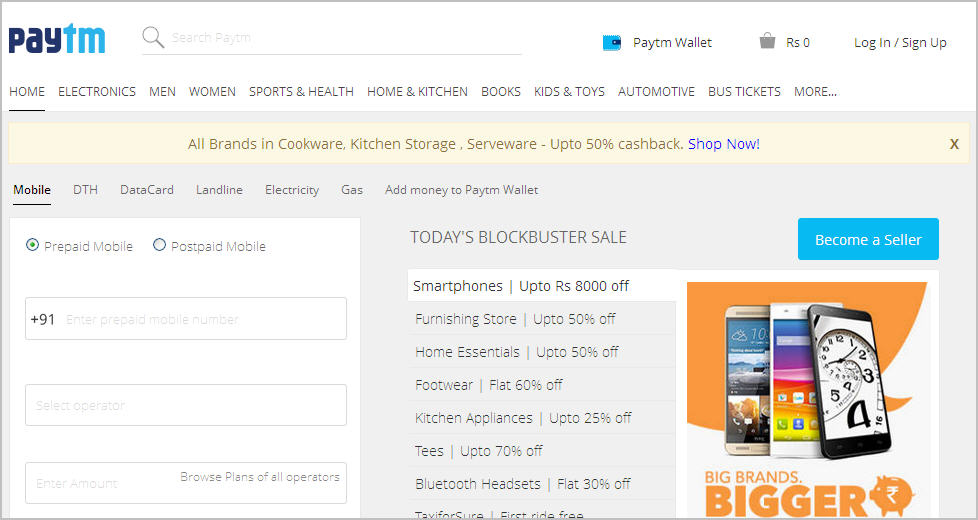 “CHANGE is the only thing constant in the world that we live in”! Likewise, the times for the billing section were now changing too. India was now moving from recharging or paying bills at the outlets to paying for them online!

Hence, in an attempt to enter into the internet market; Vijay under the wings of One97 Communications Launched PayTM!

It all began when One97, with the help of a 4-member team designed and launched their first ever mobile commerce platform in August 2009.

They wanted to play it safe, so back then they initiated their product for B2B customers only. They carried this for quite some time and soon when their product began to receive decent acclaim and obviously after a lot of trial & errors they again in their lucky month of August of 2010 launched – “www.paytmonline.com”.

PayTM short for Pay “Through Mobile” incubated by One97 in the most simplified terms was nothing but a medium through which anybody & everybody could recharge or pay majorly all their bills.

In a much cluttered internet industry, PayTM started as small as a bunny rabbit but at the pace of a tortoise.

During that phase, their marketing strategy completely reliant on some monthly pack offers, Facebook and word-of-mouth; due to which they made an unnoticeable sale of approximately 5-6k worth recharges a day.

But with the grace of hard-work and luck, and after much persistence the company started making a decent sale of INR 100,000 recharges a day, that too within a span of just 4-months. And to add on to their excitement, they also managed to acquire the domain “www.paytm.com”.

Now the best thing about this company was that it didn’t have to rely on venture capitalists for funds and could just walk upto their daddy a.k.a. One97 for it!

The times had now changed and keeping up, PayTM also was forced to change its strategies. They used the major chunk of funds to market themselves more aggressively but at the same time uniquely for which they launched multiple radio ads, released many offers and schemes for the users and initiated net banking. They also made a lot of changes or rather improvements to the product so that it looked more presentable but at the same time was equally efficient and changes to their logo & background was an integral part of that idea.

Competing with the changing trends, they also launched a very first of its kind toll free number “1800-1800-1234” for recharges followed by PayTM mobile apps, etc.

And obviously, with such unexpected & user-friendly changes, the traction was bound to increase.

By the end of the year they were doing recharges worth nearly 1-Crore and had gained esteemed clients like HomeShop18, DishTV, Snapdeal, etc. To maintain their growth they also increased their staffing from 4 to around 40 members.

In the coming years, they also made some notable additions to their current program, some of which included: –

Due to such immense changes; the growth of the company also increased by manifolds in the next few years! PayTM crossed Rs. 1,000 Cr. revenues in the FY13 and was aiming at INR 2,000 by the end of FY14 and was now catering to roughly Six Million monthly users with Seven Million transactions on a monthly basis as well.

PayTM was now the largest digital e-commerce company in India and had reported a growth of an enormous 350% in FY13 which also included a growth in their average transaction size to INR 145 from INR 120.

And when you look at their present growth index; more than 15000 merchants are using their wallet, over 12 million people use PayTM for their bill payments, have over 40 million wallets, have increased their presence to Africa, Europe, Middle East and Southeast Asia as well and also have regional offices in Mumbai, Pune, Chennai, Bangalore and Kolkata.

They are now the preferred mode of payment across leading consumer internet companies such as Uber, Bookmyshow, Makemytrip.

More recently, PayTM got their most required boost in the E-commerce sector, when Ratan Tata – the leading Indian industrialist made a personal investment in the firm.

At the same time, what further added value to their credibility was when, the company received a $575 million investment from Chinese e-commerce company Alibaba Group, and took 25% stake in One97 as part of a strategic agreement.

Additionally; in an attempt to enter into the Indian market Alibaba through its marketplace AliExpress, will also be listing 100-Million Stock-Keeping Units (SKU) on PayTM.

Over the period of years; Vijay, On97 & PayTM collectively have made quite a few investments & acquisitions, some of which include: –