Verizon to combine its latest purchase – Yahoo with AOL, to create the third-l 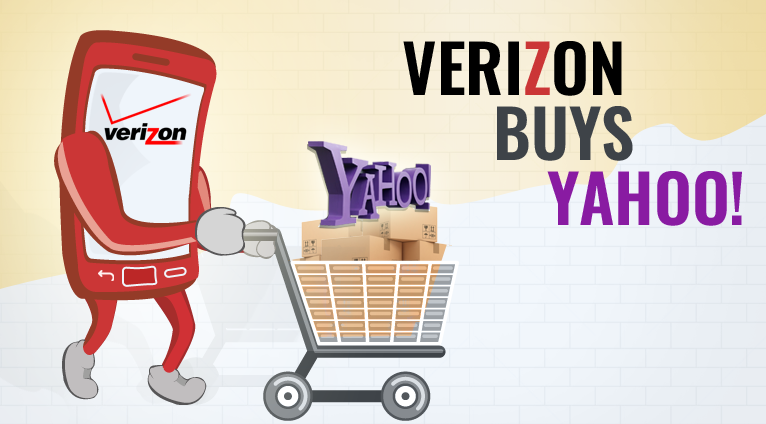 Verizon Communications Inc and Yahoo! Inc (which stands for: “Yet Another Hierarchically Organized Oracle”) announced today that Verizon will be acquiring Yahoo’s core operating business for approximately $4.83 billion in cash, and have entered into a definitive agreement.

This, of course is much lesser than $44 Bn that they had once been offered by Microsoft in 2008, and definitely much lesser than their worth during the Dot.com boom in the early 2000 of $125 Bn.

This deal includes the acquisition Yahoo’s advertising technology and popular online content such as Yahoo Sports, Yahoo Finance and micro-blogging site Tumblr, along with the Yahoo brand and real estate attached to the core business including Yahoo’s headquarters in Sunnyvale, California.

But, what the sale does not include is – Yahoo’s Cash, its shares in Alibaba Group Holdings (15% stake worth more than $32 billion), its shares in Yahoo Japan (36% stake worth about $8 billion), Yahoo’s convertible notes, certain minority investments, and some of Yahoo’s oldest non-core patents related to paid search, search optimization and advertising (called the Excalibur portfolio).

These assets would continue to be a part of Yahoo, but under a differently named entity. This, name change would be done only after the closing of the deal and will also include the registration as a publicly traded investment company.

Verizon will be uniting Yahoo with AOL (the first web portal they had acquired last year for $4.4 Billion), under the leadership of Marni Walden (EVP and President of the Product Innovation and New Businesses organization, Verizon).

The completion of this deal is likely to create a new and powerful rival in the mobile media technology sector that would account for more than 1 Billion users, which would also combine an unrivalled roster of the world’s most beloved brands.

Other than Verizon, Yahoo had also received offers from several other prominent buyers including – AT&T, Billionaires Dan Gilbert and Warren Buffett backed one offer, so did the parent company of Yellow Pages, and private equity firm TPG.

On the other hand, Goldman, Sachs & Co and two others were financial advisers to the Yahoo Board and its Strategic Review Committee, and Weil Gotshal & Manges LLP were the legal advisors to Yahoo.

The deal is subject to customary closing conditions that includes – approval by Yahoo’s shareholders and regulatory approvals, and is expected to close by 2017, thus, marking the end of one of Silicon Valley’s most iconic pioneering companies. But till then, Yahoo will continue to operate independently and normally.

Upon the completion of the deal, Yahoo’s seventh and final CEO – Marissa Mayer will be departing from the company with severance pay worth more than $57 Mn.

But the real battle will begin after the closing of the deal.

After getting approval from the regulator, Verizon faces two-faced challenges: One –– the tough integration process of merging two big teams with thousands of employees (Yahoo – 8,800 employees and 700 contractors and AOL – 6,800 employees) will be tough. Two –– Turning a bleeding yahoo into a money-making, profitable company, otherwise it’s going to hurt AOL’s bottom line.

What will Verizon get for $4.83 Billion?

As a leading US mobile phone network, Verizon has already had a wealth of data from all its smartphone users, and the recent acquisitions of AOL and Yahoo, would directly help Verizon save $500 Mn a year. This amount includes the cost of acquiring internet traffic and other expenses.

Yahoo also connects advertisers with target audiences through their advertising technology that combines the power of their data, content and technology.

So if you look at it from an Advertisers perspective – in a market, where Advertisers are constantly looking for another platform of scale that can reach mass audiences, this deal is like a jackpot and would only help in creating a third platform of scale, which would directly be at par with the worlds only two – Google and Facebook.

Under Tim Armstrong (CEO, AOL), AOL has invested in and grown global premium brands, that include — The Huffington Post, TechCrunch, Engadget, MAKERS and AOL.com, and market leading programmatic platforms – ONE by AOL, for both advertisers and publishers.

And the addition of Yahoo to Verizon and AOL will create one of the largest portfolios of global brands with extensive distribution capabilities, and the combined entity together, will be strong and large enough to compete directly with Google and Facebook in the digital advertisement space, to start off with.

Together, AOL and Yahoo would account for more than 25 brands that includes: Yahoo’s key assets such as market-leading premium content brands in major categories including finance, news and sports, Yahoo! Mail, Flickr and Tumblr as well as AOL’s Huffington Post and Tech Crunch, etc…

What is the $10 Billion Plan of Verizon?

Even though this is a sad day for Yahoo, that was once as big as Google or Facebook during its prime days during the dot.com boom, it does raises interesting questions about its new owner.

So what are Verizon’s ambitions?

The strategic underlying principle for Verizon is to create a large four parts ad platform to one part content.

Clearly, Verizon’s ambitions are visibly obvious! They aim to become a globally media company and wants a larger share of the booming digital advertising pie.

The Yahoo acquisition deal, marked the end of an era for Yahoo, and was another step towards what’s been a multi-year, $10 Bn plan of Verizon (which also includes the $4 Bn acquisition of AOL last year), to take on the biggest names in digital advertising world – Facebook and Google!

Some of their other series of deals include a joint-venture with Hearst to acquire Complex, a stake in AwesomenessTV, and buying Intel’s internet TV service OnCue.

And with this latest acquisition, a combined Yahoo-Verizon becomes the third-largest digital ad network in the US.

What led to the fall of yahoo?

So Yahoo had begun in 1994 as “Jerry’s Guide to the World Wide Web”, by Stanford University students Jerry Yang and David Filo! It, back then was just a list of websites that were curated by these students, which in no time grew on to quickly attract millions of Americans, as they began turning on dial-up Internet connections and needed a home page that would direct them to all their essential destinations.

By 1996, the company was at its peak during the dot.com bubble and had gone public! They were so big that, at one point their shares were being traded at $500 a share, which made them worth a staggering $125 Bn in January 2000.

Having said that – their prime days didn’t remain for long!

Well, Yahoo missed on a lot of opportunities which led to their fall. It missed the opportunity to convert its early lead and millions of users into more than just a portal, and also lost out on the golden change of buying the young Google and Facebook, as well. Instead, Yahoo had gone on to pay a handsome price to buy Geocities for $4.5 billion and Broadcast.com for $5.7 billion, which didn’t help them much.

Later, as “Google” and “Facebook” picked up and became the default platform for search and all things social, respectively, all that was left was photo sharing, video streaming and instant messaging, and Yahoo missed out on that opportunity as well.

The old-fashioned way of knowing which a ‘dying brand’ was, was when a company went out of business”! But, the more recent way is to recognize the first sign was, when we stop talking about them.

And since then, the company has been removing pigeons after pigeons from their hat, to merely survive a bit longer!

In the span of six years, the company changed five CEOs, who weren’t able to give the company a clear direction, as to if it was a media company or a technology company! In fact, over the last four years – Marissa Mayer, the current and last CEO of yahoo had been trying to turn things around for the company, too. To an extent, they also largely missed the mobile revolution as well!

The only thing that kept Yahoo afloat for this long was Jerry Yang’s risky $1 Bn bet in against for 40% on Alibaba in 2005, which eventually went on to become China’s eCommerce king. Although, over the period of time, yahoo did sell parts of the holding in Alibaba, but even after that, their stake is currently valued at $32 Bn, which far more than Yahoo’s flagging core business.

And even thought, Marissa did help create revenue with mobile products, but at the same time, quite a few of her turnaround strategies didn’t really improve the company’s revenue decline. Take for instance: $1.1 billion acquisition of Tumblr, $640 Mn acquisition of Brightroll, big spending on media personalities such as Katie Couric and David Pogue, doubling of mobile spend, dozens of acqui-hires, revamp of key products such as: Yahoo Mail, Flickr, Yahoo Weather and Yahoo Messenger, etc…

“You either embrace the constant, never-ending change; or you perish!” And that’s what’s happened to Yahoo. They Perished!

As Yahoo ping-ponged from a being a web portal to a becoming a media company, and then to a mash-up of both; it completely lost direction!

And this confused strategy, mismanagement, stubborn attitude, un-opportunistic and indecisive nature, led to beginning of their downfall.

Last week, the firm reported a $440m loss in the second quarter of 2016. Frustrated by the downfall and a sliding stock price, activist investors led by Starboard Value LP, pressured Mayer and the board to cut costs and sell off core assets, which eventually resulted in the deal.