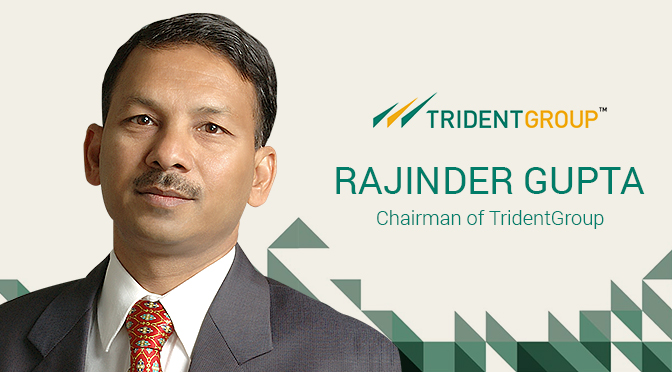 A wise man had once said that; “Power and prosperity are best shared”! That man today leads one of world’s most prestigious – Trident Group!

Born on the 2nd of January 1959, Rajinder Gupta is presently the Chairman of Trident Group, a business corporation with its headquarters located in Ludhiana, Punjab. Trident Group primarily deals in Home Textiles, Paper Manufacturing, Chemicals and Power.

Under his strategically perfect management, the group has grown at the rate of over 30% annually and has gone on to become one of the largest yarn spinners in India, leading global manufacturers of terry towel and world’s largest wheat straw based paper manufacturers.

Rajinder being the first person to enter entrepreneurship possesses over 3 decades of industry experience, and to add to that; he also holds tremendously diversified exposure to promoting industrial ventures & holding Directorship of various companies.

Other than being an active member of several trade and management organizations, Rajinder is also actively associated with quite a few philanthropic ventures too.

Some of the strategic positions that he holds include: –

He is a proud father of a daughter – Neha Gupta who holds a master’s degree in finance from the Cass Business School, London and a son – Abhishek Gupta who recently took over the position of Managing Director in the firm, is a graduate from University of Warwick, UK.

Rajinder was the son of a very small-time cotton trader in Punjab itself. Coming from such an odd background, he was forced to drop out of school at an early age of 14 while he in his 9th grade. Soon after which he began his career by doing odd jobs like making cement pipes, candles, etc and earned a negligible amount of INR 30 a day.

Now back then, who could have known that, this man would go on to become what he is today!

And, after working hard for many years; Rajinder decided to start something of his own in the year 1985.

One thing led to another and with an initial investment of INR 6.5 crores he set up his first ever fertiliser manufacturing plant called Abhishek Industries, on a licence granted by his friends in the Union government.

Rajinder was one of the only few who took several bold risks during a time when Punjab was going through a violent phase and was considered to be highly unstable. This was the time when capital and companies was leaving the state but instead, unlike others, Rajinder took a different route and began establishing industries.

In the year 1991, with the help of his friends in the state government which was then under the governor’s rule, got into a JV in a spindle mill at Barnala, which back then held heavy activities of terrorism.

Being a self-made successful first-generation entrepreneur, Rajinder was now being called the Dhirubhai Ambani of Punjab. He was the perfect example how a true businessman should be!

On 18th of April 1990, the company decided to incorporate itself in the state of Punjab, and with that came into picture – Trident Limited.

And soon after that; for the first time, the company decided to diversify its reach into yarn, paper and terry towels as well.

Having said that; they quickly implemented its yarn spinning project into joint sector with PSIDC! This was being done to set-up manufacturing facilities for cotton yarn which had an installed capacity of 24,960 spindles.

And from here onwards; growth & success went hand-in-hand! The chain of events that took place henceforth are mentioned below: –

Plus the power that it co-generated as a by-product got diverted to the terry towel plant. The company uses advanced technology to manufacturer its wheat-straw based paper which helps in reducing input costs, thus saving roughly 5000 trees per day.

And due to such beautiful progress in the past; today, the Trident Group has become a BSE & NSE listed business conglomerate and operates in five major business segments i.e. Yarn, Terry Towels, Paper, Chemicals and Captive Power.

Currently, the key people of the group who take care of the major functioning include: Rajinder Gupta – Chairman, Pallavi Shroff – Director and lastly Abhishek Gupta – Managing Director / Institution Builder / Member of the Corporate Advisory Board

The flagship company of the group – Trident Limited, today reaches out to customers that are spread in more than 75 countries across 6 continents.

The Group has successfully executed projects worth INR 36000 Million over last 5 years.

To add to that; Trident draws 10% of its Paper segment revenues i.e. INR 7,248 Million by just exporting its goods across 35 countries such as India, Middle East, Africa, U.S., Latin America and the U.K. through a network of 60 distributors.

Their Textile wing contributes to more than 75 % & Paper segment contributes 20% of the group’s total business. Also Trident is widely considered to be one of the lowest-cost producers of paper in the mid-segment. To add to that, their paper and chemicals division also produces sulphuric acid and co-generates soda recovery as well.

Presently, they hold one of India’s largest single-location spinning capacities, which provides the economies of scale in production. Their facilities combine imported state-of-the-art Machineries from Rieter–Switzerland, Murata–Japan, Zinser–Germany and Savio–Italy.

The group has tied-up with some of world’s best technology partners and system providers to get the best-in-class, cost-effective and fast produced products. Being the world’s largest terry towel manufacturer; Trident has been associated with some of world’s most renowned retail companies as its customers, some of these include: Ralph & Lauren, Calvin Klien, Target, IKEA, Wal Mart, Bed, Bath and Beyond, J C Penny, Chris Madden, TJ Maxx, Luxury Linens, etc and many more…

At the same time, unlike many other companies; Trident Group also remains the state’s single largest employer of roughly 1,500 women who are mostly rural girls. And to indirectly benefit the 20,000 families, he uses a mixture of locally produced raw materials for his diverse business portfolio of paper, chemicals, IT, textile, energy and pharmaceuticals.

It has also recently become the first corporate in India to disburse the salaries of its employees using the Aadhaar Payment Bridge (APB), wherein the salary of the employees would be transferred to their Aadhaar Card-linked bank accounts.

Other than that; being the kind-hearted person that he is, Rajinder under the wing of the ‘Trident Group’, has also established and financed many educational and cultural institutes in India, along with that they hold a long history of philanthropic activities too. Some of these include: