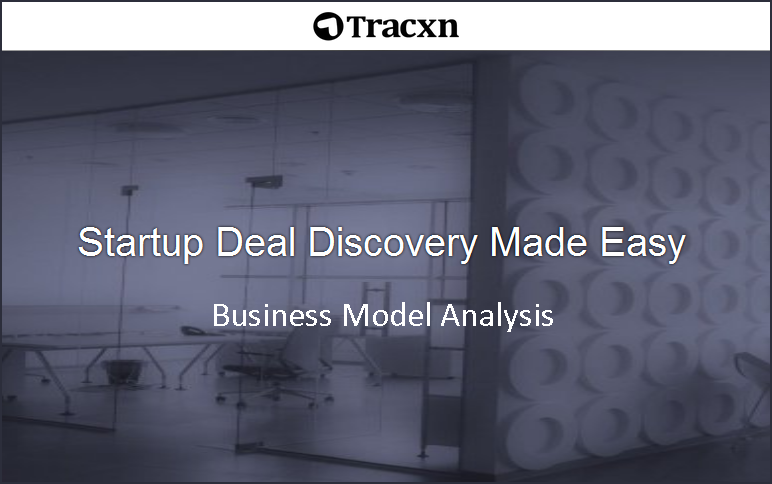 The investment space is turning out to become highly competitive with every passing day. Venture Capitalists (VCs) and Private Equity (PE) firms are seen to be aggressively scouting for the next most promising start-up that holds the potential to go on to become the next big thing.

One common problem, or rather the biggest challenge that all these fund houses face, is to discover very early stage start-ups. There are tens of start-ups that start off daily. Where does one go to, to discover start-ups well before they are launched?

With the help of intelligent data analytics and a sector-focused analyst teams; Tracxn.com, helps global Venture Capitalists, Private Equity Firms, Investment Bankers, Corporate Development and Strategy teams to keep a track of the dramatically growing start-up market and identifying the interesting and investable as well.

Mainly, there are two broad ways in which Tracxn comes to the rescue of investors. Firstly, they help them identify several areas of opportunities through newsletters that tell investors about the kind of sectors or businesses that are becoming interesting; and secondly, Tracxn also help investors in getting in touch with the companies that are coming up in the relevant sectors as well.

Their “Feeds” are curated lists of start-ups in the highly investible sectors, and have also setup up a team of dedicated Analyst who cover each of these sectors, to keep the investors updated with all the information about all start-ups that are coming up in individual sectors. New and interesting start-ups are added every day.

You can browse start-ups on the site by: -

Tracxn has also introduced something called as TracxnSecondary to help early investors re-fuel the start-up ecosystem, by facilitating secondary transactions. Basically, it connects the shareholders of private companies like angel investors with institutional investors, to help them who eventually help these Angels liquidate their illiquid company stocks.

It is aimed at simplifying the way start-ups in India raise money, and also gives individuals the opportunity to invest in promising start-ups by reducing the risk through shared investing. Using their massive “Competitive Intelligence” engine, they also want to help the aspiring and rising entrepreneurs accelerate and build the next great idea.

The Syndicate is backed by Tracxn Technologies Private Limited itself, holds a massive database and army of analysts, and also tracks and follows more than 100 sectors globally and regularly.

Tracxn Labs is an incubator started and backed by Tracxn Technologies, which aims to nurture and help founders and potential entrepreneurs to get the right start.

Tracxn Labs helps start-ups in – Ideation, Accessing Tracxn’s sector research platform to scan relevant markets, working in tandem and closely with their Analysts to understand global mega-trends, Discussing propositions with the team and getting quick feedback, and a lot more…

Their Process is pretty simple: -

They begin by identifying gaps in every market that they have tracked for over 6 months, post which, they look out for teams who are interested in working on these ideas who also hold relevant skill set.

What is Their Revenue Model?

At this point, they follow a pretty straightforward business and revenue model. Since this is a SaaS (Software as a Service) platform, they charge Venture Capitalists and all other types of fund houses a monthly subscription to avail their services.

Internationally, these fund houses pay anywhere between $1000 and $10,000 per month or $20,000 and $90,000 per year, depending on how many feeds they wish to subscribe to; while the companies based in India typically pay Tracxn somewhere around 75K to 3L per month.

Earlier, Investors and / or corporate development teams mainly used to rely primarily on their personal network, media coverage, events or for that matter Google, to discover the promising start-ups and market trends. Smaller funds or Angels even tracked Job Boards, while larger fund houses had built sizable teams of Analysts to fulfil the purpose.

But either ways, all of these were very resource intensive and required time consuming efforts.

Hence, they decided to primarily focus on targeting the investor market, while their secondary target audience became the corporate development and business development departments of companies.

At this point, Tracxn covers start-ups across major ecosystems like the US, India, China and Southeast Asia, and the US is said to be the biggest market for them.

Tracxn leverages the increasing digital footprint of start-up companies to collect the necessary information, and combines it with technology to address this pain-point efficiently and that too, for a fraction of the cost of what large funds spend today to achieve the same.

Tracxn has been founded by two Ex-VC’s Abhishek Goyal and Neha Singh in 2013!

Abhishek completed his Bachelor of Technology in Computer Science from the IIT (Kanpur) in 2002, soon after which, he started his career with Yahoo as a Software Engineer in the month of December of the same year.

After working there for around a year and a half, Abhishek joined Andale in 2004 as a Software Engineer, and worked with them for about six months.

This stint was followed by his first Entrepreneurial Venture called ResumePro in 2004 itself, post which, he joined Amazon in February 2006 as a Software Developer.

Later in 2007, he joined 3i-Infotech as the Head of Technology, IISG for about a year and then joined Accel Partners in January 2008 as an Associate.

This 3-year of profile was further succeeded by his second entrepreneurial venture called UrbanTouch.com in January 2011.

And then finally, in 2013 – he along with Neha started Tracxn.com!

Neha completed her Master of Business Administration (MBA) from the prestigious Stanford Graduate School of Business in 2014, and also holds a Bachelors and Masters Degree in Computer Science Engineering from the Indian Institute of Technology (Bombay)

She started her career with The Boston Consulting Group as an Associate in 2008, and was responsible for the Consumer Goods, Retail, Energy and Telecom markets.

After working with them for about 2 years, she moved to join Sequoia Capital as an Investment Analyst in June 2010 and was made responsible for Early / Venture / Growth Stage Investments, along with Internet, Tech and Mobile sectors as well.

And finally, in 2013, she along with Abhishek started Tracxn in Palo Alto!

So it dates back to their days with the VC firms!

While at it, their profiles required them to help identify prospective start-ups and make investment decisions.

Now as difficult as this task was, given the fact that, Start-ups usually avoided disclosing information about their privately held firms, making it a constant struggle for them to collate information from several sources, they somehow had to manage it.

For discovering start-ups, they mainly relied on the internet and their personal network, which too, had the risk of missing out on an exciting start-up.

Their only wish was to spend more time on analysing markets and opportunities, rather than wasting time on finding a start-up. And this problem motivated them to find a way to bridge this gap for investors, at large!

That is when Abhishek and Neha got together and decided to leverage technology to address this information gap and eventually, quit their jobs in 2013 to start Tracxn!

Their idea for Tracxn was to transform it into a combination of “Bloomberg + Gartner for Start-ups”.

To do so, they built a technology that could track all information around private companies and also hired expert analysts to collect and organize the information and draw insights from it as well.

In a matter of a year’s time, Tracxn had gone on to create the largest start-up database which covered more than 10 million companies. Interestingly, this database was 50 times larger than other start-up databases! Additionally, they also included Rich Profiles and Traction Metrics that got collated from across dozens of sources as well.

By the end of this year, the company had not only turned profitable, but had also begun focusing on operations in the emerging markets – India and China as well.

According to documents filed with the Registrar of Companies (ROC), Tracxn had posted revenue worth Rs. 2.31 crores for the year that ended on 31 March 2015, which was a drastic jump from Rs. 9.78 lakhs in the previous year.

They had also increased their team strength to 40 and were in preparations to further increase it to 150.

By the end of 2015, their database had reached to a whooping 25 million companies, and had more than 200 funds, mergers and acquisitions specialists, product managers, founders and aspiring entrepreneurs as their clients as well.

Additionally, Tracxn Labs had also funded 30 companies since their inception in June 2015 and also had plans to strike 60-100 deals every year as well.

More recently, they have also announced a growth in their customer base by over 400% and now holds a client base which includes reputed names such as – BMW, LG, GE, Qihoo, VMWare, Target, Vodafone, Bosch, etc, in addition to Venture Funds like Andreessen Horowitz, NEA, Lightspeed, Sequoia, SoftBank, Google Capital, as well.

Going ahead, they would now be expanding their market to countries like Malaysia, Indonesia, Singapore, Philippines, Vietnam and Europe to build its global database.