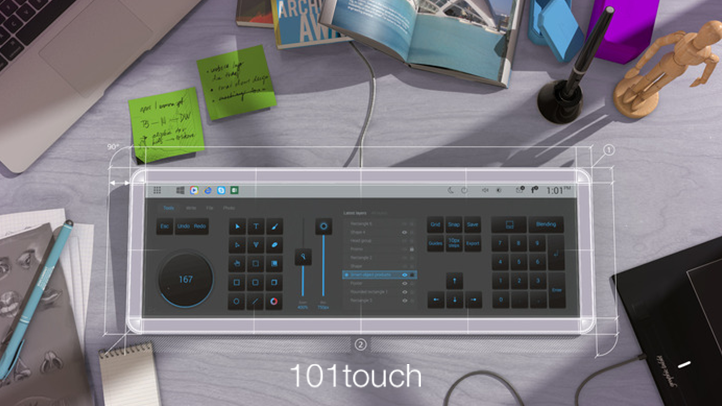 In the last few years, we have seen that technology has taken a huge leap! There’s a whole new evolution which has taken place in a very short period of time. From crappy desktops we have ruthlessly moved on to classy laptops, Smartphones, portable tablets, phablets and recently iWatch. In short, we have moved from type to touch which now apparently is the new “In Thing”! Keeping that in mind, we have our latest entrant – 101Touch!!!

101Touch a Czech Republic based invention, as the name itself suggests is a touch keyboard but not just limited to typing. It holds a whole lot other functions that will revolutionize the typing functions and will give a totally new perspective to computer control, thus bringing back the dying desktop computers.

The idea of 101Touch emerged when the makers were frustrated by the inflexibility of the traditional keyboard and not to forget the zillions of shortcuts that they had to remember for every different program or game. That’s when they thought of making a keyboard that is flexible, easy to use and with multiple features without having to remember shortcuts. Thus after three years of rigorous hard work and overcoming all the complications, 101Touch evolved!

Presently, the keyboards comes with an 18.3 inch display, ARM architecture processor, 101Touch operating system with core Android OS, 16GB of internal memory, USB & Bluetooth connectivity and lastly, the keyboard has its own battery.

101Touch has a friendly and intuitive interface which does not require much of understanding or explanation. It holds a speed that is far more faster than the normal keyboard. The touch keyboard works on all devices including all operating systems like MS-DOS, Windows, Linux, OS X and BIOS. 101Touch holds a unique element called an “emulator” between the computer and the 101touch keyboard which makes the same possible.

People in general prefer using hardware that does not require installation like plug-&-play and the same ideology has been applied to 101touch. Its system is based on the core of android technology and has been built to be liquid-proof & at the same time is also dirt-resistant. Here you do not require remembering shortcuts to the keyboard to perform certain actions. Everything is available in front of your eyes. Along with that, you are also provided with a mouse-like feature to perform all the activities that your mouse did earlier.

You don’t have to purchase special input devices or download softwares for actions such as video editing, sound mixing or playing games; all these functions can be performed on this keyboard itself. Games can never be more fun while playing on this keyboard and you don’t need to remember or search for control keys for two-player games too. Everything has already been integrated on the device itself.

The keyboard also comes with a time-lock, especially designed for the parents who wish to keep a control on their kid’s usage of computers. With the help of this feature, you can preset how long the keyboard can remain active and when the time is up the keyboard automatically shuts itself down, till a password is not entered to reactivate it.

Now all the functions and features are available at a mere slide. If you wish to switch from some function to the standard keyboard all you need to do is, slide towards the right. You can also switch between a numeric keypad, touchpad or a calculator. To top that, there are many keys which we normally don’t use, these keys have smartly been replaced with most commonly used functions like open, save, save as, print, etc! Also, you can place a link to your favorite website or add any other function at any given point of time.

Another unique feature of 101Touch keyboard is that, by hitting the CTRL key you can dynamically change the configuration of the keys which means that, after you hit the key, you can change the name or color of any given key as per your convenience. And lastly, while using 101Touch keyboard you will come across infinite list of useful layouts which may be required to simplify your tasks or enhance any entertainment. Additionally, there is a shop on the keyboard itself where you will find different kinds of keyboard configurations that can be browsed and installed.

Apart from its elegant technology, what will make 101Touch a hit is its coolness. The product literally has world class features and indeed has the potential to revolutionize the way keyboards are being used. The only thing which needs to be looked at is how they would respond to different operating systems; which definitely can be resolved with minor tweaks.

All-in-All, worth every penny!