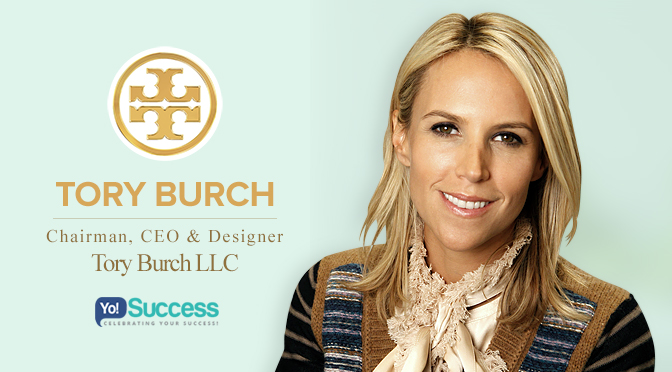 Born on 17th June, 1966 as Tory Robinson; Tory Burch is the Chairman, CEO & Designer of Tory Burch LLC. Being an American fashion designer, self-made business woman and a philanthropist, Tory has won several fashion awards for her work and as of date, with a net worth of $1 billion – she is listed as the 79th most powerful woman in the world by Forbes.

Tory – the daughter of a former actress mother & a wealthy investor father i.e. Reva and Ira Earl “Bud” Robinson, was born in Valley Forge, Pennsylvania & was raised with her three brothers Robert, James and Leonard in a 250-year old Georgian Valley Forge farmhouse, near the Valley Forge National Historical Park.

She completed her schooling from the Agnes Irwin School in Rosemont, Pennsylvania and much to everyone’s surprise; she was a tomboy who rode horses and was the captain of the tennis team as well. Transformed; Tory became a member of the sorority Kappa Alpha Theta at the University of Pennsylvania, which she entered to complete her graduation majoring in art history.

Tory has had two marriages so far! First, she got married to William Macklowe, son of real-estate tycoon Harry B. Macklowe in the year 1993 but due to unknown reasons got divorced within a year itself. Roughly three years later in 1996; Tory got married to J. Christopher Burch, an investor in Internet Capital Group, but ten years later in 2006 both decided to go their separate ways.

Even after the divorce; she continues to use his last name and presently has three sons (Henry and Nick, identical twins, and Sawyer) and three stepdaughters (Alexandra, Elizabeth, and Louisa).

Lastly, Tory has also been rumored to have dated some high profile names like Lance Armstrong in 2007 and more recently, Lyor Cohen, the former chairman of Warner Music Group & Fiona Kotur, her friend and a designer who lives in Hong Kong.

To begin with; Tory always credits her parents for the eclectic and worldly style, she has inculcated and now influences her own design style. Tory considers their way of dressing, unique sense of style, fine detailing, etc., as one of her biggest inspirations in life.

Tory began her career with Benetton in the King of Prussia Mall, which although was nothing serious but did help her with some experience. Soon after she graduated from college, she moved to New York City and joined Zoran – a Yugoslavian designer and later moved on to Harper’s Bazaar magazine.

Other than that; she also worked with Vera Wang, Polo Ralph Lauren and Loewe in public relations and advertising positions.

While at Vera Wang, tory often used to run into Chris Burch! Soon both got married in 1996 and in a snap of time; she was living in a house full of six children. This situation, evetually started to become extremely difficult for her; to work and to be a full-time mother.

Although, she gave up her career for her children, but tory being a career-oriented woman just couldn’t take it and began to grow “restless.” She began to create scrapbooks with paper cuttings from books, magazines, etc., and later showed them to prominent fashion designers, who let me tell you were quite impressed with her ideas.

Motivated by the inspirational commercial about “following your dreams” that aired after 9/11; Tory finally decided to take the leap into fashion designing!

Having decided that; she borrowed $2 million from her retail tycoon husband – Christopher Burch and although she had never designed any clothing, Tory opened her own fashion line in 2004. Initially she called her fashion label, “TRB by Tory Burch”, but later changed it to “Tory Burch”

Tory began her first New York City boutique at the retail mecca of NoLita with signature pieces of ‘Reva’ ballet flats and tunics. This was soon followed by Toryburch.com in 2005 with a clothing line of “preppy-boho” and was credited with making T-shirts trendy again.

The turning point of her business came when she appeared on The Oprah Winfrey Show in April 2005. She was so impressed with Tory’s work that she went on to call her “the next big thing in fashion.” And there was no looking back from here onwards; her stardom skyrocketed. As a matter of fact; her website received eight million hits on the very next day of the show.

While her business was in the upward direction; her personal life downturn and was hit with a bump in 2006, when Tory and Chris decided to part ways and had filed for a divorce. But being the shrewd professional; she always maintained a cordial relationship with her ex-husband and never let her personal failures seep into her business.

Moving on; in 2009, a minority stake in her company was sold to a Mexican private equity firm, Tresalia Capital by Tory. Soon this was followed by their debut in the “New York Fashion Week” in 2011 which was highly praised by the critics, especially “Vogue” who specifically said: “Bravo, Tory Burch, then, for brilliantly flying the flag for sparkling newness without forgetting that great clothes should feel joyful and uplifting without being entirely devoid of practicality.”

In 2012; Tory and Chirstopher (her ex-husband) arrived to a settlement on their longstanding legal dispute; which led to the sale of chris’s stake in the firm and made way for new minority investors. This settlement also cleared a major obstacle to their forthcoming IPO, which was literally the talk of the town; be it, financial or the fashion industry.

By 2013; the company which had expanded to 83 stores went on to grow upto 140 Tory Burch stores worldwide in 2014. Her clothing line which was earlier being carried on in more than 1000 stores, is now carried in 3,000 department and specialty stores including Saks Fifth Avenue, Bergdorf Goodman, Neiman Marcus Nordstrom and Bloomingdale’s, Harrods, Harvey Nichols, Galeries Lafayette, Lane Crawford and Isetan, worldwide and not forgetting their website Toryburch.com, too!

Today, Tory Burch as a company has successfully transformed itself into an American lifestyle brand that inscribes the personal style, fashion ideology and sensibility of its Chairman, CEO and Designer – Tory Burch herself!

This has led to the successful expansion of their flagships in New York, Los Angeles, London, Rome, Tokyo and Seoul which include a fashion line that encompasses ready-to-wear, shoes, handbags, accessories, watches, home decor, and a fragrance and beauty collection. And as of date; “Tory Burch” as a company, is valued at more than $3.5 billion.

Tory is a die-hard philanthropist at heart; she has done a lot and continues to do so for the society at large. Below mentioned are some of her past initiatives: –

A board member of the:

Flip through the stacks of glossy magazines, and be sure you will find Tory Burch; From New York to Shanghai, walk down any sidewalk, and guaranteed you will see women wearing ballet flats or patterned tunics, clutches, handbags, bold country club–chic pants, dresses, skirts, and tops with Tory Burch’s logo.

That’s Tory for You!

Tory Burch hasn’t just made preppy clothes hip and modern or for that matter she’s hasn’t just built a multi-billion dollar fashion empire in pretty much less than a decade; but she has created a spark, inspired women to believe in themselves and to go achieve their dreams.

She has successfully managed to empower female entrepreneurs globally!