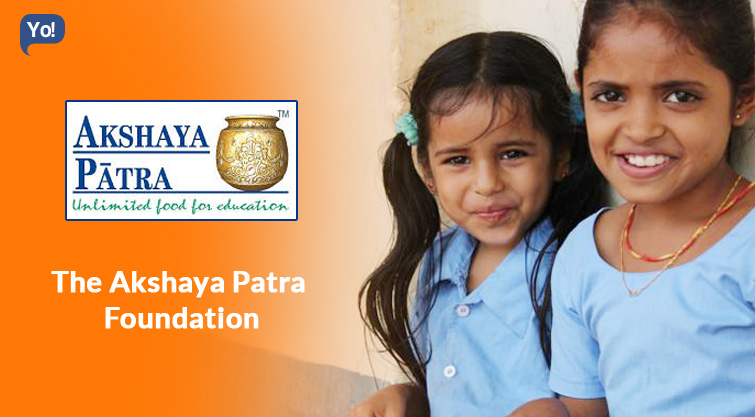 The Akshaya Patra Foundation commonly known as Akshaya Patra, is a not-for-profit organization that was started in the year 2000  feeding 1500 children across  five government schools in Bengaluru, and mainly addresses two of the most immediate and dire challenges of India – hunger and education.

With a vision of “No child in India shall be deprived of education because of hunger”, Akshaya Patra Foundation operates from its registered offices in India, the UK and the US, and is on a mission to reach out to 5 Million children by 2020.

Akshaya Patra is a marriage between missionaries and people from corporates, work with a heart of NGO and a brain of a NGO , a faith-based group in India, which included leaders who worked in the private sector before their religious service. They managed to bring in a tradition of service to people and an experience of cooking for thousands of people at a time at their temples. The second group compiled of Senior Executives from Infosys and other IT Companies who had spent decades solving complex global problems, for a list of world’s largest companies.

The Foundation’s programme called “Mid-Day Meal Scheme” is the largest such programme in the world, serving food to over 1.5 million children from 10,845 schools across 10 states in India. 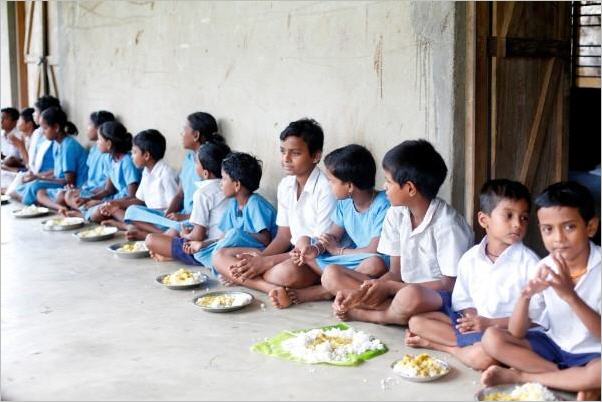 The organization is also known to work on ground breaking philosophy, technology and strategic initiatives with organizations and people from different walks of life including partnerships with the Government of India, State Governments, Corporate Houses, and Philanthropic donors and well-wishers.

The Foundation is eligible to provide income tax benefits to its donors under section 35AC of the Income Tax Act of the GOI, and any donation of above ₹750  to the NGO is eligible for 100% tax exemption under this Act as well.

So What Makes ‘The Akshaya Patra Foundation’ Unique?

The Programmes Run by ‘The Akshaya Patra Foundation’

to counter classroom hunger, and when the Supreme Court of India passed an order directing the State Governments / Union Territories to initiate the Mid-Day Meal Scheme, Akshaya Patra was called in to partner with the governments to implement the Mid- Day Meal programme.

Mid-Day Meal Scheme was / is aimed to:

Akshaya Patra currently runs its operations across 24 locations in 10 states of India through two kitchen models – Centralised and De-centralised. 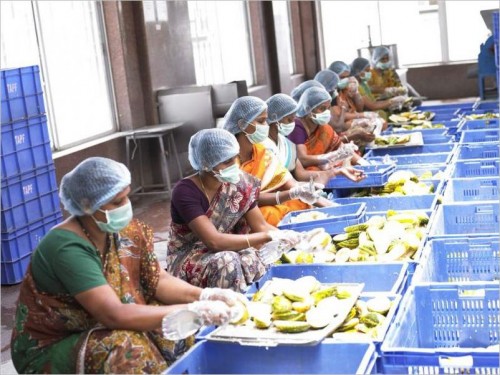 They brought the best thinking in manufacturing, supply chain, innovation and logistics management to create kitchen’s, many of which are ISO-9000 certified, are really food factories, capable of cooking food daily for up to 200,000 people each. For Akshaya, hygiene and cleanliness is of utmost importance their kitchen infrastructure will give an overview of its compliance to Food Safety and Quality Standards as well.

The technology and process used in their kitchens have been a topic of research and study in the course curriculum of many renowned universities such as AC Nielsen Impact Study and Harvard Case Study, and some other government studies as well.

The summary of findings of the impact studies include – Increase in enrolment, Increase in attendance, Increase in concentration, Improvement in socialisation, Decrease of malnutrition and Empowerment of women.

Akshaya Patra also serves as a Member of the National Steering-cum-Monitoring Committee (NSMC) for the Mid-Day Meal Programme too.

Other than these, Akshaya also runs several other Feeding and Socio-Developmental Programmes, such as: -

The Akshaya Patra Foundation had been founded by Madhu Pandit Dasa in 2000. Under the leader of  MadhuPandit Dasa, Chairman and Chanchalapati Dasa, Vice Chairman the organisation is run by Shridhar Venkat (CEO), who manages a team that consists of individuals with specific skills in fields of Management, Operations, Finance and Accountancy, Communications, etc…

Born in 1956 in Nagercoil in Tamil Nadu; Madhu Pandit Dasa (formerly named as Madhusudan S) is the founder of The Akshaya Foundation.

He has completed his Bachelors in Technology in Civil Engineering from the prestigious IIT (Bombay) in the year 1980, post which, he went on to pursue his Masters in Technology from IIT (Bombay) itself. As a degree student, he had also been selected by the National Science Talent search program of the country. 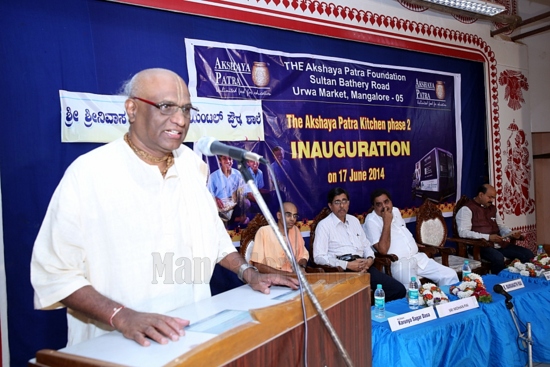 While at IIT, he had grown interest in the books of Srila Prabhupada, the founder-acharya of ISKCON Foundation. As the time passed and he moved to complete his Masters, his interest grew so much that he decided to dedicate himself to the service of Lord Krishna by becoming a full-time missionary member of ISKCON.

Today, he holds various management positions at the ISKCON foundation and its subsidiaries, some of which include: -

Since then, a long list of accomplishments have been listed under his name, one of which being the initiation of Akshaya Patra Foundation!

Shridhar presently acts as the Chief Executive Officer of The Akshaya Foundation since the past 2 years, before which, he held the position of Executive Director.

While at it, he oversees all the executive functions which include – Resource Mobilization, Communication, Finance, HRD, IT and Operations Excellence Initiative, etc…

Overall, he holds a work experience of more than 23 years which includes association with leading multinationals such as Philips, ABB, Webex Communications (now CISCO), etc.

He holds a Bachelors Degree in Electrical Engineering from the Government College of Engineering Karad, Master’s degree in Marketing from Narsee Monjee Institute of Management Studies, and is a graduate of Advanced Management Program from Wharton Business School.

Their Story & Their Growth

The story of Akshaya Patra remains one of the most successful stories depicting hope, fairness, justice and opportunity for all children.

Looking out of a window one day in Mayapur, a village near Calcutta, Swami Prabhupada saw a group of children fighting with stray dogs over scraps of food. This heart breaking incident, determined him to make sure that no child within a radius of ten miles from their centre would go hungry. Since then, this principle had been adhered to by the ISKCON foundation.

As the process of feeding the hungry continued regularly, the number of children began to increase by every passing day as well. One day, on speaking to some of these children, Pandit Dasa learnt that these kids either didn’t go to school or left early to make it to the temple for lunch.

To make sure their education wasn’t affected, he decided to send food to the schools themselves. In no time, they were sending food out to 1500 children in schools across Bangalore.

Soon, teachers and principals from other schools began writing in to ISKCON, asking them to feed children at their school too. What was even more complimenting was that kids from non-ISKCON supported schools had begun leaving to join schools that benefitted them with temple’s food programme.

This also showed how urgent the issue of Hunger was!

By now they were feeding children at over a lakh schools, but had also begun to feel the pinch, when it came to operations and management of the whole thing. The main concern was the lack of vessels and vehicles to pack and transport the cooked food to the schools.

So Madhu Pandit Dasa discussed the idea with prominent personalities with whom he was in touch with through the activities of the temple, and received help from people like Mohandas Pai, Narayan & Sudha Murthy, Abhay Jain and many others.

Mohandas Pai stepped in by donating the first vehicle to deliver food, while Abhay Jain assured to get more donors to further strengthen the programme. 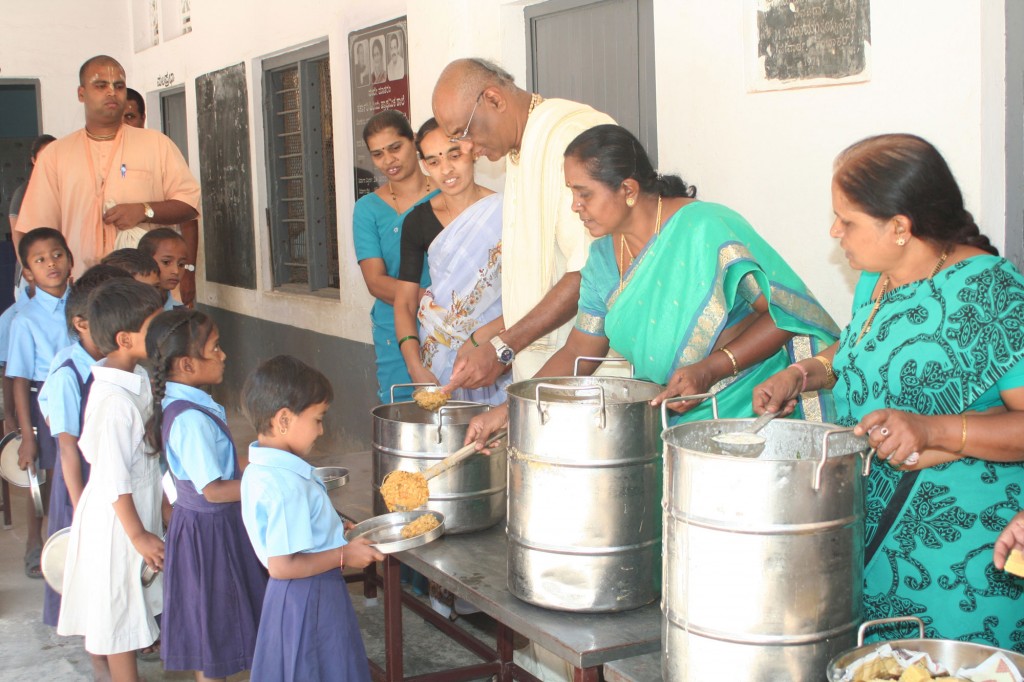 In 2000, The Akshaya Patra Foundation formally born and started the mid-day meal programme in Bangalore in Karnataka.

With a considerable amount of donations in place, they also introduced state-of-the-art resources and technology to manage and maintain the quality and operations.

Soon they also partnered with the Government of India and various other State Governments and their departments, to serve cooked meals at all Government schools.

The lists of achievements that they have accomplished are far beyond anyone’s imagination. Apart from helping the needy, the organization has also begun helping the environment by going green and replacing their gas stoves with Oorja stoves, which use biomass pellets such as processed organic waste such as banana peel, groundnut shells & other waste wood as fuel.

Within a span of 14 years, the Foundation has expanded its footprint to cover over 45 million children in 10 states and 24 locations across India, with nearly 330 million meals cooked, delivered and eaten every year.

Today, through the partnership with the Government of India and various State Governments, as well as philanthropic donors and well-wishers; the organisation runs the world’s largest mid-day meal programme to deliver a nutritious and hygienic school lunch.