Tata CLiQ: The new to-be giant in the eCommerce market! 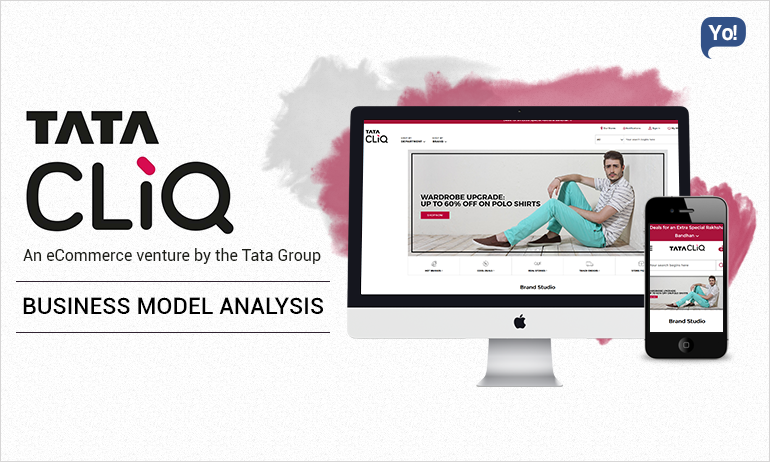 While the top players in the Indian eCommerce playfield are promoting cut-price competition and heavy discounts, and incurring millions in losses, Tata Group is seen to be going against the trend with their latest eCommerce venture “Tata CliQ”.

What started as a close-door project for nearly 18 months named as ‘Tata Mall’ back then, was recently launched as TataCLiQ.com — is the short answer to the –– ‘what’s TataCLiQ?’

But who wants to know the short story. Let’s go deep!

What is Tata CliQ?

Tata CliQ – a venture initiated by the Tata group under Tata Unistore, is their much-awaited eCommerce platform that offers consumers a new shopping experience in apparel, electronics and footwear categories.

CliQ is a combination of — “Clique (elite) and Click”, which curates authentic and exclusive products for customers with impeccable taste. Tata Industries owns 90% of Tata Unistore, and the rest is owned by Trent, another Tata Group company that operates retail chains such as Westside, Star Bazaar, and Landmark.

Tata CliQ is the online shopping portal in India that offers genuine [branded] products delivered to your doorstep from your favourite brands. It is a smart combination of in-store experience of a large on-ground network with the convenience of online shopping.

Their stockpile includes 30000+ authentic products from 400+ Indian and International brands across Electronics, Fashion, and Footwear, sourced directly from brands and brand-authorised sellers, with Tata CLiQ assurance and money-back guarantee, and at unbeatable prices and promotions.

Some of their really cool features include: QR Code and Barcode scanner to help you easily find products on their app, native Voice Search, Visual Search (that can be used with just a picture of a product), ‘Que magazine’ is about real people and real stories about the latest trends, etc…

Tata CliQ follows a “curated marketplace model”, wherein they sell products from major brands and retailers, and play around with the exclusive nature of their model by sourcing directly through their approved retailers.

Unlike normal online marketplaces where sellers are free to sell any and every product, CliQ maintains their exclusivity by carefully choosing the kind of products that they display on the platform, and have also formalised strategic partnerships with a long range of such international brands, which offer exclusive range of products, as well.

Whatever their breed be – Westside, AND, Vero Moda, Croma, HP, Apple, etc., doesn’t matter! And since what you see is what you get, buying a camel becomes very easy too.

Talking about their shipping and deliveries – the products are shipped directly from the brand’s stores to your doorstep or can also be collected at the dedicated CLiQ and PiQ kiosks at 100+ stores as well.

And in cases, if you’re not happy with what you see then, you can ask for a pickup, or just walk into a nearby partner store to make the exchange.

What sets them apart is their three-pronged strategy which is anchored on Brand Stores, Phygital Strategy (‘Phygital’ – a combination of Physical and Digital) and a curated approach to sales, products, and after-sales service!

‘Phygital’ means having a digital as well as physical presence and an experience wherein one can buy a product online and chose to pick it up from any of their CLiQ and PIQ stores.

This model not only helps them to reduce the turnaround time for the company but for the customer as well, in cases the product needs to be returned. In addition to that – this strategy also cuts down the need to have their own warehouses; thus, bringing down the operational costs considerably, too!

Tata CLiQ has partnered with several brands from markets around the home country along with UK, France, Germany and Russia to curate its offerings.

They have also formed a strategic partnership with “Genesis Luxury Fashion” to offer their range exclusively in India!

On the other end – they have also partnered with the likes of Microsoft Corporation to sell Microsoft products through the eCommerce portal.

At this point, they are targeting the Brand-affined urban sect of the society, and to reach out to them efficiently, CLiQ has been made operational in 6,856 pin codes, of 23 States and 2 Union Territories across 689 cities and towns.

Tata CLiQ believes and wants to follow an asset-light marketplace model, in other words, the Omni-channel model, wherein say for example, a washing machine can be made available to a customer from the nearest Croma store, while the external brands are sourced directly from the warehouses of the manufacturer or their authorized seller.

Due to this strategy, the company is able to drastically cut down its dependence on two heavy overheads of any eCommerce company – warehousing and logistics. This also gives Tata CLiQ a cost advantage of around 5-6% points when it comes to procuring products for the marketplace. Plus, it also helps in efficiently managing the inventory.

And operationalising every store and managing a range of brands and retailers on the platform is going to be the key!

Additionally, CLiQ has also outsourced much of their manpower requirement to other group companies like Tata Consultancy Services (which has also helped them with the IT of the business) and Tata Business Support Services Limited, their Business Process Outsourcing wing.

Talking about their marketing strategies – CLiQ has recently launched their advertising campaign called ‘#SureThing’, which is a delightful, witty, quirky take on online shopping, the campaign focuses on TataCLiQ.com’s USP of being the #SureThing in shopping.

Tata CLiQ is currently led by Ashutosh Pandey, as the CEO of the brand!

An MBA in Marketing, HR and Finance from the University of Delhi, and a Civil Engineering Graduate from the BIT Sindri started his career Tata Administrative Services in June 1998 as a TAS Manager, soon after his graduation.

Post which, he stuck around and went on to work with them for several of their subsidiary brands including Tata Tea Limited, Rallis India Limited, Tata Communications, The Indian Hotels Company Limited (Taj Group of Hotels), Landmark Limited, and Tata Industries Limited. During this phase, he also had worked for Accenture Consulting as well.

Tata CLiQ was envisioned by the team at Tata Industries under the guidance of Executive Director KRS Jamwal.

What Google was for search and Facebook was for social networking, they a similar differentiated offering that would work towards innovation and customer value, but at the same time create its own exclusivity.

After doing their research of various Business models across the globe and after analyzing consumer pain points, they decided to narrow down to their own unique solution of the Physical model (a marriage of Physical shopping benefits and Digital shopping convenience)!

These pain points included unavailability of these brands and mistrust and lack of authenticity for the international brands from Indian consumers that prevented them from buying here in India.

At this point, there were two sets of players – the retailers and the eCommerce marketplaces that ruled the market! The team believed that eCommerce was now in its e-retail 1.0 phase, and was gradually making way into the phase 2.0.

Hence, in attempts to be the leader of phase 2.0; CliQ, was launched as the country’s first online Omni-channel marketplace in the dog-eat-dog online retail world!

They initially started off their eCommerce website and mobile application with apparels, footwear, and electronics, but are in preparations to add categories such as accessories, home furnishings, and jewellery. These will include international and Indian brands as well as in-house products.

By 2025, it is being anticipated that the online merchandise sales will jump up from $220 Bn in India from $11 Bn, and CLiQ wishes to acquire a significant position and market share of it, and to do so, unlike their competitors, CLiQ would be focusing on profit margins and unit economics,  then just growing sales via discounts.