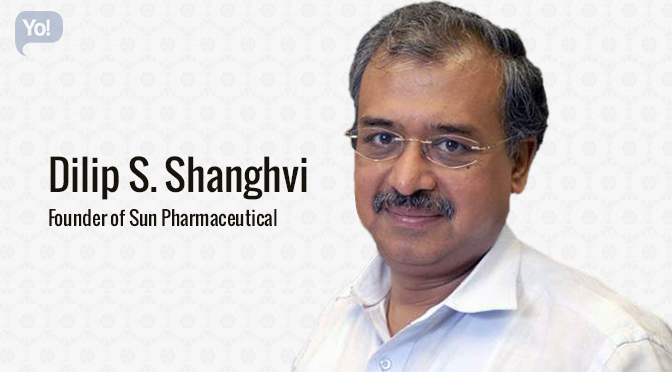 Born on 1st of October 1955; Dilip Shantilal Shanghvi with a net worth of $19 billion is the 2nd richest person of India and along with that is also the founder & managing director of Sun Pharmaceutical.

Born to a Gujarati family in Amreli – a small town of Gujarat, Dilip started Sun Pharmaceutical in the year 1982 at Vapi, Gujarat by borrowing his friend’s equipment and Rs 10,000 from his father. He initiated with five psychiatry products and has gone on to become India’s largest drug maker and most valuable drug company of today.

To add to that; Mr. Shanghvi’s Sun Pharmaceutical Industries is considered to be India’s most valuable drug company and holds a market cap of a whooping $27 billion.

Dilip bhai (as his close aids like to call him) holds a Bachelors degree in the field of commerce and is married to Vibha Shanghvi – who coincidentally is a pharmacist.

Dilip bhai holds great love for books; particularly comics, novels and science books but since he is in the field of business, he has shifted his focus to business and management related books. Other than that; just like every Indian, he too is, a diehard movie buff and often used to go out with his children – Aalok and Vidhi when they were young!

Aalok Shanghvi, who is at the age of 30-years now, has graduated in molecular biology from the University of Michigan and is married to Karishma Mehta – granddaughter of C.K. Mehta, the founder of Vadodara-based Deepak Fertilizers and Petrochemicals Corp.

Professionally; although he is a part of Sun Pharmaceuticals but just like his father, he too started his career ground up. Beginning as a product manager in 2007, Aalok has gradually climbed the ladders to become the senior general manager in the group’s international marketing unit. Other than that; coming from an innovative bloodline he along with his friend Jimmy Desai have also set up solar panel maker PV Powertech Pvt. Ltd.

Trivia: – As a promoter of sun pharmaceutical, whatever dividend Dilip earns on his shares goes into educational and health expenses for financially challenged children.

During his whole journey; Dilip has religiously followed the Mantra that – “never begin to dig a well when there is fire.” According to him, you obviously cannot predict when there will be a situation of crisis, but it is always advisable to anticipate the same and be prepared to survive the tide when it strikes.

Ideologies like such, has brought Sun Pharmaceuticals to the fifth place in the global generic drugs market!

Sun Pharmaceutical Industries Limited; listed on National Stock Exchange (NSE) & Bombay Stock Exchange (BSE) with roughly more than 14,000 employees – is India’s largest multinational pharmaceutical company and has headquarters located in the financial capital of India – Mumbai. Sun Pharma proudly masters in the manufacture of pharmaceutical formulations and active pharmaceutical ingredients (APIs) with its highest sales being primarily in India and the United States.

The board of Sun Pharmaceutical includes Israel Makov who is presently the Chairman followed by Dilip Shanghvi himself as the Managing Director along with Sudhir V. Valia and Sailesh T. Desai as Executive Directors; out of the many. Some of the areas in which they offer formulations include cardiology, psychiatry, neurology, gastroenterology, diabetology, etc. Along with that; it also provides a number of APIs such as warfarin, carbamazepine, etodolac, anticancers, steroids, sex hormones, controlled substances and many more!

Sun Pharma markets these and many like such drugs through a number of subsidiaries which includes Aztec, Inca, Sun, Milmet, Synergy, TDPL, Symbiosis, and Solares.

Due to its latest acquisition of Ranbaxy; Sun Pharma has become the largest pharmaceutical company in India, the largest Indian Pharma company in the US, and the 5th largest speciality generic company globally.

72% of the company’s business comes from markets outside India, primarily from the US which accounts to about 60% of its turnover. It holds manufacturing plants across more than 20 locations which includes the US, Canada, Brazil, Mexico and Israel.

Trivia: – In 2007, Sun Pharma demerged its innovative R&D wing and listed it independently on the stock market as “Sun Pharma advanced research company ltd” or ‘Sparc’. in 2013, it declared revenues worth INR873 million.}

During their journey; Sun Pharmaceutical has made more than many mergers or acquisitions and has successfully turned them around for their benefits! Apart from the many, below mentioned are some the most notable deals cracked by them: –

Just like his mantra goes; Dilip bhai since his early life had understood that making blind moves must never an option. Even though business itself is a gamble and means taking risks but the risks should be well calculated ones, so that one wrong or hasty decision doesn’t harm the company.

Having said that, when he began his entrepreneurial journey he ended up taking the biggest risk of his life!

More than risk, the steps taken by him were unconventional, innovative and well calculated decisions that have successfully drawn the path to success for him and the company. To begin with; he carried on his father’s legacy and started off as a mere wholesaler of pharmaceutical products in Kolkata. During this phase; he developed the thought of making his own drugs instead of selling others products.

Hence, soon he decided to go against the wind and with just two marketing executives began manufacturing & selling lifestyle and psychiatry drugs – which only a handful of MNC’s used to make in 1982. It certainly did wipe out the competition but as obvious, the road ahead did not turn out to be easy.

And as far as the name was concerned, as Dilip bhai narrates – “I had no doubts in my mind whatsoever that this would be the name of my company, because ‘Sun’ is the unlimited source of ultimate, endless energy.”

Now the whole idea behind manufacturing these drugs was only to show their presence in a market where not many doctors knew or even prescribed these medicines. Tackling such situations, in the first year itself they did a business of about INR 7 lakhs.

With the pinch of success he had tasted, inspired him to have his own factory! Shashikant Sanghvi came to his rescue; he was the same person from where he used to get his products manufactured till now. Shashikant loaned him some money and helped him setup his own factory at Vapi!

By 90s, Sun Pharma had begun to make its presence felt! And in 1993, the visionary re-invested its entire profit of INR 4 crores in setting up his own research centre and to add to that within a year itself the company joined the capital market with a public issue. During that time, the company had a turnover of around INR 50 – 60 Crores.

By then; the company had smartly expanded from just psychiatry drugs to medicines for heart, respiratory complications, diabetes, stomach and intestines, etc. too! The reason they picked these diseases was because these generally struck people at an advanced age and their treatment used to continue for a long duration.

Dilip bhai – the shrewd businessman had an ideology to retain his customers: “Man’s body is just like a car.” Just like a car; with age, man too needs more attention & repairing and similarly its treatment too is likely to continue for a long time. Hence, he preferred to focus on those drugs that people have to continue taking for a longer duration.

To add to that; evidently Dilip bhai coming from a commerce background did not have much knowledge about the Pharma industry; but to cover that he retained people who were experts in this field. Having said that; he prefers to give opportunities to his own staff members instead of job poaching! Primarily, because getting-in someone knowledgeable from outside, would be of no value once you take away his expertise but if you give the same opportunity to your own people to develop their capacity, you will build a loyal & reliable team.

Trivia: – “Everyone in the senior team speaks in Gujarati and most meetings are usually informal which are held around Shanghvi’s table.”

The awards and recognition that Dilip bhai & Sun Pharma have received and achieved go beyond the reach of numbers. Below mentioned are some of their most notable ones: –

His perseverance on staying ahead of his rivals has taken him very high in his life. Due to his firm and highly accurate instincts; Mr. Dilip Shanghvi has crossed those roads which even established big companies were reluctant to tread.

Lastly, due to visionaries like Dilip bhai and companies likes his; the Indian pharmaceutical industry has become the 3rd largest producer in the world, in terms of volumes and is on the verge of becoming a 20 billion industry in the near future.