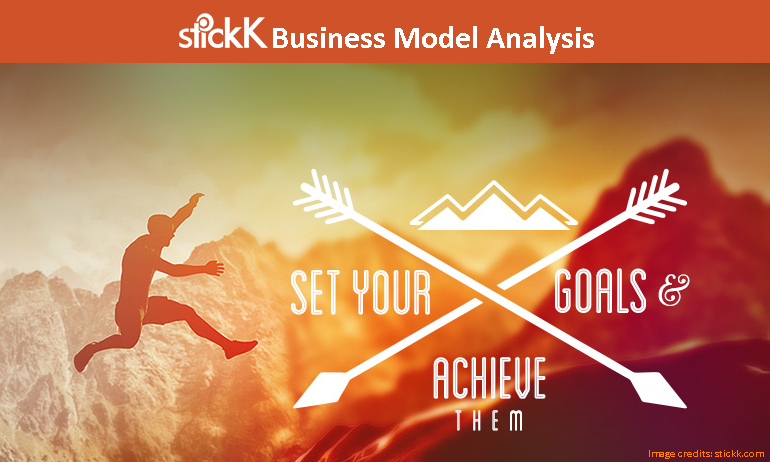 Founded in 2007 – stickK.com, which is based on the principles of behavioural economics, is in simple terms, a free goal-setting platform!

Basically, the idea basically is to set a goal / resolution that you are finding difficult to achieve, and then choose the appropriate reward for success or punishment for failure!

In other words – putting your money where your mouth is!

Using their goal-setting framework to create Commitment Contracts, one can successfully achieve their resolutions and goals. Be it – leaving smoking / drinking, reducing / gaining weight, reaching on time, or for that matter any other goal; stickK can help you achieve it!

The difference between other goal-setting platforms and stickK is that, stickK functions on a methodology that is specifically structured to help people by leveraging the power of incentives and accountability in changing their behaviour.

And, stickK also allows users to create a custom plan-of-action of how to turn their goal into a reality.

Other than these – stickK also works with Schools, Gyms, Doctors / Dentists, Governments and Municipalities, Banks and Financial Advisors, etc…to help and motivate their individual users to achieve the required targets or goals!

TRIVIA: The Company’s name comes from ‘sticking to it, and the second ‘K’ is the legal shorthand for a contract.  It also refers to carrot and stick.

How does stickK work?

stickK works in ways where it provides you with the necessary tools to fight back against human nature.

After you define the goal, you have to choose a Timeline to accomplish the given goal, post which, you need to put something up for Stake! As part of your Commitment Contract, people are encouraged to put money on stake, to help them motivate further in achieving their goal.

Next, you need to assign a Referee! This is ideally a trusted friend or a family member, who would be verifying and monitoring the progress report. When a user submits a report to the website, the referee is asked to confirm the accuracy of the report.

Lastly, you can also invite your friends to follow your Commitment and progress, and cheer you along as Supporters. They would receive weekly updates about your progress.

And what if the contract is broken?

Well, there you face the punishment you have chosen. Yes, you literally face that punishment!

So for instance, if you have opted to give away money, then your money will be transferred to the chosen parties / organizations / charities.

To up the ante, you can also pick a specific organization whose views you oppose (within reason and legitimacy, of course!) for the money to be transferred to. Also referred to as “anti-charities” at stickK! StickK has a list of 23 anti-charities to choose from. These are organizations on either side of several highly controversial issues.

The purpose of an anti-charity is to provide an added motivation for you to achieve your goal, and since, it is something you dislike, you will work even harder to ensure that the money doesn’t fall into wrong hands.

And to top it all – all of that is mentioned on a “Commitment Contract” which is a legally binding agreement of the aforementioned. So you can’t escape it too!

Why does the idea of stickK work?

The reason this idea works, is simply because, it plays with the mind of the user!

The trick here is that, Behavioural Science has discovered that there are two most effective factors that help people in achieving their targets: Incentives and Accountability!

Financial Incentives and Accountability, often gets people to do stuff.

So instead of prohibiting the behaviour, it allows the users to continue their behaviour if they want to—but also sets up consequences for the same.

Behavioural Science tells us that humans are loss-averse, and are social animals that make decisions in a time-inconsistent manner, which means that, we don’t like losing things and most often give in to immediate / present satisfaction,  (e.g. smoking) at the expense of our long term goals (e.g. health).

Studies on behavioural economics have proved that, people who put their money (or something else) on stake, are most like to achieve a goal, also because a legal contract is involved!

And it makes sense too!

Think of it, we all begin with a task / goal with hopes to go all the way achieving the same, but most of the time and most of us, don’t even reach half way. This is because we lack motivation and fear!

A Commitment Contract, gives us the needed motivation and fear, and makes backing out a whole lot harder.

That’s why stickK works so well—stickK offers the most appropriate incentives and accountability; thus, increasing the e chances at success by up to three-folds.

stickK was founded by Dean Karlan and Ian Ayres in 2007!

It is currently lead by CEO – Jordan Goldberg. He has completed his studies from the Yale University, and also holds a Management degree from the Yale University – Yale School of Management, as well. Soon after he completed his studies in 2006, he was picked up by his professors Dean and Ian to take charge as the CEO of stickK!

Talk about the founders…

He had begun his career as an Investment Banking Analyst for the Bank of America (then Nationsbank) in September 1990.

After working with them for about 2 years, he then moved on to work with FINCA International as a Systems Consultant in September 1992.

This stint continued for around 2.5 years, post which he joined the prestigious Princeton University July 2002 as an Assistant Professor and went on to work with them for about 3 years.

Finally in 2005, Dean moved on to work with Yale University as the Professor of Economics, and today, even after 11 years, he still continues to work with them as well.

While at it, in 2007, Dean along with Ian founded stickK.com!

Over the period of time, he has also got associated with various institutions such as: President at the Innovations for Poverty Action, Member of Grameen Foundation Technology Center Advisory Board, Non-Resident Fellow at the Center for Global Development, and many more…

Ian is an American lawyer, Economist, and is a professor at the Yale Law School and at the Yale School of Management.

Ian had graduated from the Yale University with a dual degree in Russian studies and Economics in 1981, post which he also went on to achieve his J.D. at Yale Law School in 1986. Ian also holds a Ph.D. in Economics from the Massachusetts Institute of Technology in 1988.

Over the period of time, Ian has managed to attain a position as one of the 250 most prolific and most-referred legal scholars of his generation, and has also managed to publish more than 8 books and over 100 articles in law reviews and magazines on a variety of subjects.

Since 1994, Ayres has served as a professor at the Yale Law School and the Yale School of Management, where he teaches commercial law, corporations, corporate finance, civil rights, antitrust, contracts, law and economics, property, quantitative methods, etc…

And finally in 2007, Ian along with Dena also cofounded StickK.

In 2002, two tubby graduate economics students Dean Karlan & John Romalis, from the Massachusetts Institute of Technology wanted to lose some weight and managed to achieve the targets, by putting a wager.

So the stakes were – Dean would pay $10,000 to John Romalis if he wasn’t able to lose 17kgs by an agreed date, and vice versa. And if both failed then, the one who failed by least would get $5,000 from the other.

The deal sounded fair to both, and they happily shelled out the money. Later, this initial deal was replaced by a “Maintenance Contract” wherein, either of them could show up unannounced to check the weight of the other and collect $5,000 for each pound over an agreed weight.

Who won? Not Important!

What’s important was that, that day Dean learned something that helped him greatly in the future!

This is the logic that gave them the idea of stickK.com, post which, in 2007, Dean along with Ian founded stickK.com in New Haven!

Initially, they had invested their own capital of $150,000 into the company. They also recruited Jordan Goldberg (then a student at the Yale School of Management), to run the company as the CEO, and subsequently, also moved the company to New York City as well. The web site was launched in the beginning of 2008.

According to Jordan, there was a high chance of users who put money on the line to achieve their goals, as compared to the rest of the 35% who didn’t put any money.

In May 2010, stickK.com also launched Choose You, where individuals could write commitment contracts and have their friends or family pledge money to the American Cancer Society if the contract is fulfilled. This was done on a charitable note to help those in need!

In the same year, stickK also launched their first-ever private label version of their public platform, for the organizations and corporations to encourage behaviour change with their employees.

stickK, as a brand has also been written about and quoted several times in many articles and books such as: by Steven Levitt, appearance in the book “More Than Good Intentions”, etc…