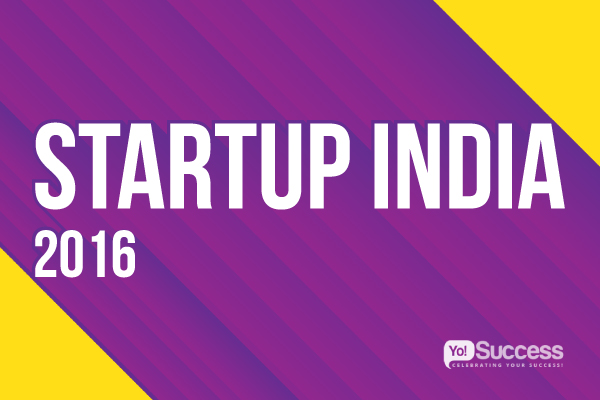 To begin with – the Chinese economy, which has been a driver of the global growth, has been rapidly slowing down, leading to a global setback. IMF (International Monetary Fund) has quoted China’s growth projection at 6.3% in 2016.

On the other hand, IMF has projected India to grow at 7.3%, and is projected to remain the fastest growing major economy in 2016. It is widely said that the 21st century belongs to India, and that India can be bigger in momentum than China in next 10 years.

And to boost this further, PM Narendra Modi has kick-started Start-up India!

Start-up India campaign is an action plan initiated to help start-ups with most of their requirements to boost entrepreneurship and encourage start-up ventures. Start-up India was not just a campaign to help with Investments, but was aimed at the overall development, upliftment and smoothening of the start-up ecosystem.

The campaign was organized by the Department of Industrial Policy and Promotion (DIPP), and was launched on the 16th of January 2016, by Arun Jaitley – Union Minister of Finance and Corporate Affairs at Vigyan Bhavan in New Delhi. Nirmala Sitharaman – Minister of State for Commerce and Industry, was the Guest of Honour.

It was first announced by Prime Minister Narendra Modi during his speech on the 15th of August at Red Fort, and has now been put to action.

DIPP have partnered with Invest India and Start-up ecosystem players like – iSpirt, YourStory, NASSCOM, SheThePeople.tv and Kairos Society and youth wings of FICCI and CII.

The event was an all-day global workshop on Start-up Entrepreneurship and also included panel discussions on topics such as: -

The panels also included representation from Securities Exchange Board of India (SEBI) and Small Industries Development Bank of India (SIDBI) as well.

There was also a unique (Q&A) session titled “Face-to-face with Policy-makers”, wherein Secretaries of Key Government Ministries and Departments answered various questions on how Government will be creating a conducive environment for Start-ups.

A virtual exhibition was also organized at the event, to showcase the unique and innovative work done by Start-ups in the country.

Other than that, the Start-up India Campaign was also seen promoting the ‘Stand-up India Initiative’, which again was aimed at promoting entrepreneurship, but amongst the SC /ST / OBC, Women, and all other Communities.

It has often pointed out that the quality of education in Indian institutions have not been found up to the mark and do not match with the organization’s standards for the required skill-set, and eventually the companies are forced to spend more on training the freshers. Hence, to solve this issue, the country has also launched the ‘Skill India Campaign’ as well!

The event was telecasted live at all the IITs, IIMs, NITs, IIITs, all other Central Universities and to all the youth groups in over 350 districts of India.

What is the purpose of Start-up India?

The objective of Start-up India was to regain the confidence of the start-ups and to show that the government was committed to the well-being of the start-up ecosystem.

As rightly pointed out by our Prime Minister, the most successful start-ups are usually the ones those aim to solve a real-life problem. It is a well established fact that, one of the major reasons for the rise of the IT sector was due to minimum Government Regulations or less involvement of the Government in general.

And, the GOI is trying to implement the same mindset by launching the Start-up India Campaign as well. Our present government wishes to assure minimum interference from the government, and to play the role of a “facilitator” for start-ups.

This campaign is aimed on to restricting the role of the States in policy domain, along with complete removal of “license raj” and all other hindrances that are faced while performing a business like in land permissions, foreign investment proposal, environmental clearances, etc…

The launch of this event is focused at celebrating the entrepreneurial spirit of India’s youth, and wishes to turn the youth of India from job-seekers to job-creators.

What are the KEY takeaways from the event? How will it benefit the start-up Ecosystem?

The campaign was attended by CEOs and founders of more than 1500 top Start-ups from across the country and abroad.

Among the attendees, there were over 40 CEOs, Start-up founders and Investors from Silicon Valley as special guests who also took part in the interactive Q&A sessions. These included Masayoshi Son – CEO of SoftBank, Kunal Bahl – Founder of Snaa, Travis Kalanick – Founder of Uber, Adam Nuemann – CEO of WeWork, Sachin Bansal – Founder of Flipkart, etc…

The much-awaited Start-up India has brought a lot of positivity in the start-up environment in India, and comes as a fresh ray of hope in these harsh working conditions. This action is said to boost up the lost confidence from within the entrepreneurs to start-up through a hassle free process.

Additionally, under this scheme, a set of start-ups will also acknowledge an MOU (Memorandum of Understanding) with these institutions and will also establish start-up centers in the campus.

Overall – below mentioned are most of the KEY initiatives that have been taken at the campaign: -

Who would be ELIGIBLE for the schemes launched at the event?

Many entrepreneurs have been very excited by the announcements made at the event, but then again, not all start-ups qualify.

Here’s a quick analysis of the eligibility criteria: -

**DIPP has the power to publish a ‘NEGATIVE’ list of funds which are not eligible for this initiative.

What were / are the INITIATIVES taken by individual States?

In sync with the Start-up India Action Plan – the government has already launched PMMY (Pradhan Mantri Mudra Yojana), the MUDRA Bank. It is an institution that has been setup for development and refinancing activities of micro units with a Refinance Fund of Rs. 200 billion.

Additionally, with Prime Minister’s Start-up India initiative, Devendra Fadnavis (Chief Minister of Maharashtra) has also assured small business men and venture investors, that some new and necessary steps shall be taken soon, to make us the capital for start-ups.

But overall, majorly Southern States of the nation like Karnataka, Kerala, Andhra Pradesh and Telangana, have also shown far greater performance than the rest. In terms of their policies implementations in support of start-ups, these states have shown better results than the rest of the country. They have been focusing on improvising the infrastructure, mainly of the Tier-II cities.

Bangalore has become to be known as the Silicon Valley of India, while Kerala has built its name for its start-up policy called – “Kerala IT Mission“. This mission is focusing on getting Rs. 50 billion in investments for the State’s start-up ecosystem.

Telangana has also launched the largest incubation center in India called “T-Hub“, while Andhra Pradesh has allocated a 17000-sqft Technological Research and Innovation Park, as a Research and Development laboratory. They have also launched a fund for entrepreneurs of Rs. 100 crores called “Initial Innovation Fund“.

Lastly, Madhya Pradesh has collaborated with the Small Industries Development Bank of India (SIDBI) to create a fund of Rs. 200 crores, while Rajasthan has launched a “Start-up Oasis” scheme for all the aspirers.