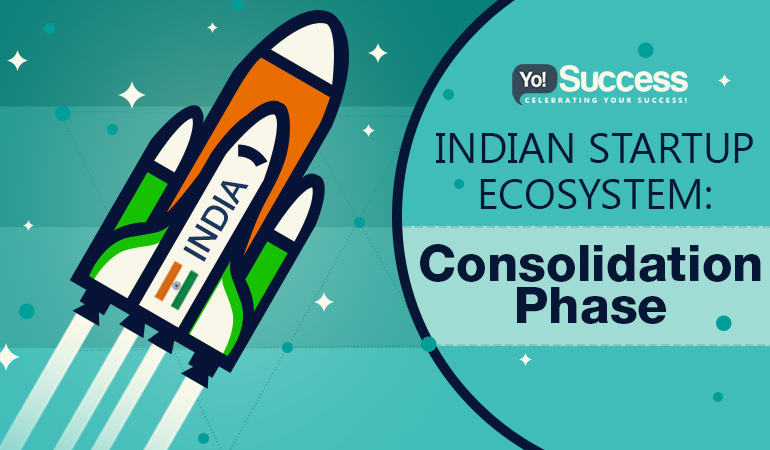 In the last decade, the Indian start-up ecosystem has taken off massively, which has greatly been driven by factors such as massive funding, consolidation activities, evolving technology and a promising domestic market.

Today, when we look at ourselves on the global chart, India has indeed come a long way and has recently overtaken Israel to become the third in global start-up ecosystems, just after the US and the UK. It is also being anticipated that, soon it would outbeat either of the former two, to become the second as well.

To add to that – with more than 4200 start-ups and a growth rate of 40%, India is also amongst the top five largest start-up communities in the world.

But then again, stating all these things don’t mean everything is fine! Let’s begin by showing you the current start-up market scenario.

What is the current Start-up market scenario?

Till sometime back, all that we heard was news about how investors were pouring millions into raw and half-baked businesses at sky-touching valuations.

But surprisingly, unlike the hype, the Indian start-up market saw only four tech IPO’s so far. Other than Infibeam, JustDial, MakeMyTrip and Info Edge, none of the companies managed to reach anywhere near profits, or showed any signs of returns on the investment taken!

A whole lot of investors who had happily written big fat cheques in the beginning days, in fear of missing the Indian start-up boom bus, were now caught in a tight spot! That is when they decided to change the course of the tide.

Even when an IPO may be a rare case scenario in India, the investors have successfully managed to change the headlines. All that we are hearing now is – “Indian start-up ecosystem has entered the consolidation phase”!

If you look at the stats of 2015, it’s been raining acquisitions. According to the data available with Venture Intelligence, the year of 2015 saw around 139 acquisitions in the start-up space, which was more than double and four-times of what happened in 2014 and 2013, respectively.

The bigger and stronger fishes have begun to eat the smaller and the weaker fishes in the ocean!

What’s more significant to note is that they’re happening within the country, by well-funded Indian start-ups. Interestingly, these acquisitions are not happening in a particular sector or industry, but are happening all around.

Market observers say that, while some of these were made in desperation, and in attempts to form forces against bigger rivals, the others were forced to get acquired by the investors themselves. Either ways, the year of 2015 has kept the pot boiling!

Here are 11 of the most notable acquisitions that took place in India last year: -

Now other than these – the other kind of consolidation that has been greatly observed in the start-up market is of Operations.

Since, VC’s have now become very strict on shelling out money, many or rather most of the start-ups in India, after building up their market shares and brand value, have begun to consolidate their Operations as well. In other words, they have been asked to, in underlined messages of course, focus on the operations and revenues.

Shockingly, industry experts believe that, a company can save as much as 25% of their operational costs just by consolidating their office spaces, and shifting to the suburbs.

Following the trend and the mounting pressure, many start-ups have begun shifting from multiple lavish offices in A-grade areas to single offices in B-grade areas.

So the next most obvious question that arises is…

Why is the Consolidation happening?

To answer this question, we must first travel back in time.

The year was 2000! A start-up market in the US, similar to that of the one present in India, was booming like never before.

The speculators and investors, seeing a great opportunity, keeping in mind – the fast increase in value of companies, undervalued shares, and future anticipated rises, had invested heavily in these technology start-ups.

But at the same time, a bubble had started to take shape as well.

And just when the market’s self-regulating mechanisms took place, the bubble could not sustain itself for long and in 2000 – the DotCom bubble busted!

From the time of the event, in about a month’s time, NASDAQ index (second-largest stock exchange in the world) had fallen thousands of units down. It was a brutal market crash.

Cut to – the preset!

Fifteen years later, the Indian start-up market is going through a similar phase of boom, causing a bubble to begin taking shape again, which is making the VC’s rethink in fear, if the same thing is happening or not?

A debate has been mushrooming since a while on whether the situation is the same or not, since both the times have a lot of resemblance too.

However, one must not blindly fear by looking at one side of the situation!

There are enough positive signals to effectively point out that these fears about the bubble are a fiction of their imagination.

All these high-priced private investment rounds that have been taking place in India are by foreign funds with deep pockets and high risk appetites. These are the ones, who have had first-hand experience with the earlier crash, are well aware of its how’s and what’s, and how to avert such a situation.

As a matter of fact, the start-ups in India are seen to be maturing, and the best way to understand that is the Consolidation that is taking place all over!

Any sector that has too many players with less or no profits, a consolidation phase is bound to come!

Evidently, most of the start-ups in India haven’t made any money as of yet. And since there are no entry barriers, the start-up market is flooding with companies, causing stampedes.

In such cases, the ones that are affected the most are the smaller players who find it extremely hard to survive and are forced to look for options. In many cases, you’d find investors forcing a merger or acquisition.

Observers of start-up ecosystems consider Exits as a sign of maturity!

Simply because – exits in any form (M&A or IPO) give VCs a return on their investment, thus, completing the cycle of venture capital. Post which, they are able to launch new funds to invest in fresh start-ups!

And the recent trend also suggests that the market is already begun the process of correcting itself. These mergers and acquisitions are nothing but course-correction initiated by the investors.

All these are nothing but clear signs that the fund houses do not want to repeat their mistakes again, and are already taking steps to avoid any fallout.

They now have three options: let a venture die and cut their losses, infuse more money and pray that it is able to match the leader, or the third option – become a part of the leader!

And clearly, investors feel becoming a part of the leader is the best bet they have, to recover their investment.

What does the future hold for the Start-up Ecosystem in India?

To begin with – what we can be most sure about is that our future certainly looks bright!

In the foreseeable future, the realities are definitely going to change for India’s start-up scene! Many believe that ‘Consolidation’ and ‘Customer Experience’ are going to be the most focused aspects, and more big scale consolidation can also be expected in 2016 as well.

In fact, if you notice – the focus has already moved to more impact areas such as: personalisation, recommendation, last mile delivery, returns and refunds.

The ones with strong and intensive planning and execution strategy will survive and lead the game, while the others would eventually wrap up and consolidate. These would be moves using which the start-up ecosystem would strengthen itself and build a stronger foundation for growth.

Since, start-ups have been playing around with VCs for a while, with their unrealistic and over-exaggerated valuations to raise funds, more and more start-ups across all sectors would now go through down rounds (reduced valuation) or flat valuations (the same valuation as the last round), as a step towards correction.

Many VCs would also be taking a back seat in large funding rounds in their existing portfolio companies, unless they see something concrete. There would be a huge pressure on cutting costs and focusing on profits as well.

The most positive outcome that will happen is that, start-ups will now begin to focus on things that should be more important, rather than raising funds. The companies that were running on discounting and offers (while burning cash) to adopt consumers so far, would now be forced to think on different monetisation and revenue models to help them gain financial independence.

Learning from this – the newer set of start-ups that would arise would be more evolved and experienced as well.

The good news is that – there will be a lot more seed or early stage investing that will also be happening throughout the year.

While 2015 went to new technologies like digital payments, Internet of Things (IoT) and smart data storage, this year of 2016 would also include a strong focus on other technologies in Renewable Energy, Advanced Robotics and Autonomous Vehicles, as well.

Other than that – to give you an over view of the start-up ecosystem for the year of 2016: -

Lastly, the government is also seen to be formulating their own policy to support start-ups, and one can expect a lot of changes as well. They had also asked Nasscom to submit a 10-point recommendation, in relation to the major pain-points faced by the start-up ecosystem.

So the ecosystem can definitely expect some positive developments on the lines of: Taxation, simpler and easier ways for starting / operating / closing the company, access to risk capital and debt funding from Indian companies, online transactions, more domestic incubation facilities, support and training on market access and in areas where they require supplementation, IPR regime, etc…