SoftBank bets on the future of Internet Of Things, and acquires ARM Holdings for 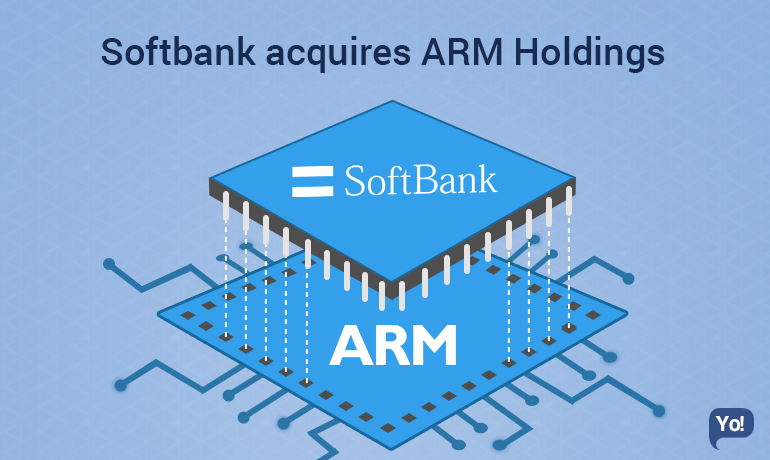 Japan-based SoftBank Group (SBG) and UK-based ARM Holdings has entered into an agreement wherein Softbank would be acquiring ARM for a whooping $31 Billion (£24 Billion) in an all cash transaction. This is a price that is more than 70 times of ARM’s net earnings in 2015.

Softbank Group is a telecommunications and Internet Corporation that holds a diversified portfolio of Broadband, Fixed-line Telecommunications, eCommerce, Internet, Technology Services, Finance, Media and Marketing, Semiconductor Design, and other businesses.

ARM Holdings is the semiconductor and software design firm that is in the design of ARM processors (CPUs) business and whose microchips are used in many technologies including: Televisions, Smartphones and tablets, Drones, Smart home, Smart cities, Smart cars, Wearable tech, etc., and has clients like Apple and Samsung, and collecting royalties on each chip made. ARM is considered to be market dominant (with 95% market share) in the field of processors for mobile phones (smartphones or otherwise) and tablet computers.

TRIVIA: SoftBank already had ties with ARM through its earlier acquisition of Sprint (the American wireless carrier company), and had spoken with ARM’s Chairman about two weeks before the finalization, regarding a possible takeover.

By owning it, SoftBank has become one of the most important and impactful tech companies in the world. Masayoshi Son (Chairman, SoftBank), a man that has been widely known to make smart investments which have given back huge returns, including investing $20 Mn in Alibaba in 2000 that is worth $65 Bn today, acquisition of Vodafone’s Japanese arm for $15 Bn, acquisition of Sprint (4th largest telecom in the US), etc.; is still calling the ARM acquisition to be his company’s most important one yet.

Masayoshi Son believes that this is one of the most important acquisitions for the company and ARM would act as the perfect catalyst for SoftBank’s growth strategy going forward.

Going ahead, SoftBank intends to invest in ARM, support their management team, accelerate their strategy and give them a free hand to allow the company to invest heavily in Internet of Things. Softbank has also promised to double ARM’s 1600 employees over the next five years, as well.

This acquisition will be the third-largest proposed corporate merger of 2016, and the second-largest chip deal (after Avago Technologies’ $37 billion deal for Broadcom), on record.

SoftBank is financing the deal with a £7.3 Bn loan and £16.7 Bn in cash from their reserves that they have raised from the recent sales of stakes in Alibaba and Supercell.

The deal has already been approved by SBG’s Board of Directors, and is awaiting approval from ARM’s shareholders and of the English court.

The acquisition is expected to be completed by the third quarter of 2016 (period ending on 30th September 2016), post which, ARM will become a wholly-owned subsidiary of Softbank, but would continue to function as an independent business.

This is the largest ever acquisition deal in Europe from an Asian country ever!

There are many speculations going around the expert and media circles, that the deal took place right after Britain left EU, and that it had been a result of the pound’s fall after the EU referendum making it cheaper for foreign buyers to acquire UK companies.

Here’s a food for thought…

Even though, the deal came just weeks after the referendum, but ARM’s customer base is global and was always protected from Brexit.

Additionally, if this would be a ruthless takeover, why would Softbank want to preserve the ARM’s organization including existing senior management team, brand and culture, keep the company independent, and pledge to double the employee headcount?

And most importantly –– since ARM books its sales in Dollars, the falling pound had further boosted the company’s share price since the vote, making it further more expensive for SoftBank. In fact, the company had had to raise its offer price three times to secure a deal.

Why did SoftBank acquire ARM?

Softbank currently holds a massive debt of more than $100 Bn, which mainly has occurred to finance many of company’s acquisitions.

So why would a company that holds such huge debts, go for such an enormous acquisition? What does this acquisition signify for SoftBank?

To begin with – now there are two ways to look at this acquisition: As a telecom player, it wouldn’t make much sense; they would rather buy a hardware maker. But if you look at it from an investment firm’s perspective, there cannot be a better deal.

If you see closely, the smartphone wave has peaked and the Internet of Things (IoT) category is already becoming mainstream. Softbank are looking at the next wave of devices!

In the last some time, as technology firms look to get ahead in IoT, a lot of acquisition activity in the semiconductor space has seen to be taking place. Take for instance – last year, Qualcomm bought CSR for $2.4 Bn, and Intel had acquired Altera for $16.7 Bn.

Imagine — your fridge, your washing machine, even your hairbrush, is being controlled by your computer, and everyday appliances are now transformed into intelligent, thinking and analytical machines.

Now think – how much would you end up paying to own the technology behind those devices?

Yeah!!! That’s where ARM comes in.

That’s exactly the vision of Masayoshi Son, who is now betting on the future!

Masayoshi Son is widely known to have an eye for potentially transformative industries and trends, and accounts for several such successful investments, and according to him this deal is really about the investment horizon, and an attempt to become the market leader of Internet of Things.

And ARM Holdings’ chip designs, apart from being used in smartphones are also used in IoT devices such as wearables, trackers, devices for smart city implementations and so on.

In fact, the Processor giant (ARM) is developing its own Operating System for the Internet of Things (IoT), called mbed, which aims to make it easier for companies entering the space to pick up an ARM-based chip and quickly set up a working connected device.

Masayoshi Son had been following ARM for the last 10 years, but only decided to invest in a firm that provides the technology in nearly all smartphones, when the market and company was ready!

IoT is going to be the biggest paradigm shift in human history and ARM will be the center of the Internet of Things, in which everything will be connected.

And with ARM’s designs being used in this larger addressable market; investing in a company that stands to have a much bigger install base, does in fact, makes perfect sense for SoftBank from an investment perspective.

This might help to explain why Softbank is paying close to a 50% premium for ARM Holdings!