Snapdeal re-branding just before the start of the festival season! Is it a despe 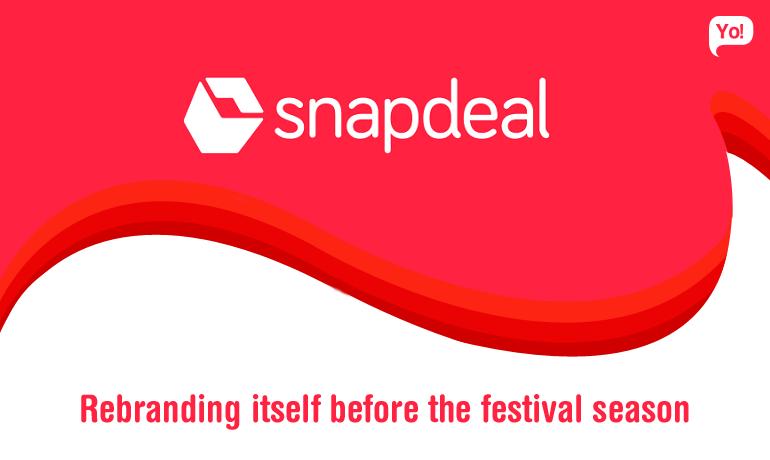 Snapdeal has recently adopted a major look and identity makeover that is being reported to be their biggest repositioning since pivoting from a deals site six years ago.

They have rebranded themselves with a new logo and a campaign named Unbox Zindagi.  They have thrown their red-and-blue logo away, and has moved on to a vermello-coloured (a shade of red) box.

Snapdeal’s delivery boxes will now also be in Vermello, and all the shipments from their fulfilment centres and most of those from sellers will also be delivered in red boxes. Their delivery boys will also be wearing red shirts too.

The new brand identity has been rolled out on the app, website, and mobile site, and is being marketed across television, print, YouTube and social media.

To begin with – according to a report submitted by Kotak Institutional equities, Indian eTailing market is expected to potentially touch around $28 Billion by 2019-20, with a registered CAGR (Compounded Annual Growth Rate) of 45% over the next four years. The number of online buyers is also anticipated to grow to 110 million as well.

According to Snapdeal, they have invested more than ₹200 crores in this rebranding move. They have also got on board big names like Prasoon Joshi and his team at Mcann, along with the musical trio Shankar Ehsaan Loy, who have put together a campaign that is aimed at building an emotional connect with the customer base.

These changes that have been brought about, have been done keeping in mind their repositioning strategy (of being more consumer-centric), and expansion of reach. Additionally, in sync with their positioning, they are also looking to upgrade their customer care services as well.

This rebranding surprisingly also comes just ahead of the big shopping season, to gear up for competing with fellow eCommerce giants. This is also a crucial point for Snapdeal, given that the company has slipped their position against its primary competitors – Amazon and Flipkart, to become the third largest company.

The key members of the leadership team of Snapdeal had travelled across the country around the beginning of the year and had met existing and prospective users from several cities like Mumbai, Delhi, Kolkata, Chennai, Guwahati, Bhopal, Rajkot, Nagpur, and Madurai.

Using the insights drawn from these interactions, the new positioning and identity was created.

Although, a lot more months had gone into the preparation of every single aspect including: design, feel, look, advertising etc., that were all perfectly timed for Diwali, but their backend processes took just three months, to go live.

Snapdeal is basically focusing their overall strategy on the next phase of growth, and is seeking to get acquainted with the set of 100 million Indian online shoppers that will be coming on board.

Beyond all that – this is also a desperate attempt by Snapdeal and its founder Kunal Bahl to avoid a possible forced merger. It is being predicted by many that if the company is not able to get back on track soon, then it would be forced to merge with either of its rivals.

However, several experts strongly feel that Kunal’s plans are really ambitious and he can still bring his company back on the track.

Having said that – their fundamental goals remain unchanged and this is just the beginning to a very long journey!

From the perspective of Focus ––

The new positioning is specifically focussed on the aspirational India. For such an aspirational consumer base, the products they purchase is what marks the difference between yesterday, today and tomorrow.

As expressed in their new brand identity as well – it is about understanding that each purchase is not just a transaction, but an opportunity to upgrade to a better life!

If you notice, progress is marked by buying an air conditioner or computer at home for a normal Indian middle class, and these new boxes that Snapdeal has started to deliver portray are milestones of such progress.

Since their initiation in 2010 when the company started off as a coupons site, to pivoting to a marketplace in late 2011, and finally, the adoption of the new brand identity that they have adopted now, Snapdeal has indeed come a long way. They have reached a certain stage and size now, wherein they’re educating people to buy online.

Now, since the industry has about 50 million users, they feel that, it is now time to build the brand, and about finding what would be more appealing and relevant to the customers.

To sum it up – their focus is clearly on delivering a superior delivery experience to the eCommerce consumers who have complained for long about the quality of service provided by the country’s eCommerce majors, and turning the spotlight  to the gaps to the supply chain and logistics operations.

And from competition’s perspective ––

The market is in a maturing phase. The next stage of adoption is with a very different set of consumers. And as they have slipped down to the third position, the rebranding is very much needed to boost their on-going race against Amazon and Flipkart.

However, the overall online retail market accounts for hardly 2% of the total retail in India. So, it is not just the online players that Snapdeal will be competing with; but in fact, they will also be holding direct competition with all the retailers as well. Due to which, it is of utmost importance for them to create a presence in the minds of the offline masses too.

Hence, they have realised that in order to survive in this cut-throat environment, Snapdeal will have to revamp themselves!

How competitive is the eCommerce market going to be in this festival Season?

The eCommerce discount wars for the festive season of 2016 is about to begin.

eCommerce sector in India has already become a battleground and all the big players are devising new ways and strategies to attract and retain the most number of users.

The last quarter of each calendar year is said to be extremely crucial for mostly all the marketers in India but for the eCommerce companies, this festive season of 2016 is said to be critical as it could change the course of the industry, and their position in it, for good.

This is probably going to be the most important season in the existence of eCommerce companies in India so far, as this festive season will determine the leaders and the followers!!

This has led to an increase in the importance of sellers on these platforms as well. Subsequently, the companies have also seen to be been making efforts to attract sellers to their respective platforms.

To make things more stringent, the government has recently implemented new rules for FDI, under which, no company can get more than 25% of sales from a single seller and nor can they affect the prices directly.

To add to that – In the past, eCommerce sales that were earlier driven by deep discounts in India, will find it extremely difficult to offer the same level of discounting, this season, given their deep losses alongside the regulation by the Indian government that bars eCommerce companies from artificially influencing prices of products sold on their platforms.

It will be interesting to see the strategy of the eCommerce companies in this festive season, particularly after the new FDI rules.

Having said that – come what may, there will indeed be a discount war this festive season! In fact, companies have already started to prepare for the same as well.

And a state of heightened activity is all too visible among Indian eCommerce companies ahead of the festive season.

Amazon has tripled its seller base from close to 40,000 last year, Flipkart is hiring 10,000 more temporary employees, and Snapdeal is offering collateral-free loans worth Rs 1,000 crore to its sellers.

The year of 2016 has especially been tough for Flipkart and Snapdeal!

The country’s largest eCommerce company saw has been seeing a series of markdowns in its valuation this year and while, Snapdeal has been in despair for quite some time now.

They not only had to shut down Exclusively.com, in just 18 months after acquiring the premium branded fashion and lifestyle products marketplace, but also has pretty much failed to sell its payments unit FreeCharge, as well. In addition to all that – they also saw a 50% drop in its sales at the end of July.

Meanwhile, Amazon seems to have built a momentum and has taken a lead over the Flipkart in terms of sales in July and August, which were a tad higher than Flipkart’s ₹2100 crore in August, as reported by Mint newspaper.

According to various industry reports – Amazon has overtaken Flipkart as the lead in the marketplace. But it all depends on which metrics you are following! If you looking at the gross merchandise volume (GMV) or overall traffic or revenues!

Other than that, Amazon also claims to have surpassed Flipkart as the most downloaded mobile app on Google and Apple stores in the first quarter of this year.

Nevertheless, Flipkart and Snapdeal already have their disadvantages which wear them down, and Amazon India seems to be in a better position at least financially.

So for Flipkart and Amazon, it’s a fight for leadership and market-share but for Snapdeal, this is another opportunity to fix the mess and get its act together, to avoid the possibilities of a forced merger.

Overall, if Amazon manages to steal the march over its rival yet again during the festive season it will seal its leadership in the market, and if Snapdeal fails to turn around its fortunes in a significant manner, it will be left with no option but to seek refuge with one of its rivals.

To add to all that – if these Indian firms (Flipkart and Snapdeal) do not grow amicably and contain their losses; there is a high possibility that there will be markdowns, which potentially, will lead to the merger of Flipkart and Snapdeal in the next 12 months!

To worsen the overall situation even more, this festive season is coming at a time when ecommerce sales, in general, have been on the steep decline in India, since the beginning of the year.

Given the heat, market pundits are expecting that Flipkart will leave no stone unturned to push sales during its Big Billion Day held around Diwali. According to several reports, it is believed that, Flipkart will be offering deals which customers have not experienced before, which will be better than any online or offline retailer in the country.

In response to that – with a $5 billion commitment by its deep-pocketed parent, Amazon is also likely to unleash an aggressive sales plan.

Meanwhile, Snapdeal, that is battling to retain the number three slot in the industry, will be using their rebranding initiative to reignite its brand recall among customers. They have also recently introduced a new service that promises free next-day delivery and other benefits to buyers who pay at the time of purchase, and have also launched their own private cloud platform named – “Snapdeal Cirrus” that will help save costs and offer performance gains across its applications.