“Necessity Is The Mother Of All Inventions!” Someone has very rightly said that the most successful businesses are created out of personal pain points. When we face a problem and we are not able to find a solution to it, in desperation we Create One!

That is exactly what this young boy – Shashank ND studying B. Tech in IT from the National Institute of Technology in Karnataka did! He went through a difficult situation in his life wherein he felt nothing but helpless, and to make sure no one else has to go through such a situation, he with the help of his friend Abhinav Lal created the ultimate solution. He Created Practo!!!

Shashank ND – A lesser known name amongst the commoners, is the founder and CEO of Practo Technologies! Personally a media shy Shashank does not prefer to reveal much about himself, but is certainly a true legend in the making!

As most of us have already seen their television advertisement; Bangalore based – Practo Technologies is combinations of products which aim at either connecting the patients to the doctors and vice-e-versa or helping the medical professionals manage their clients / patients or work.

Out-beating all its competitors like HelpingDoc, DocSuggest, Qikwell Technologies and MediAngels.com, Practo clearly is India’s best and the largest Healthcare App.

{Trivia: – Shashank Was Also Selected For The Indian National Olympiad In Informatics(Inoi) In 2005}

Clearing the confusion first; Practo Technologies is a combination of two products – Practo Ray & Practo.com, which was founded by Shashank ND & Abhinav Lal in 2008!

Practo Ray which was formed first, technically speaking; is an online medical practice management software made for and used only by doctors and other medical personnel’s only.

Practo Ray offers various features for the benefit of the doctors and others such as – appointment scheduler, electronic medical record services, prescriptions, billing features, IVR telephony and other healthcare management services.

This SaaS (software as a service) tool can only use this product after purchasing the subscription of this software. Basically, the primary reason for its formation is to improve the medical practice management for doctors or other medical professionals.

Some of its Features and its Plans include:

Now on the other end; Practo Technologies in 2013 also launched their other consumer-focused product called Practo.com.

Practo.com is a portal that helps patients find doctors in different cities and to make it more simpler, the portal ranks doctors on the basis of their own research (due diligence) and patient recommendations. The beauty of this portal is that, if you are new to an area and have no clue about the doctors there, then this can turn out to be really helpful.

Additionally, none of the parties i.e. the doctors or the patients have to pay for the service. Practo earns its revenues from advertisements on the site.

Now, recently it has come to light that there are various kind of malpractices happening around in relation to the healthcare industry in India. Hence to safeguard itself and its customers, Practo goes an extra mile to ensure background verification of all the doctors listed on its platform, by doing thorough educational, membership and registration check with the Medical Council of India (MCI) and makes sure that every single doctor listed on their platform has an MCI number with them.

{Trivia: – Practo Is A Product Of Naabo Medical Solutions!}

The Formation & Growth Story Of Practo!

Shashank was studying at the National Institute of Technology, Surathkal (Karnataka). While he was busy with his studies, he was hit with the news that his father had to go through a knee replacement surgery.

Shocked till the core, he began taking all the necessary steps before the surgery. Wile at it, he had to send his father’s medical records to take a second opinion of an American Physician about the operation that his father was advised.

But to his unfortunate luck and due to the lack of technology in these hospitals and clinics, he was unable to access enough information, to make an informed decision before putting his father’s life in the doctor’s hands.

Clearly, this incident left a huge impact in his head, and unlike the rest of the masses, he decided to take the matters in his own hands and solve the problem for good.

He approached his close friend and classmate Abhinav Lal, while he was in his final-year biotechnology at the National Institute of Technology, Surathkal (Karnataka), and together, they planned to build a software to simplify health care.

The coding of the first version of Practo was completed within two weeks itself, soon after which they also easily found doctors who were interested in their product.

And eventually, the duo set up Practo Technologies Pvt. Ltd., surprisingly in their college hostel dorm room itself, in 2008.

Phase one of Practo Ray was in a way a demo-like software which was created based on the feedback they had received from the doctors.

Dr Ranjani Rao, founder of V2 E City Dental Centre, a chain of three dental clinics in Bangalore, was one of Practo’s first clients. Even after having a front office staff, she still went with the software because their job was being made easier and allowed them to make appointments, remind patients about visits, allowed her to scan her schedule remotely and so on.

With the unavailability of something of this sort, clearly this software worked in their favour and soon, they got selected at a Start-Up Acceleration Program initiated by Morpheus Venture Partners in 2009.

The training & mentorship they received at the program boosted their confidence greatly; hence by the end of the year, after its completion they expanded their second office in Chennai, Delhi and Mumbai as well.

Their only focus at that time was to spread the awareness amongst the doctors and the patients and the pace, strategy & concept with which they were moving ahead, success was clearly imminent.

With the success of its demo model, the duo decided to go live and circulate the software amongst the other doctors in Bangalore, many of whom started using it to streamline their practice.

By 2011; after setting their base well & getting decent business from the first few cities they with a team of just 9 people, later expanded their reach to Hyderabad and Pune as well.

To add to that, evidently they knew that the world was now moving to mobiles and it was very important for them to be on it too, so by the end of the year Practo launched their first ever Practo Ray Android App as well.

Next, the company made an unusual move and launched their Unique IVR Service- Practo Hello which helped the doctors to be connected to patients.

But the biggest jump was when in 2013, Practo Technologies launched their consumer- focused – Practo.com! Clearly, the purpose of this portal was to increase their range and to make it more user-friendly, and to tap the masses. And according to the founders, the reason for tapping the consumers so late was simply because they would not have been able to tie up with so many doctors in such a short notice.

Anyways as mentioned above, it had features like a ‘Unique Appointment Booking System’ which allowed patients to book instantly-confirmed appointments with doctors. And finally they ended the year by launching a Practo Ray App for iPhone users. 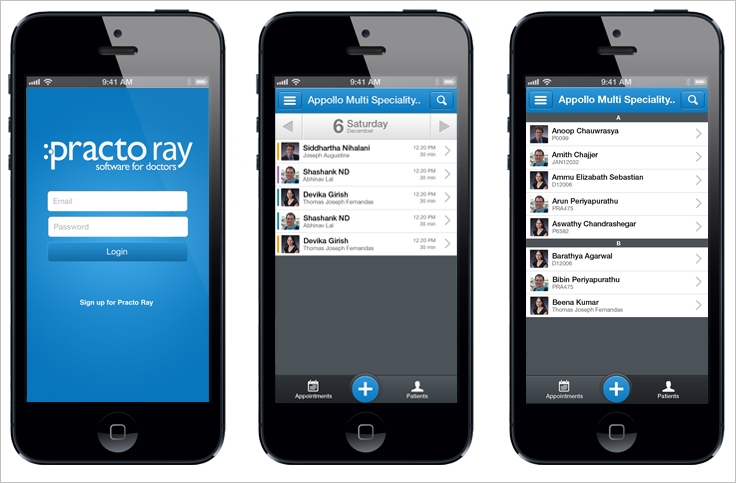 By now the company had reached to different heights; they had reached to become a 120- employeed organization which catered to approximately 8000 doctors, the cloud-based service managed approximately 10,000 appointments a day and the records of nearly three million patients. – reported on livemint.

Another leap the company took was when they decided to go global! In the same year, Practo launched their first ever office in Singapore, and in a matter of roughly two years since their launch, Practo Ray also became the largest online clinic management software provider in terms of market share.

Later, Practo was also seen presenting themselves to the European market at the IDS Conference in Cologne, Germany as an initiative to soon mark their presence there!

And looking at their current statistics; Practo currently lists almost 95,000+ doctors on its platform, who are spread across 100+ cities with close to 5+ lakh unique visitors a month, with nearly 1,500+ unique appointments a day, clearly they are leading the way.

Adding to that, they also have expectations to touch 20+ lakh visitors a month, with about 5,000+ appointments made in a day and Rs. 20+ Cr. in revenue soon.

Other than that; to increase awareness about the platform, Practo has also recently come out with their first television campaign.

To sum up the campaign, it has been executed by Lowe Lintas, and is seen featuring consumers from across various age-groups who come across various health-related problems but are not able to find the relevant medical help, and eventually resort to the Practo app and find the best doctors near their locations.

Coming to the present, Practo is now available in 12 cities across India and is used by more than 10,000 doctors, who store more than 16 million health records.

With a team strength of 500 employees; the company is presently growing at a rate of nearly 20-40% MoM (Month on Month) and is also in preparations to hire a thousand more employees by March 2016.

Over the next one year, Practo also plans to expand to 35 cities in total and subsequently to 7- 10 countries.

Other than that; they are also working on something called ‘My Health Records’ feature on their present platform. Using this feature a consumer would be able to upload his medical history through invoices and reports across hospitals.

Lastly, talking about their funding; the company has raised a total of $124 Million from investors like – Tencent Holdings (Lead), Altimeter Capital, Google Capital, Matrix Partners, Sequoia Capital, Sofina and Yuri Milner, so far.

– Shashank is the ‘Founder circle member’ of iSPIRT Foundation – Genii, a technology services firm founded by Varun Vohra and Aditya Anand focused on product design and development, was acquired by Practo in July 2015.

The complete team of Genii would be joining Practo. Apart from stable growth, another reason for the acquisition was their long term vision of making Practo the ultimate Health App!

- FitHo Wellness – a leading digital fitness solution founded by Dhruv and Prachi Gupta was acquired Practo in April 2015, again keeping in mind their long term vision. The acquisition also took place because the company intends to expand into the healthcare space and this would only help them smoothly introduce their offerings and move into the preventive healthcare space.

FitHo is already a profitable venture where more than 6% of their customers pay Rs. 900-1000 on an average, per month.

It is also believed that the company would also be acquiring the proprietary algorithm and recommendation engine, which automatically recommends custom diets and exercise regimens to users, on the basis of their lifestyle, fitness requirements and food preferences.

Other than that; Practo has also reported that, this is just the first level of their acquisitions and has planned several other acquisitions in the near future.