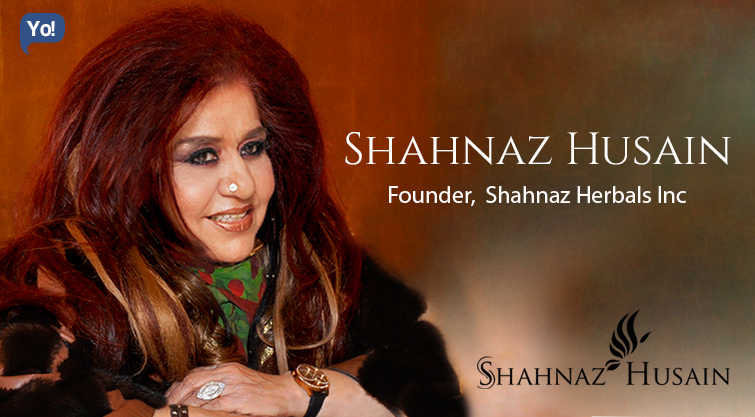 Most of us already have heard the name – Shahnaz Husain! The prominent Indian female entrepreneur is the Founder & Managing Director of Shahnaz Herbals Inc., which is best known for their herbal cosmetics, particularly skin care products.

The Group as we speak, covering over 138 countries has over 600 franchises and associated clinics across the world. To add to that, Shahnaz Herbals are also the only brands that produces Skin care products ‘without animal testing’ as well.

Shahnaz’s daughter – Nelofar Husain Currimbhoy, (named after the Princess of Hyderabad), is widely known amongst the business fraternity  for her interests in Research and development, and heads of the marketing and distribution network of the group. Nelofar Husain has equally played a very important role in helping the group climb the ladders of success.

An entrepreneur in true terms – Shahnaz believes that; if you are true to yourself, success shall ultimately follow and also that, it’s not what   you want in life that matters, but how badly and desperately you want it that does. Quality is more important that quantity!

And if look at it; all the success that she has earned in her life cannot be measured with money or any other materialistic feature, but with the  amount of happiness and self- confidence she has been able to fill into others.

Shahnaz Husain is the daughter of the late Nasirullah Beg, former Chief Justice of the Allahabad High Court. Beyond that, almost all the men of her family were either Chief Justices or Senior Politicians.

She was born in Samarkhand, to a Royal Muslim family and because of an influential father and family name, she got the opportunity to complete her schooling in an Irish convent school. During that time, she developed a sudden inclination towards poetry and English Literature.

But before anything could be done about that, she was engaged when at the age of 14 and subsequently married at 16. She even gave birth to Nelofar in the same year itself. And although she always knew that, she was never meant to be a regular housewife, but eventually the routine of a housewife started to set in.

But Shahnaz being different decided to beat the odds and began studying beauty from the very next year. And over the next ten years, she also went on from London to Paris, Germany, Denmark to New York, to achieve the ultimate.

Ten years later at the age of 27, she had to move as her husband was got posted in Tehran as head of Foreign Trade with the STC. Now she needed money for higher education, but because she couldn’t speak Persian, finding a job turned out to be very difficult.

After immense efforts, she finally got the opportunity to work as a Beauty Editor of Iran Tribune. She wrote on literally every topic one could think of, and gave 10,000 words a week, when the target was only 500 words.

Gradually, her confidence began to rise, and so did her income. Later, because her handwriting was difficult to read, she was asked to type the whole thing, and being new to typing, she hurt her fingers. But her determination to earn her way to higher education kept her going on.

During her stay there, while she dealt with skin disorders, she noticed that most of these problems were mainly due to the inclusion of synthetic cosmetics. That is when it clicked to her that, why shouldn’t she take up the task and fix it by producing the same from herbs.

At that point, she had two options; either start with a private clinic for human cosmetic cures, or simply enter the market with better cosmetic products. She ended up choosing to start a herbal clinic, with a thought that, certainly it would bring in lesser money, but would definitely gain her a sense of satisfaction.

Hence, after 2 years of specialization in cosmetology and trichology, she decided to come back to her homeland.

Upon returning back to India in 1977, she first set up her own salon at her house in Delhi, by borrowing Rs.35,000 from her father, but at the same time she also converted a veranda of her house into a clinic, as well. The good thing was that, she already had the technology and the relevant gadgets from abroad.

And by introducing a totally new concept of “care and cure”, along with formulation of her own Ayurvedic products, she began with Shahnaz Herbals Inc. 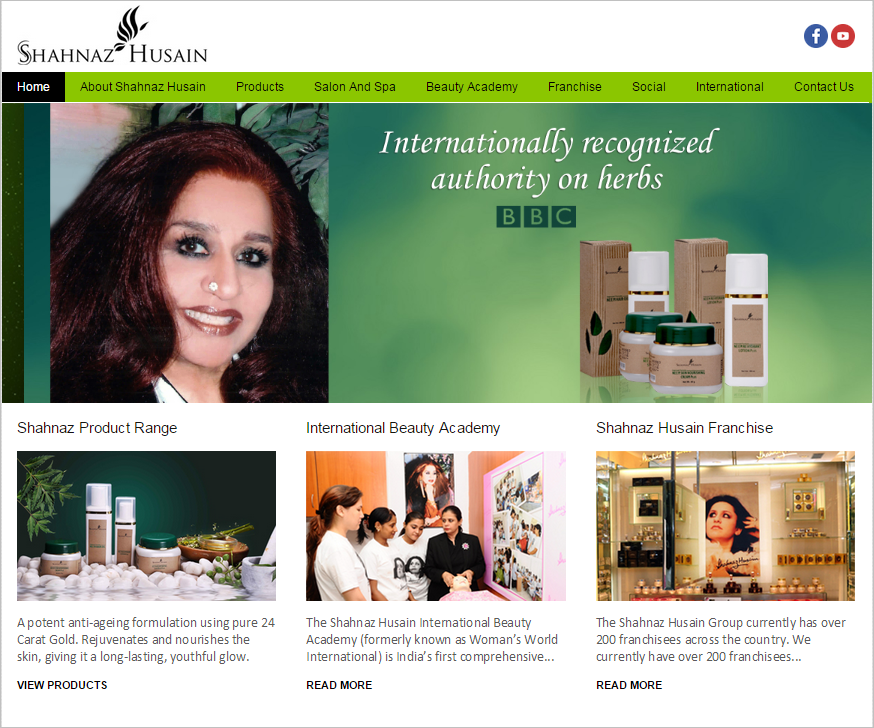 The Story Of Accidental Entrepreneurship!

Going against the wind; not only did Shahnaz enter the cosmetics industry, but she did so without doing any marketing. All she did was hung a banner outside her clinic, which had her qualifications and services offered mentioned. In a matter of few days, she was booked for the next 6 months and this word-of-mouth was enough for her to get the banner removed for ever. This also turned out to be a boon than a curse, coz her no-advertisement policy gained her so much popularity that it proved the very fact that, it is the product and service of a company that matters. And since then there has been no looking back for her!

Since 1980 to 1982; was the time when Shahnaz’s popularity scaled to global level and some of her achievements of that time included: -

But the real turning point in her career came when she represented India at the Festival of India in 1980.

Not only did the sales they did there broke the cosmetic sales record at Selfridges, but also got front-page articles on the Daily Telegraph with a headline saying, “Herbal Hell Breaks Loose at Selfridges”, and followed by a BBC television interview on Shahnaz named – “Meet the Herbal Hotline”.

During that interview abroad, she was told that, she had a superiority complex about India and her herbal heritage, to which she very calmly answered, “it is no complex – we are superior”.

And since then, they entered into the international market and began the extension of their chain of clinics and outlets rapidly, to every corner of the globe.

She always had a burning desire to motivate, inspire and encourage the Indian housewife to become career oriented. To do so, she also set up a beauty school called “Woman’s World International” and also followed a broad syllabus. She started this during a time, when only beginner training was available in beauty in our country.

She went a step ahead and also pushed all the housewives to learn beauty and open their own salons in their own homes, under her Shahnaz Herbal banner. This would not only help them build their career, but would also help them do so without having to leave their current household schedule and family.

What was even more great of her was that, she also started Shamute, a free training school for the speech and hearing impaired in 1984. It was inaugurated by the then President of India, Giani Zail Singh.

Soon after that, Shahnaz made the country proud on various occasions:

Now till the initial stages, till the early 90’s; Shahnaz Husain products were sold only in her salons located in or across Delhi. Later she decided to take a leap and entered into the retail market and changed her life forever!

As soon as she entered into the retail sector, the company instantly boomed and gained huge profits, and the demand was so much that she was forced to expand to the international markets as well. Shahnaz very intelligently used the franchising-mode to expand her business in India and abroad. To meet the demands, she also had to setup additional factories at Roorkey and Noida to meet the demands for both national and international markets.

And today after 36 years, when you look at the company; it has grown on to become a grand chain of 600 Franchises clinics & 400 Distribution Partners deeply spread across India and 138 countries abroad, under the Shahnaz Herbal banner. 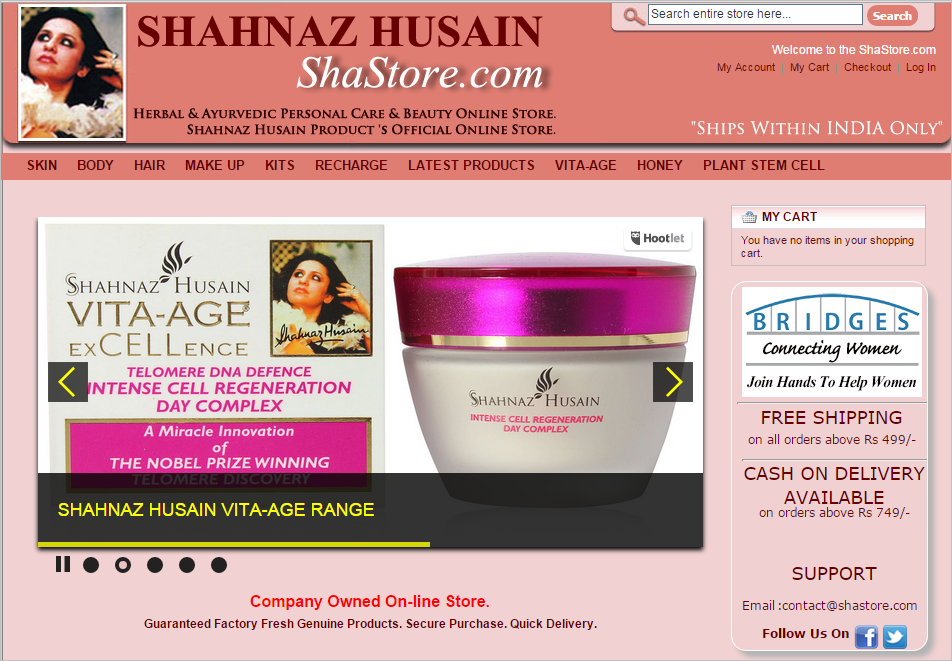 With employee strength of 4200 people, Shahnaz Husain’s empire is a Rs. 250 crore a year laying golden hen. And this empire of hers is steadily growing at a 19.4% growth rate YOY (Year on Year).

And surprisingly, all of this has been successfully achieved without a single piece of advertisement. All she has done so far is that, she has been writing columns and articles for papers, magazines and (now) contributing to websites, globally.

Shahnaz Husain herself & her group have massive plans to grow in specifically three different verticals.

To begin with; Shahnaz Husain Group is planning to set up joint ventures with some of the reputed business houses and multinational companies, to enter into newer markets globally. They have also received many offers for joint ventures, and would soon be taking a final call.

And secondly, the group also will be opening treatment and de-stress centres along with spas in hospitals, where people going through treatments can relax and rejuvenate themselves.

This would be done either at the same pace or soon after the aforementioned project is completed.

On the other hand; Shahnaz Husain, is in process to co-author a book on beauty along with her daughter Nelofar. The book is titled to be – ‘Too beautiful to be true‘, and shall be published in Malayalam and English.