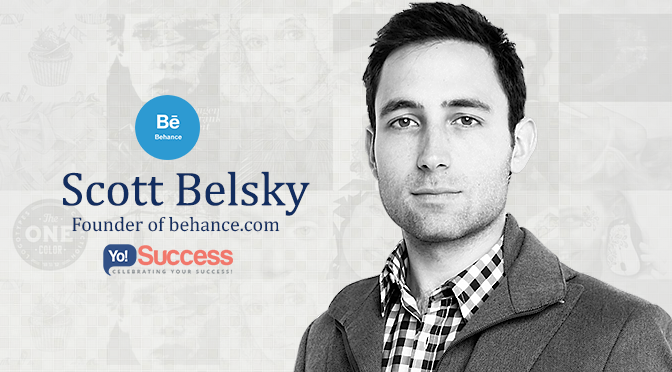 Born on the 18th of April 1980; Scott Belsky – the American entrepreneur, is widely known for his earlier stint Behance Inc. Behance being an online portfolio platform, is a one-of-its-kind portal wherein one gets an opportunity to showcase and discover creative work, and along with that you can also track and find top talent across the creative industries

Presently, since the sale of Behance to Adobe in 2012, Scott acts as Vice President of Products (overseeing Community & Mobile) for Adobe. Other than that; he is also an Angel Investor and has funded as many as 19 companies from various genres, so far, some of which include; Pinterest, Uber, Shyp, ManagedByQ, Paper, Paddle8, Warby Parker!

Additionally, Scott has also written the national bestselling book – “Making Ideas Happen” and has also extended his helping hand to organizations such as GE, HP, Facebook, MTV, and the US Government.

He also remains an actively advisor to many businesses on the grounds that cross the intersection of technology, creative industries, empowerment of creative people and independent careers.

Lastly, Scott has completed his graduation from the Cornell University and later went on to complete his MBA from the Harvard Business School. Currently, he lives with his wife and daughter in New York City.

Scott Belsky is man who has been gifted with an immensely unique creative mind since birth, and even though he could have very shrewdly used it for his own personal benefits, he chose to do the complete opposite and took an initiative to use his creativity for the advantage of the masses, at large.

But for all this to make sense or fall in place, he had to choose a career path for himself, and so he did!

He began with his career as early as in the year 2002; just after he had completed his graduation with Cornell University. And believe me when I say this, a creative mind like that of his began working for Goldman Sachs & Co. – an investment banking firm.

This stint of his went on for almost 4 years, wherein initially he was put to work for the European Markets for almost two long years, after which he was moved to further help strengthen the Pine Street Leadership Development Initiative, for the latter two years. Here his primary task & focus was on organizational improvement and strengthening of relationships with clients.

Now while all this was going on, his creative urge to do something different, something which justified his talents, and something which could benefit creativity at large, kept pestering him. As the urge for the same grew stronger, he became even surer what he wanted to do and what he was really made for!

How was Behance Inc created? 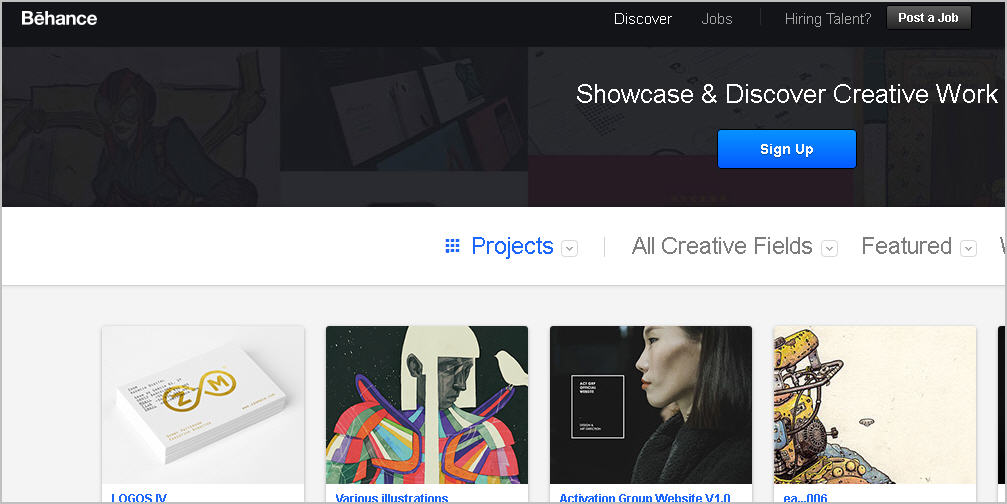 Scott for a fact knew that, even though technology is spreading life fire but still most of the creative professionals globally lacked a specific platform that would give them the leverage to showcase their work and connect to potential clients.

To solve this pain point, Scott began working on a project that could potentially wipe out that issue, for good.

In the beginning, instead of rushing things ahead, just like many digital entrepreneurs; he too, started working in the off-hours after his full-time job at Goldman Sachs.

He believed in the idea so much that; even though it was just a few hours that he could manage, he still made sure that he gave his whole-&-soul to it. He began to fully explore the concept of Behance, its potentials, reach, offerings, benefits, and every other aspect before taking the plunge. Additionally, he also began a thorough research about how deeply and largely his idea would impact the society or industry itself.

Now even though his passion was so much that he could move mountains, but in reality he knew that the Behance would be a design-centric business, and he had no idea what this meant.

As a counter measure, he started approaching his near-&-dear ones, to introduce him to the best designers they knew. With their help, he also met many people, but somehow he couldn’t find what he was looking for. But one fine day; he came across Matias Corea – his to-be co-founder, and things changed completely for him!

After meeting him, he realized just how much he had to learn, and since Behance was still in its planning stages and keeping in mind that both the co-founders had full-time jobs to manage as well; they started meeting up at night to explore the concept further more in detail.

Due to their tight schedules, they used to meet up thrice a week for many months, and often ended up working from 9pm to 1ish. During these meet-ups, along with the exploration of the idea, Matias also used to teach Scott about typography and the principles that would ultimately lay the foundation of Behance.

TRIVIA: Scott used to pay Matias from his own pocket to help explore the project.

After a brief but long enough phase of brainstorming, exploration & teaching sessions, the idea started to look clearer to them and it was now time to build a team & make Behance happen.

Hence, without further ado; Scott left Goldman Sachs to divert his focus, fully on the project and at the same time also joined the Harvard School of Business.

As much as Goldman was just a passing phase with no future, but the fact remains that it did train him to combine his skills, genuine interests, and even more importantly gave him an opportunity that created Behance!

What did Behance Inc transform into?

Now, in the initial days of Behance, in a rush to create more options for the company and to get into the market with the bang, Scott made a mistake of expanding way too early and eventually these “Expansions” of his although were surviving but did not end up thriving, as expected.

This led to a situation where at a point they had way too many products at hand but they were unable to devote their resources to the ones which had comparatively more potential.

This was a classic mistake made by start-ups! He was trying to eat more than he could chew, which ultimately led to getting his hands dirty.

But at the same time, he understood where the problem lied and what needed to be done, and in an attempt to fix the situation, as much as painful it was for him, he eliminated the root causes of the problem and even the stuff that wasn’t necessarily underperforming.

Anyways, just like most start-ups, the early years of Behance too, was a cusp of many things including the most significant ones being decent success and numerous lessons, which they accepted gracefully!

And this led to the opening of a different era altogether! Gradually the company began to grow and expand, but this time more strategically.

Partnered with some of the most reputed organizations such as the AIGA (American Institute of Graphic Arts), Adweek (weekly American advertising trade publication), ADC (Art Directors Club), MTV, etc. to build galleries of creative work for them.

By the year 2011, Behance had reached to stage where they were receiving more than 9 million visitors and 50 Million page views from them every month.

To add to that; Scott also grew his area of network slowly, and also created & included two more websites “the99percent.com” and “actionmethod.com” as, which ended up becoming the research divisions of Behance.

And today, it has transformed into becoming the world’s leading platform for creative professionals across majorly all industries. Today, one can go on to the platform to create multi-media portfolios that leverage them to showcase their work within the Network, along with the other partnering sites and organizations, and the industry-specific Served Sites.

Behance is on the path of revolutionizing the way creative professionals have been managing their careers and the way the companies have been finding talent. And it has all been possible due to a team that is solely focused on cultivating “Productive Creativity” in the creative community. A team that develops knowledge, products, and services which help creative professionals and organizations lead their ideas to life.

Today, it has become pretty much common for them to see millions of visitors including top creative companies, editors, recruiters, and so many more visiting the Network, to see the commendable work done by a pool of talented minds.

Additionally, it also powers portfolio display for some of the top notch organisations like LinkedIn, Cooper-Hewitt, AIGA, AdWeek, National Design Museum, Art Center College of Design, SVA (School of Visual Arts), RISD (Rhode Island School of Design), among other sites around the web along with 100,000+ personal websites as well.

It has now grown on to become an array of sites and services which specialize in self-promotion, including consulting and online portfolio sites.

Under the Behance wing, it presently has products such as: –

But by the end of the year & after more than 6 years later; an era created by Scott Belsky – that started with a bang, went on to touch millions globally, eventually got acquired by Adobe for a whooping $150 Million.

The acquisition came off as a shock to many, as the company was at a different height altogether and could have sustained well by itself, but nevertheless for unknown reasons Scott sold it off.

Since then Scott also moved in within adobe and presently acts as the Vice President of Products (overseeing Community & Mobile) for Adobe.

Today, he leads the Behance business unit along with the community and social sharing / collaboration product efforts at Adobe.

With him still on board, Behance has more than doubled its users to 2.5 million and has also increased its headcount from 30 to 50 employees.

Other than that; with the success of design-driven start-ups designers have gained the limelight of the start-up world and several new venture capital funds have also come up which invest solely in start-ups that are founded by designers.

Capitalizing on similar situation, after being approached by several venture capitalist firms, Scott found one that fit his requirement and has joined in as a Founding Partner at “Founder Collective”.

It is an early stage venture capital firm which has partners that are all entrepreneurs by themselves, some of which include: Chris Dixon (SiteAdvisor), Eric Paley & Micah Rosenbloom (Brontes Technology), Dave Frankel (Internet Solutions and HealthBridge), Mark Gerson (Gerson Lehrman Group), Zach Klein(DIY and Vimeo), Bill Trenchard (LiveOps), Klein and Catarina Fake (Flickr and Hunch) & Gaurav Jain (Polar Mobile). Scott will also be investing an undisclosed amount of his own capital into the fund.

Apart from that on an individually note, Scott has also made 21 investments in 19 different companies and holds notable positions in most of them, some of these include: –

Scott and his products since the beginning have been at the centre of accomplishments, some of them include: –