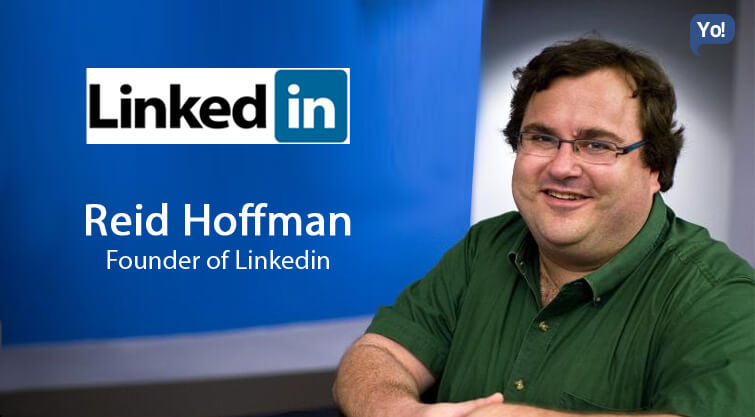 Born on the 5th of August 1967, Reid Garrett Hoffman is an active Entrepreneur, Venture Capitalist and Author.

He is more famously known for founding LinkedIn. Reid currently acts as the Executive Chairman of LinkedIn. As of date, with a net worth of $3.7 billion, he is ranked #159 on the list of the world’s richest people on Forbes.

Reid is known to be the most connected man in Silicon Valley and also belongs to “PayPal Mafia,” a group of former PayPal employees and founders who have since founded and developed additional technology companies, and have become millionaires or billionaires.

Talking about his personal life – Reid was born in Palo Alto in California, to Deanna Ruth and William Parker Hoffman Jr., and grew up in Berkeley in California. Currently, he is married to Michelle Yee and lives in Palo Alto itself.

After completing his schooling at The Putney School, Reid went on to pursue his graduation from the Stanford University in 1990, where he managed not only to win the Marshall Scholarship, but also the Dinkelspiel Award, along with a Bachelor’s of Science in Symbolic Systems and Cognitive Science Degree. Later, he even completed his Masters in Philosophy from Wolfson College, Oxford University in 1993 as a Marshall Scholar.

How Was His Early Life?

Since his college days itself, Reid wanted to do something in life that would help him to influence the state of the world on a larger scale. He knew that he had the solutions to world’s problems, and wanted a position from where he was clearly audible.

At first, he believed academia to be an opportunity which would help him to create that “impact”; the idea was to become a professor and public intellectual, but with time, he realized that academics write books that very few people read, and an entrepreneurial career would provide him with a larger platform, along with the means and resources.

With the thought of changing the world for the better, Reid decided to pursue a career in business and entrepreneurship. But to do so, he needed experience, hence, he joined Apple Computers in 1994.

He was a Senior User Experience Architect and was responsible for the design and launch of eWorld International, Classifieds, Global Access Assistant, and other strategic projects. In 1996, eWorld got acquired by AOL.

After working there for around two years, he moved on to join Fujitsu Software Corporation for about one-and-half years, as a Director of Product Management and Development in Feb 1996.

How Was His Life As An Entrepreneur?

Post this stint, he then went on to start his first venture – SocialNet.com in August 1997. SocialNet, the idea that was way ahead of its time, was a platform for online dating and matching people with other people of similar interests in their neighbourhood.

Other than the timing of the idea; Reid even learnt that, as much as building a really great product is important, one must also have a decent product distribution strategy in place, to reach out to the millions of users.

While at it, Reid was also a Member of the Board of Directors during the founding of PayPal, so when he decided to shut down the online dating portal, he was asked to join PayPal in 2000.

They knew that, Reid was an expert at competing effectively in an extremely competitive environment hence, he was made responsible for all external relationships for PayPal, including payments infrastructure, business development, government, and legal.

In the three years at PayPal, Reid was known as the Firefighter-in-Chief. He was taken on board as the COO, and during the time of PayPal’s acquisition in 2002 by eBay for $1.5B, he was at the position of Executive Vice President.

After leaving PayPal, he then went on to create the world’s first and largest Professional Networking Platform. LinkedIn!

Since long, Reid craved to start a business which would help the professional world to network with each other. So after leaving PayPal, Reid along with two former colleagues from SocialNet, one former colleague from Fujitsu, and a college classmate; he co-founded LinkedIn in December 2002.

To give you a gist about the business model of LinkedIn: –

It is a social networking service that is mainly used for professional networking. LinkedIn has adopted a Multi-sided Platform that offers different solutions to different categories of users. Basically, the model has something for everyone, to make sure to keep everyone happy.

In addition to these, one can also access many other business solutions such as: -

LinkedIn Jobs: it helps companies listed on the network to advertise job opportunities

LinkedIn Ads: it is a self-service platform which helps advertisers to build and target their advertisements at its target audience on a wider and more accurate level.

LinkedIn earns its Revenues from 3 main streams – Talent Solutions, Marketing Solutions, and Premium Subscriptions. They also have several other elements such as InMail that are on a pay-per-use basis.

Talking about their GROWTH STORY: -

Launched in May 2003, the company had been started with an initial investment that was received from Peter Thiel and Keith Rabois.

Just like most other businesses, LinkedIn too, did not receive a fast rise. Growth was quite slow in the beginning. As few as 20 signups used to happen on some days.

By late 2003 and early 2004, LinkedIn introduced the feature wherein one could upload address books, which further attracted and accelerated the growth. Further, they also added various other features like Groups and tie-up with American Express to boost its offerings to small business owners.

In the next two years, LinkedIn introduced quite a few developments like Jobs and Subscriptions for businesses, public profiles, Recommendations, People You May Know, etc. and also moved into its fourth office in three years. By 2006, the company also had achieved profitability.

Later, the next two years saw the stepping down of Reid as the CEO for Jeff Weiner, who had earlier worked for Yahoo. Reid moved on to become the Chairman and President, Products.

By 2010, LinkedIn had become a globally established entity with several international offices and also held a valuation of around $2 Bn.

In 2011, after receiving a total investment of roughly $110 million from investors including Sequoia Capital, Greylock, Bain Capital Ventures, Bessemer Venture Partners and the European Founders Fund; LinkedIn went public! Reid’s stake in the company was estimated at $2.34 Bn.

The same year, LinkedIn announced earnings worth $154.6 Mn in advertising revenue alone, which was far more than Twitter.

In 2012, LinkedIn, the portal went through a complete transformation in different ways, but as a whole was focused on three concepts: simplify, grow, everyday. Over the period of time, LinkedIn has gone on to become the first and largest professional networking platform that now accounts for more than 400 million users in more than 200 countries.

And lastly, as of the last update in 2014, with a strong team of 7600 employees with in offices across 30 cities around the world, LinkedIn makes revenues worth $2.21 Bn.

How Has Life Been As A Venture Capitalist / Investor?

Since the beginning of his career, Reid had managed to work the entire tech start-up ecosystem, post which he decided to become an investor to give the talented the rightful opportunity they craved.

Hence, after the sale of PayPal to eBay, he moved on to become one of most prolific and successful investors in Silicon Valley.

Some of his current investments include Airbnb, One Kings Lane, Swipely, Viki, Coupons.com, Edmodo, Wrapp, TrialPay, Xapo, and Talko.

What is lesser known to many, is the fact that, Reid was the one who had arranged the first meeting between Mark Zuckerberg and Peter Thiel.

Reid was very impressed with Facebook’s plan and had also agreed to make a substantial investment in them, but since he also had LinkedIn on the other side, he felt that taking a more prominent position in Facebook would be a conflict of interest with his leadership role at LinkedIn.

Hence, he introduced Mark Zuckerberg to his friend Peter Thiel, which eventually led to Thiel’s initial $500,000 angel investment in Facebook. This round also included a small investment from Reid.

In 2010, Reid joined Greylock Partners – a Venture Capital Firm, as a Partner and currently runs their $20 Mn Discovery Fund. He also collaborates with Simon Rothman on Greylock’s Marketplace initiative as well.

While at it, his major focus lies in the world-class entrepreneurs who possess new categories of ideas which hold the potential of massive scalability. Other than that, he also hunts for companies which fall under his the domain of his own product and innovation experience, which includes – Consumer Internet, Enterprise 2.0, Mobile, Social Gaming, Online Marketplaces, Payments, SAAS, and Social Networks.

Reid is widely known and accepted by many industry insiders to arguably be the most successful angel investor in the past decade, and is the person you must talk to when you are starting a company.

Since his beginning, Reid wanted to influence the masses for greater good of development at large, and writing was another way that he adopted to achieve that.

Over the period of time, Reid has published a variety of posts as a “LinkedIn Influencer” on LinkedIn, one of which includes – an essay proposing a new form of credentialing for university students and professionals entitled “Disrupting the Diploma”.

He has even published a variety of posts on his personal website, which included “LinkedIn’s Series B Pitch to Greylock: Pitch Advice for Entrepreneurs”.

This book has been co-authored by Reid and Ben Casnocha. It was released in United States on February 14, 2012.

As of September 2012, the book had sold more than 100,000 copies and had also become a New York Times and Wall Street Journal bestseller.

The book was released in the United States on. It talks about that individuals must consider themselves as a business and the “CEO of their own career”. Additionally, it also shows how this strategy can help an individual in their career, by comparing it with the lessons learned from the stories of successful Silicon Valley technology companies.

This book has been co-authored by Reid, Ben Casnocha and Chris Yeh. It was released in the United States on July 8, 2014. It was a New York Times bestseller.

It talks about how the times have changed and that previous career models don’t work in today’s continuously changing era. The book proposes that employers and employees should work as “allies” of each other and also suggests a new framework for managers and employers called – “tours of duty.”

It also insists and explains that, managers should encourage their employees to gather “network intelligence”, and that companies should further maintain a lifelong relationship with former employees through a corporate alumni network model.