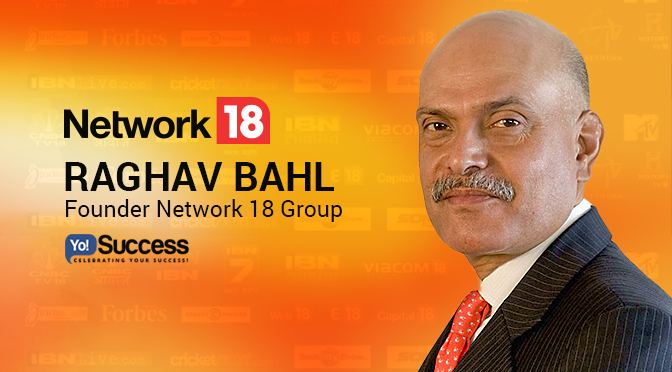 Unknown to many but called as the “Rupert Murdoch of India;” Raghav Bahl is the founder of Network18. Until before the grand take over by Reliance Group happened; he had founded, directly owned and had the controlling shares of Network18 and all the companies which were under its wing including television, print, internet, film, mobile content, going beyond the level of count.

Being the one of the pioneers of the Indian News Broadcasting Industry; Raghav is also the first generation entrepreneur in his family, his father was an IAS officer in the Rajasthan-cadre. He is married to Ritu Kapur who also a director in Network18 and currently Manages the show at his latest digital venture.

He was a man who strongly believed in grabbing every opportunity that came his way, and at times he was also converting deals overnight. With an experience of over 22 years in television and journalism, he has single handedly managed to uplift & bring his career to such great heights, and has earned every single bit of respect that he receives today.

A St. Xavier’s School, Delhi pass out, Raghav holds a graduation degree in Economics Honours from the St. Stephens College, and a Masters degree in Business Administration from the University of Delhi. Additionally, he had also attended a doctoral program at the Graduate School of Business, Columbia University, New York, but left it midway. He was also a university-level Squash Player, but due to an accident in his early days, gave up on the sport & now uses yoga and breathing exercises as a way of life, which begins at 5am every day.

Other than that; after quitting Network18 gave life to his long craving passion and wrote a book – ‘Super Power?’ which compares the two developing countries China and India. And more recently, he started his brand new firm called – The Quintillion Media Pvt. Ltd.

Raghav never vision himself to become an entrepreneur, but lesser did he know then, that he would turn out to become one of the rarest gems India would ever have.

He had first developed a particular passion in broadcasting, while he was a student but instead of taking that route, after college Raghav joined and began working for a multinational bank.

He had joined AF Ferguson as a management consultant in the beginning and later also went on to work with American Express.

Now even though he used to be a banker back then, he still to fulfil the inner craving for his “hobby”, by doing youth programmes and moderating debates for the state broadcaster. But due to limited scale of that industry, he could not take that up as a career.

After being unable control his longing desire, Raghav took the leap and finally took up his first job in the Media industry in 1985, as a Correspondent & Anchorperson for Doordarshan. His work included Anchoring and Consultant for the Production for India’s first monthly video newsmagazine – Newstrack, which was produced by the India Today group.

For a few years he continued the same job, until he got the opportunity of a life time in 1991, to work for Doordarshan as their Executive Director of Business India Television and produced the Business India Show and Business A.M.

Now until before the 90s, be it foreign or otherwise, private enterprises were not allowed to set up television stations or transmit TV signals. And India just had only two state-controlled television channels.

But the beginning of 90s saw a sudden massive explosion of drastic change, when the Indian government changed and relaxed its policy and gave entry to the privates be it; foreign or domestic programmers, to broadcast via satellite television.

The impact was so phenomenal that, a whole new industry was born overnight, in literal sense! Foreign companies quickly began the procedures to import or launch their own output for this whole new set of audience.

And on the other end; the audience was seen to be going all gaga about it, while they screamed to watch the broadcasts. People installing dish antennas, taking wires and hanging them across trees and roads to reach people’s households, was a common sight!

But what many business minds failed to notice was the fact that; regardless of television programming becoming suddenly available, Raghav realised that there was something missing.

He noticed that, the only content that was made available for the audience was largely hampered by the foreign content and frankly, after a point India would not enjoy the streaming from & about the imported entertainment or news programming. What India needed was local programming; it had the potential to grow big!

The Ascend, The Descend & The Mighty Return!

This gap in the market inspired Raghav Bahl to think of options and without much of thought, in 1993 as a television production company providing Indian content for satellite broadcasters – Network18 was launched!

Apart from the government reforms that took place, his earlier banking stint and the management skills he had learnt while studying, came of great help to him in launching a company of his own.

And with that, there was no stopping to them, they rose & rose & rose!

After a while, he also started with a show on STAR Plus called – “The India Show”, it was involved with India Business Report on BBC.

And Later, BBC in London and Star TV in Hong Kong picked them up and greed to broadcast them on their Indian channels too.

And soon the picture of their company become such that, the company at one end was producing programmes with local content for foreign channels and on the other end they were also producing content for other domestic channels broadcasting in India as well.

They without even sitting on the throne were ruling the kingdom!

In 1999, Raghav took a very bold but at the same time, the wisest step of his life and got in CNBC as a partner. This also created the perfect opportunity to rope in professional talent, and having said that; he hired Haresh Chawla, an IIT & IIM graduate, who had earlier worked with HCL, the Times Group and ABCL. Haresh was given complete freedom to make any kind of changes he felt were necessary.

The year of 2000, saw a complete & huge transformation of Network18; when Raghav took the decision to switch from a production company to a 24 hour India-focused television channel. This was also the biggest step taken by the firm, so far!

The primary reason to shift from news to television was that he had realised that their company lacked resources which were required to grow their news programmes.

The timing of this transition of theirs was just perfect because, they were already providing Indian business news for CNBC Asia, and during the same time CNBC had decided to establish itself firmly within the Indian market and as Network18 had already proven their worth, they turned out to become their ideal choice.

And in no time, a joint venture was set up between the two, to launch an Indian business news channel – CNBC-TV18.

Five years later, he used the same business model and took CNN away from right under NDTV’s nose to launch a general television news channel for India with CNN. Following that, he also got in Rajdeep Sardesai and Sameer Manchanda to set up CNN-IBN.

Another smart move played by the company was in 2004, when it launched its IPO and went public in an attempt to strategically place itself in the battlefield.

In July 2008, Network18 was considered to have take the biggest risk ever, when it got into a JV with Viacom to launch its most depended – Colors (a general entertainment channel) in competition with STAR, Zee and Sony, who till now had maintained their dominance.

This decision was also considered to be risky because, to launch something of such huge stature, Network18 had raised something between Rs. 300crores to Rs. 500crores, an amount which was about half or more of Network18’s then revenue. But luck favoured the bold and the channel took off like fire, and today, it accounts for a large chunk of the group’s total revenue.

With that, Network18 became one of the hottest media firms of the country. A company that had started from revenue of Rs. 0.00, reached to Rs.15 Cr in 1999, had suddenly risen to Rs. 647 Cr. in 2008, and out beaten its rivals like NDTV and TV Today by huge numbers.

Other than that it also had zillions of internet offerings as well like in.com, moneycontrol.com, firstpost.com, Cricketnext.com, Compareindia.com, tech2.in.com, homeshop18.com, fakingnews.com and a hell lot more!

Everything seemed to be going great and they looked unbeatable as well, but all of sudden the unimaginable happened and their success began to cripple after 2008

The year of 2008 saw the worst global market crash in the world, where many top notch firms like the Lehman went bankrupt. Money and markets had completely dried up. But unlike the rest, Raghav continued to invest-in Viacom18’s proposed movie channel, in Forbes and in a host of print and online properties.

But with the market so jittery; soon, advertising began to slowdown and the increase in carriage fees and interest rates started creating a lot of pressure for them. And by 2011, Network18 had piled up a huge debt of INR 1,400 crores on revenues.

In an attempt to fix things straight, Network18 started looking for a saviour, and that is when entered Reliance Industries. Mukesh Ambani led-Reliance helped the firm come out of debt by lending them that amount.

That was because Reliance had loaned that amount but on a condition of “zero-coupon optionally convertible debentures into shares” which meant that within a period of 10-years, reliance could at any point of time convert those debentures into shares and get a controlling stake of 99.9% in the firm; in other words – they could take over the firm at time within 10-years.

And like many had seen it coming; in 2014, Reliance Industries Ltd (RIL) officially announced its takeover of Network18 Media & Investments Ltd, including its subsidiary TV18 Broadcast Ltd. and the board of RIL approved funding of up to $ 40 billion (Rs. 4,000 Cr.).

To add to that; following the acquisition, the entire founding team – (editorial and managerial) put down their papers and A P Parigi was made the Group CEO along wtih Umesh Upadhyay, the President for News at Network18.

And a prodigy once proudly started with a bang, came to a sad end. Since then, Raghav acts as a Non-Executive Director at Network 18 Media & Investments Ltd.!

Like they say: “The show must go on!” Similarly, Raghav didn’t loose hope and along with his wife and all the money that he had earned decided to make a comeback with a bang!

Soon he made an announcement that he will be launching The Quint under its parent company Quintillion Media Pvt. Ltd. The Quint is a popular, digital journalism portal which has a smooth blend of video, audio and text; which makes the hard news, easy and covers almost all the sections from politics, policy, entertainment, sports, business, food and everything else that matters.

It was lesser known and even more interesting was that; The Quint is powered by a new digital publishing platform called The Quintype, which is similar to WordPress and has plans to beat it at its own game.

Co-founded by Raghav Bahl, Ritu Kapur & Amit Rathore, Quintype is based in San Franscisco and apart from the many other services, it claims to offer a cloud-based solution for publishers to manage editorial (assignments & collaborating), publish to various formats and development of apps for iOS & Android.