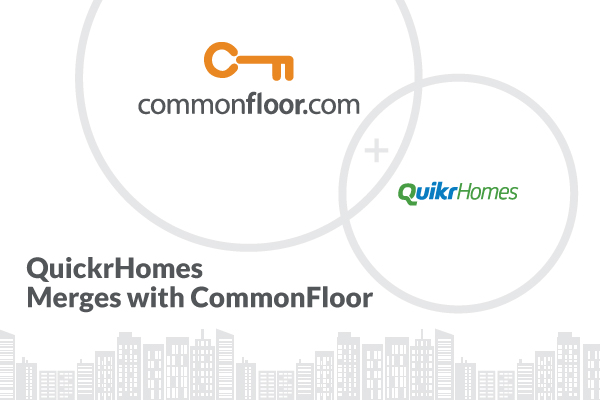 Quikr, recently in the first week of January announced that it has merged CommonFloor with its real estate vertical QuikrHomes.

This deal, not only is the largest deal of the year but also marks the end of CommonFloor’s eight-year journey as an independent company.

Although, both – Quikr and CommonFloor have been very secretive about the transactional value, but it is anticipated that it is an all-stock and complete share-swap deal valued somewhere between $100 and $130 Mn. CommonFloor will be getting a little less than 8% stake in Quikr, and absolutely ‘no cash’ has been exchanged.

Other than that, the investors of CommonFloor have swapped their stocks with that of Quikr, and there would also be a two-year lock-in for all CommonFloor shareholders as well.

The beauty here is that, both Quikr and CommonFloor find great synergies in each other and have a common aim of creating businesses that are strong on growth and monetisation.

The merger will take around two to three months to complete, post which, it will give both the parties a fierce war chest to fight the battles together. The company would be investing around Rs. 250 crores in the combined entity.

CommonFloor will get access to Quikr’s 30 million consumers and reap the benefits of the cross category nature of the Quikr, while QuikrHomes will benefit from CommonFloor’s structured data and domain expertise. This transaction will not only boost up the growth of QuikrHomes, but also their other verticals as well.

Will Commonfloor Operate As A Separate Entity? How Will They Be Functioning Together?

To begin with – they will be working in a cross pollination format wherein both will get an opportunity to benefit from each other. CommonFloor will get access to Quikr’s 30 million consumers and reap the benefits of the cross category nature of the Quikr, while QuikrHomes will benefit from CommonFloor’s structured data and domain expertise, along with boosting up their other verticals as well.

Now not the parties – Quikr and CommonFloor, have been tightclipped on the terms and conditions of the deal, but one thing is for certain that, with a combined listing of two million, Quikr and CommonFloor will be fighting the battles together, but as separate entities.

Yes, Quikr will continue to operate both brands in the market as a parent company, but honouring the commitment towards their respective customers, QuikrHomes and CommonFloor will operate as separate websites after the merger.

The idea is to operate both the brands, but by having different positioning. For one, since CommonFloor now has the backing of Quikr, they would be focusing more on CF Groups (CommonFloor Groups), and would be going ahead with 10-times the aggression. For those unaware, CF Groups is a discussion forum and directory to exchange information as well as handle association finances for residents associations.

Talking about the founders of CommonFloor; well, none of the parties are ready to reveal the eminent, but they are committed to the combined entity, and for the time being the entire CommonFloor team would be working from their current office only, with a few overlap of employees in the coming months, of course!

Also, as a part of the deal, there won’t be any layoffs at CommonFloor, but in fact, since they need more people than both the teams put together, they would be hiring more employees. CommonFloor has about 1,000 employees, while QuikrHomes has 350 people.

Why Such A Low Valuation For CommonFloor?

During the last round of investment of CommonFloor of $15 Mn in December 2014, they were valued around $130 million by Google Capital in December 2014. There is no official confirmation, but according to the people closely related to the deal, the transaction value is anticipated to be between $100 and 130 Mn.

The most shocking part of this current merger of CommonFloor with Quikr was that, the deal had valued CommonFloor, even below its valuation in the last round of funding.

Due to this, Google Capital will have to write off a considerable amount. But since, as a part of the deal, the investors (including Google Capital) will be swapping CommonFloor stocks with that of Quikr, they may potentially recover some of the losses if Quikr sees sizeable growth over the next few years, but for now, it’s a loss for them.

Now what is even more shocking to note is that; according to documents with the Registrar of Companies – Quikr had reported sales of Rs. 24.78 crores for the year ended 31 March 2015, while CommonFloor had reported Rs. 45.76 crore that year.

So even after generating much larger revenue than Quikr, why does CommonFloor have a lower valuation?

Well firstly, the way valuation is calculated by eCommerce investors is very different and may come across as unusual to many other shareholders in traditional businesses.

Taking the present example – Classifieds firms like Quikr hold far more larger customer base, which can be monetized in the future through different mediums. Basically, whoever has more users, calls the shots!

Other than that, Quikr primarily also has just one rival to fight with – Olx, while on the other end, the online real estate world is filled with a list of competitors, five of whom hold a lot of firepower.

Why Did CommonFloor Sell?

After their previous round with Google Capital a year ago, CommonFloor even after having a robust technology platform, had been struggling hard to raise more funds, or monetise their business model.

At that point, CommonFloor with more than 5 lakh active property listings from over 200 cities, and over 1 lakh residential projects listed, was one of the industry leaders and had the largest inventory and property seeker traffic in the country as well. Even then, Tiger Global (their existing investor) had also denied their request to give more funds.

To give you a better perspective –The VC industry works in a way that, if an existing investor says no or if an insider in a company stops supporting you, then potential new investors become sceptical, making it very difficult to raise more funds. And if the existing investor is a well-funded one like Tiger Global, then boy you’re in trouble!

Now the problem here was that, after funding more than 20 start-ups since around 2 years, Tiger Global had stopped going ahead with any new rounds of financing in most of its portfolio companies, and instead was seen to be encouraging them to find other ways like – new investors, cut losses, or sell out. This was also partly due to the national slowdown in the real estate industry in India.

As suggested by a property expert, the main problem with CommonFloor was their inability to monetize their business model. And when that becomes your problem, they are left out with very few options.

Anyway! On the other end, Quikr was aggressively looking for acquisitions for their newly launched QuikrHomes, which at that point, was connecting customers from over 1000 cities and towns across India, and accounted for 35% of the revenue of Quikr as a whole. They had doubled its focus on the homes vertical with the launch of Quikrhomes.com.

That is when Tiger Global – a key investor in both Quikr and CommonFloor, brought both the parties on the table to discuss a potential merger. Given the growing competition in the space and the present market conditions, they influenced both parties to, and acted as a driving force behind the deal. Accel India, who also was an early investor in CommonFloor, also supported deal.

One thing led to another and finally, just four months after the launch of QuikrHomes, Quikr, acquired real estate portal CommonFloor.

Why Did Quikr Buy?

According to Quikr’s strategy, they wanted to create industry-leading verticals for its key segments.

For them, time was the most expensive thing, and hence, had opted for inorganic growth to scale its real estate division since the very beginning. Quikr was aggressively looking for acquisitions for their newly launched QuikrHomes, and had doubled its focus as well.

Other than that, they had also made a strategic investment in A N Virtual Tech, which is known to be the only company in India that has detailed real life imagery of 90%+ streets and buildings across India’s top 50 cities.

They had even tried their hands with Housing.com, but for unknown reasons, their talks fell through quickly.

Therefore, when this deal was pointed out to them by Tiger Global, it became evident that, this merger will not only create a strong industry leader, but a collective synergy will be a win-win for all – consumers, property developers, as well as our real estate partners. The combined force of these two entities will only help to create a stronger competitor in the sector.

It was a deal which would not only accelerate the growth of QuikrHomes, but would also benefit their other verticals as well.

Apart from boosting Quikr’s sales, this deal made more sense to them because, it would only make it easier for the combined entity to raise money, given the fact that, the investors have become cautious about the online real estate sector and Indian start-ups in general.

What Is Happening To The Real Estate Market, And How Will The Merger Affect The Industry Rivals?

To begin with – a start-up market ecosystem is considered to be on the path of maturity when there are ‘EXITS’. Simply because exits, be it – Mergers and Acquisitions (M&A) or IPOs give VCs a return on their investment, and using those funds, they can then invest in newer ventures.

Although, M&A’s are pouring in India, but tech IPOs have been rare, so far. All an observer has been seeing is sky-high valuations and mega funding rounds, not IPOs.

Talking about the real estate space in India – since the last two years, the segment has attracted more than $250 million (Rs.1600 crores) in investments by some of the biggest investors such as Helion Ventures, Nexus Venture Partners, SoftBank Group, Accel India, Horizen Ventures, Qualcomm Ventures and Nirvana Ventures.

Surprisingly, all of this has happened during a time when realty sales were the slowest in India.

But since the last one year, the real estate market in India has seen a slowdown, due to which supply has exceeded demand, and a whole lot of homes remain unsold in several major cities. This has not only affected the real estate agents and builders, but has also affected all other tech start-ups operating in this space as well.

And since weaker players are finding it harder to keep up, this trend has led, or rather forced the consolidation process in the online real estate space.

In the last year itself, we saw Housing.com acquiring a string of companies including Homebuy360, BigBHK, Indian Real Estate Forum, Plat, and Realty Business Intelligence. And all of this happened while Housing.com itself was struggling to manage its house after sacking of founder-CEO Rahul 800 other employees. As per media reports, it is also being said that Housing.com are also in talks with Snapdeal and News Corp for a stake sale.

PropTiger (which is part-owned by News Corp) has also recently acquired an older rival Makaan.com for an undisclosed amount too.

Therefore, with the current market being in the consolidation mode – there will be many opportunities for mergers & acquisition of the companies that are finding it difficult to move further.

Lastly and quite honestly, an industry consolidating into businesses consisting of larger players, is only more rational, healthier, creates more value, and gives room to breathe.