Like most of us already know, Quikr acts as a medium to connect the buyers & sellers of any given product, and is pretty much similar to Craigslist in the US. A portal that was launched with a vision of providing a platform to the buyers and sellers to “meet online, transact offline”, today holds more than 4.2 million listings and also has generated over 150 million replies.

Headquartered in the posh areas of south Mumbai, Quikr offers over 13 main categories and in 170 sub-categories including mobile phones, household goods, cars, real estate, jobs, services, education, etc. Additionally, it holds an actual presence in over 1,000 cities in India, and performs a large scale cross-category classifieds business amongst its more than 30 million consumers.

He recently got married to his lady love Tina Chulet, who coincidently is also the Founder of Waltzz – a mobile dating app! Together they live in their apartment in Bandra, Mumbai.

A Journey that led to Quikr.com!

Pranay was born in a small town of Rajasthan to a family where his father was a small time government officer working in mines as a general manager and his mother was a homemaker.

Most of his early childhood days were spent in the mining towns of Dariba, Zawar and Maton in Rajasthan. But his dream was to become an entrepreneur since day one!

He began his career, soon after he completed his graduation from IIM-C! Very few are aware that Procter & Gamble was his first job. He had joined in as a brand management executive. But this stint didn’t go on for long and he quit in 1997 itself.

In the same year, Pranay started working for Mitchell Madison Group as a Management Consultant / Engagement Manager. His basic job profile was to advice his clients in financial services and media industries.

He worked with the group for almost 3 years, after which in 2000, looking at the Dot Com boom in the environment, he started his first venture called – Reference Check. Interestingly, it was pretty much similar to his current venture Quikr. Reference Check was an online medium between Service Providers (Eg: Plumbers, Electrician, etc) and Consumers. The company eventually got merged with another bigger incubator called Walker Digital!

He went on to work with Walker for a brief period to built and stabilize the company, before he joined PricewaterhouseCoopers (Associate Partner) and then Booz Allen Hamilton (Principal) in 2002 & 2005, respectively.

His primary roles at both the companies were more or less, advising or consulting their clients from industries like Investment Banking, Media, etc.

After giving almost 5 years of his life, he even started another company of his own called – Excellere in 2007. Excellere was all about developing web-based educational products.

Although, for unknown reasons this venture of his didn’t function for more than a year, but during that phase what he saw back in India, changed his life forever. 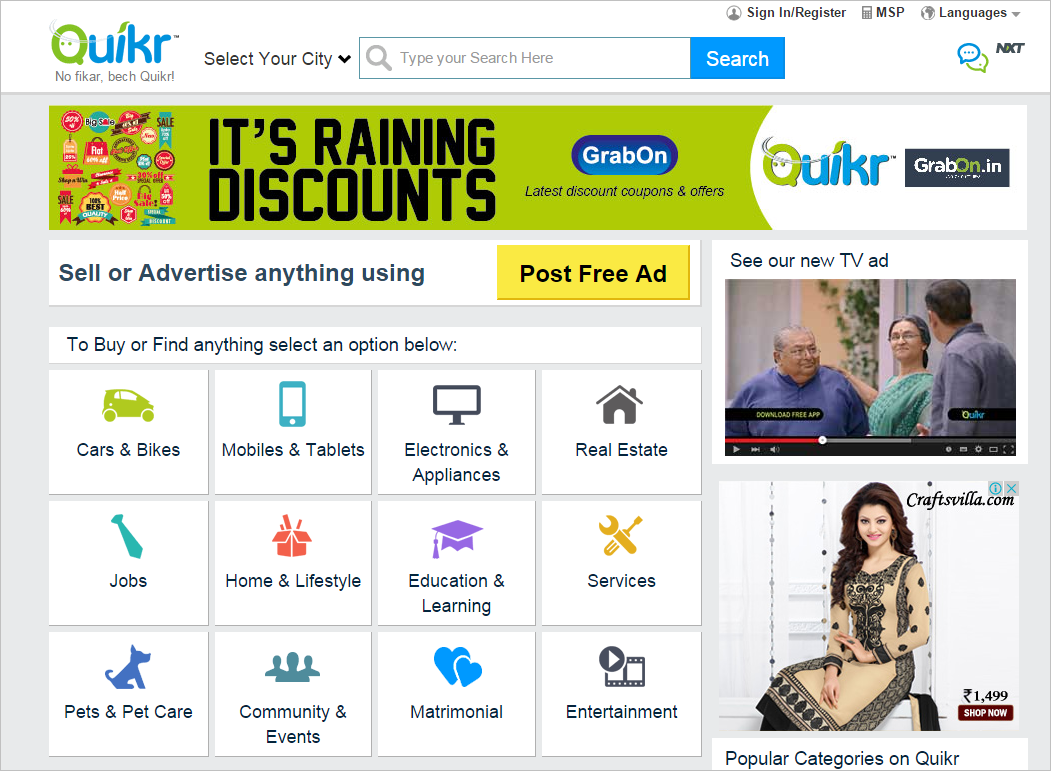 The story dates back to 2007! Pranay was living in New York and had turned into an experimental film-maker. He required a team for a film called ‘Latent Lava’— a video game made in the style of a feature film; basically, it used technology that allowed the viewer to play a game on live action footage, creating multiple film scenarios.

Anyway, he was able to recruit almost 60 actors, one producer and 30 crew members through Craigslist and that is when he realised that, Craigslist was a full-proof business model and didn’t have an existence in his home country.

As he got deep into ideation, Pranay saw that there were barely any solutions for the individuals to get a just price for anything they wanted, whether it was a used phone, furniture or a flat. He wanted to solve this problem for the masses.

Additionally, this was a business model that had proved its success across the world; be it, the U.S. or any other European country, or for that matter South America or China too. And even though print classifieds still had a stronger hold in the Indian market, online classifieds had the potential to out beat it, over the period of time. This boosted his confidence even more!

And while connecting the dots, he found the last piece of the puzzle. India is a country that still loves to touch and feel the product before buying it and a platform that he had in mind, would get the buyer and seller in touch, and would let them continue their transaction offline.

This would not online make his idea different from e-commerce sites like Amazon or Flipkart, but would also put it on the lines of classifieds.

Hence, in July 2008; Pranay officially launched Quikr.com, but as Kijiji.in!

Now in the initial phase Quikr was a subsidiary of eBay and Kijiji was Swahili word which meant ‘community’. Soon after the launch of the brand they realized that, the name was very difficult to pronounce and wasn’t adding to the brand too.

Hence, collectively they decided to create a new subsidiary, headed by Pranay Chulet & Jiby Thomas, and officially renamed it to Quikr. However, Jiby decided to quit Quikr in 2012 and started his own digital marketing venture called Webbutterjam.

Moving on! Quikr was born out of a simple yet unique idea – to craft a place where people in India can trade things from each other. But if you see, the world of classifieds also crossed paths with many players, from multiple avenues; basically, it directly or indirectly was in competition with multiple companies of several industries. But that did not scare Pranay!

He believed that a market with many players is very different from a market with noise. Anyone can start a website, but it not everyone has it them, to build a classifieds business.

In fact according to him, Quikr was very different, clearer and more bang on, than the most; because it offered more listings, more responses to listings, and a cleaner, simpler experience than others. And moreover, just like it name says – offered a quicker way for people to transact as compared to other marketplaces.

But the high-point of Quikr, unlike the rest was that, it had a definite revenue model in place. The company would make money from three verticals – premium listings, lead generation and advertising.

Apart from the many other things; what made unique the most was that – every city had a different Quikr. Udaipur, for instance, Jeeps were pretty famous here, so they had open Jeeps for sale, similarly, Punjab may have ploughs mounted on Royal Enfield bikes, Kolkata might have women entrepreneurs promoting home-made puchkas (panipuri), etc.

Basically, they segregated the portal very strategically, depending on the target audience. To add to that, Pranay made sure to spend most of their funds into marketing.

And they had a very simple yet innovative technique to track their P2P (People-2-People) sales as well. All they used to and still do is that; when people used to come to delete their ads, that time they used to ask them if they were able to sell their product.

With such a unique model (in respect to India), along with such innovative strategies, in all aspects, the growth and rise of the company was eminent!

In the next few years, not only did the company grow at the pace of fire, but also was now getting transformed into a generic brand in terms of classifieds. Some of the most prominent developments are mentioned below: –

Talking about the developments of 2015; Quikr with a strength of 1,200-1,300 people, now reports 15 lakh (1.5 million roughly) transactions every month, which are valued somewhere around $5 billion.

Today, the portal has a presence in 900 cities across India and addresses the needs of many across 12 categories & over 140 sub-categories which range from – Mobiles, services, cars, real estate, entertainment, jobs, furniture, electronics etc.

Quikr is also in the process of launching a new classifieds website for real estate called quikrhomes.com. This would allow B2C (Business 2 Customer) as well as C2C (Customer 2 Customer) discovery of properties. At the moment, Quikr has over 2 million listings in real estate, one-third out of which are for apartment rentals.

Quikr would also be launching new micro-sites under separate domain names like QuikrHomes, QuikrAuto, etc, to simply business for its users.