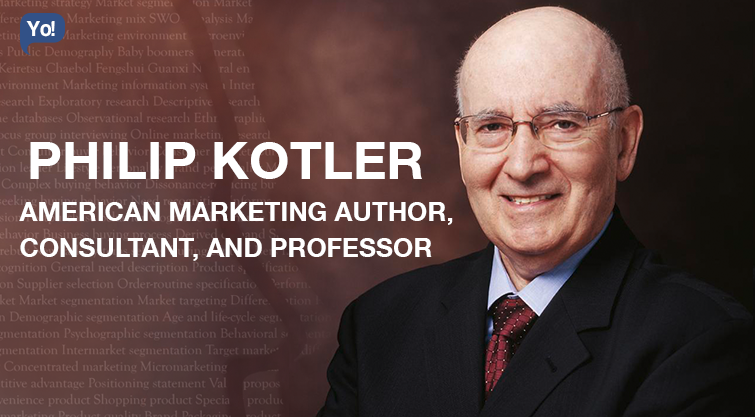 Born on the 27th of May 1931; the great Philip Kotler is a widely acclaimed and respected American author, Consultant, and Professor, and is globally known to be regarded as the ‘Father of Modern Marketing’.

At present, apart from being a consultant and an author; Philip also is the S. C. Johnson Distinguished Professor of International Marketing at the Kellogg School of Management, Northwestern University.

To add to that; he is again, one of the very few are most asked for and consulted by, by the business community. Professor Kotler has been at the giving end of consultation for some of most prestigious companies of the world such as IBM, General Electric, AT&T, Honeywell, Bank of America, Merck, etc.

Another overwhelming piece of information about Philip also remains that, the ‘World Marketing Summit‘, and the ‘World’s first Museum of Marketing’ (3.0) have been founded by this great man himself. The summit is known for holding annual conferences, and finding ways for the betterment of human conditions and the quality of life; whereas, due to his contribution in Indonesia, the Indonesian government has made a postage stamp of him, making him the first marketer to appear anywhere on a postage stamp.

From Past To The Present

A Glimpse Into The Life Of Philip Kotler!

Philip belonged to family who had emigrated from Ukraine to Chicago in the year 1917. He began his studies at the DePaul University which continued for the next two years, after which he was accepted into the Master’s program in Economics at the University of Chicago in 1950 but what was unusual was that, he was accepted without a bachelor’s degree.

What was even more interesting was that, he got the opportunity to study under three Nobel Laureates in Economic Science: Milton Friedman, Paul Samuelson, and Robert Solow.

After completing his Masters in 1953, Philip joined the Massachusetts Institute of Technology to pursue his PhD in Economics & Social Science.

Other than that, what many aren’t aware is, Philip had also done a year of postdoctoral work in mathematics at Harvard University and also in behavioural science at the University of Chicago.

Anyways, after completing his studies, Professor Kotler joined Kellogg School of Management, Northwestern University as the Professor of International Marketing. Since then i.e. 1962, and till date he has trained some of the most brilliant mind of the century. 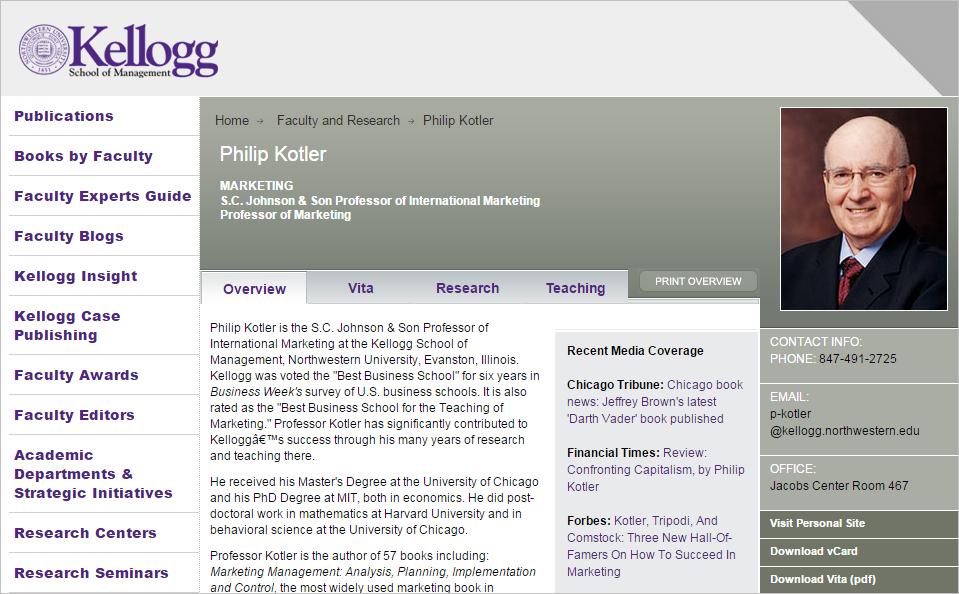 While at it, Professor also turned into a speaker in 1965 and started giving lectures on Economics and Marketing in various countries of Europe & Asia. Other than marketing, Professor is also less well-known for being a Nobel Laureate trained classical economist. His tutors included Milton Friedman and Paul Samuelson, who have trained him with the strengths and weaknesses of modern economic theory.

He has also travelled many countries within Europe, Asia and South America advising and lecturing various companies about how to apply sound economic and marketing science principles to increase their chances of winning.

To add to that, he has also acted as an adviser to various governments several times on how to successfully develop and position the skill sets and resources of their companies for global competition.

During the same time, in an attempt to spread his knowledge globally, professor also decided to try hand at Writing 1967. So far he has managed to pen down 55 books, with the recent one being Capitalism.

As an author, he not only managed to pen down some of world’s best selling Marketing books, but being so accurate his books have also successfully become a part the business or marketing learning process.

With the changing times, Professor also decided to lay down a corporate structure around his knowledge. To do so, he started Kotler Marketing Group in 2001, in the US & China to provide services like marketing consultation, marketing training, marketing research, etc. But he wasn’t the one who managed the whole show; professor only acted as an External Consultant and also looked after his other responsibilities of Authorship, Speaking & Teaching.

The group under Professor’s guidance has successfully managed to break the barriers of time & competition and has emerged as the true leader of today’s times. 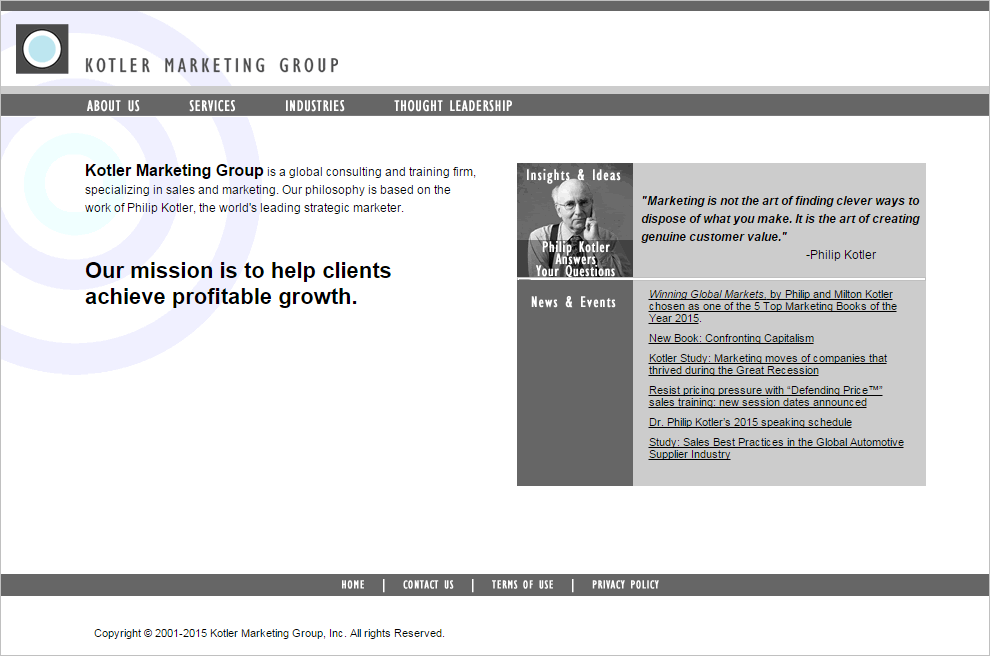 Philip Kotler – As It Is!

Professor now is widely known considered to be “The Marketing Guru” and “The Most Influential Marketer of All Time.”

Professor Kotler’s life is a summarization of three Key professional aspects – S.C. Johnson & Son Distinguished Professor of International Marketing at the Kellogg School of Management at Northwestern University, Author of Marketing Management which is now in its 14th edition and ‘Kotler Marketing Group’.

Views About Marketing – From Its Father

Professor started his career by teaching marketing at the Kellogg School of Management, because he believed that marketing played held huge importance in driving the economics of an organization. He saw that demand was highly influenced not only by price, but also by other factors like advertising, sales, promotions, direct mail, and various other institutional factors like agents, retailers, wholesalers, etc., operating as distribution channels.

To summarise what is mentioned on Wikipedia, Kotler firmly states and also believes that:

“Any organization while marketing itself must keep in mind that; its primary task is to understand the needs, wants and / or interests of their target audience and in return they must diligently fulfil the expectations of their customers, in order to win the customer & its loyalty, to keep their competitive advantage and to stay successful”.

In other words, to simplify it even more; all he tries to say is that any company’s profit is directly or indirectly linked to their customer’s well-being and satisfactions. Hence, a company or an organization must function in a manner where they are working towards those factors, on a broader scare. 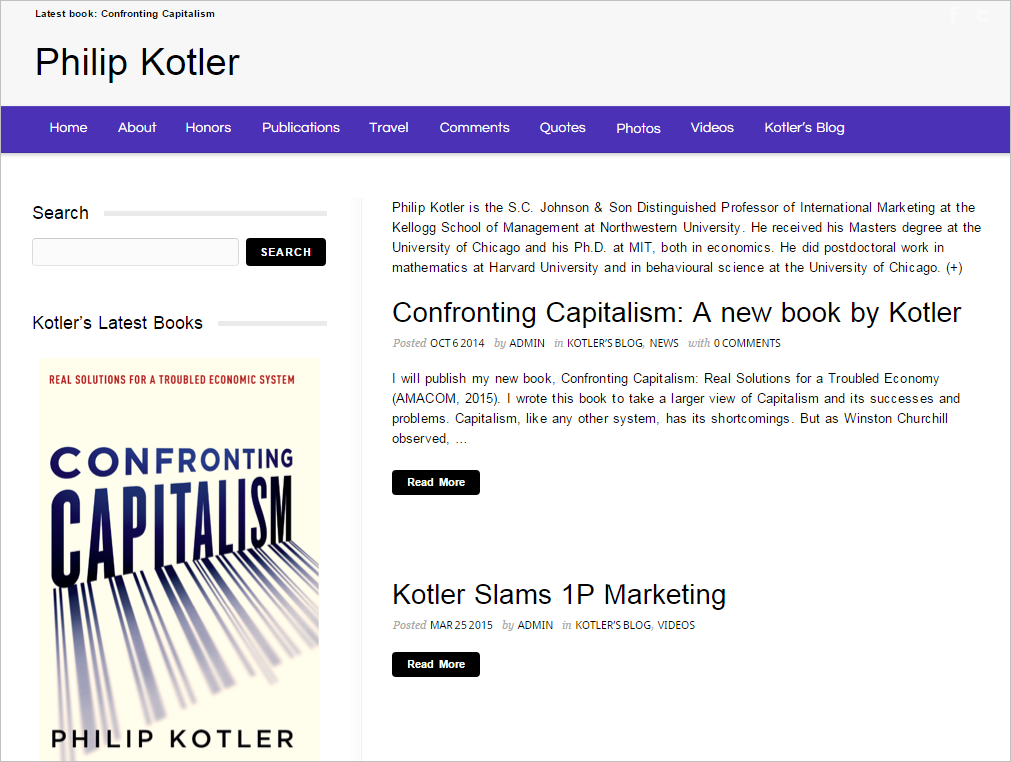 One of the biggest contributions of professor to the field of marketing was popularizing the idea of the Marketing Mix, which he likes to call the Four P’s of Marketing, which basically stand for ‘Product’, ‘Price’, ‘Place’ (i.e., distribution) and ‘Promotion’ (i.e., advertising).

These when collectively manipulated, hold the potential to influence the buyer’s response”. These four variables help a company develop a unique selling point as well as a brand image.

Now we all know that with the entrance and advancement of technology & internet (social media, e-commerce and digital marketing), the ‘Marketing Mix’ might or might not be applicable.

Yet, professor firmly stands by his methods, and still believes that the Four Ps model of marketing is still king.

To explain his point; professor says that, his Marketing Management book currently is in its 14th edition and since the inception of marketing till date, as the technology, consumers, time has evolved, so has the ways, standards and techniques of using the four Ps evolved as well and they change from industry, sector, purpose, to product.

As a matter of fact, he believes that marketing in the present phase has a far more better and higher standing in the corporate structure than earlier.

Some Words Of Wisdom From – Philip Kotler!

In 2005, Professor ranked 4th Most Influential Business Writers/Management Gurus in a survey conducted amongst 1,000 executives in 25 countries by The Financial Times. The first three were Peter Drucker, Bill Gates, and Jack Welch.

Like we earlier mentioned, Professor is the Author of more than 55 marketing books, which include “Principles of Marketing”, “Kotler on Marketing: How to Create, Win, and Dominate Markets” and “Marketing 3.0: From Products to Customers to the Human Spirit.”

His first book “Marketing Management: Analysis, Planning, and Control”, which is now in its 14th edition is one of world’s most used textbook in business schools.

Other than that; professor is the author and co-author of more than 150 published articles, and furthermore, Professor has also written 50 other books on various subjects like corporate social responsibility, education, environment, government marketing, healthcare, hospitality, innovation, place marketing, poverty alleviation, religious institutions, etc.

His latest book – Capitalism: Real Solutions for a Troubled Economic System in 2015, which although has been highly successful, but has also managed to raise a lot of eyebrows of critics. But nevertheless, the book makes perfect sense and has been appreciated by all as well.