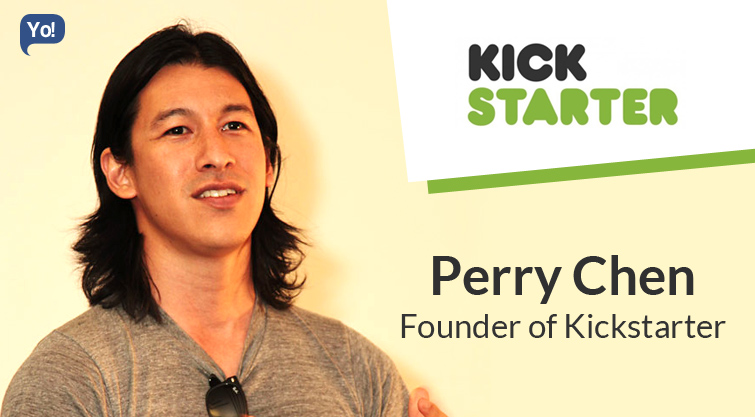 Kickstarter was founded by Perry Chen, Yancey Strickler and Charles Adler in 2008. A company of 136 employees, kickstarter includes a wide diversification of developers, designers, support specialists, writers, musicians, painters, poets, gamers, robot-builders, etc., working with them to run the show, many of whom have either backed (34,000+) projects or have launched quite a few of their own.

Perry Chen is a New York City-based artist and currently acts as the Chairman of Kickstarter.

An alumnus of Hunter College High School in New York City; most of his growing years were spent in New York City and New Orleans, where he worked on music. Prior to kickstarter, Perry had co-founded Southfirst gallery in New York in 2001.

The idea of kickstarter was initiated by Perry and he had also served as Kickstarter’s CEO till 2013, post which, he passed on the baton to Yancey. 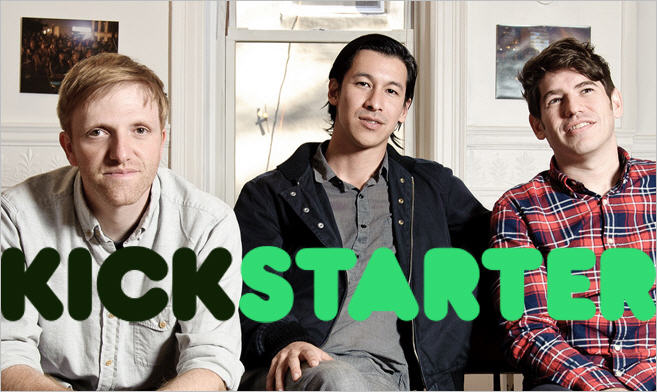 Yancey who grew up on a farm in the Appalachian foothills, is two years younger than Perry. Initially, he had come to New York to try to make it as a freelance music writer, eventually ended up starting his career as a Music Journalist and Editor In Chief for eMusic in 2005, and went on to continue it for the next 4 years as well.

His writings had also appeared in some of the most prestigious publications including – The Village Voice, New York magazine, Pitchfork, and many others.

Lastly, talking about Charles Adler – the third cofounder of Kickstarter, he is not a part of the firm anymore. He currently acts as an Advisor to the firm. Before stepping down in 2013, he was the Head of Design at Kickstarter.

A Mechanical Engineer from the Purdue University – Charles had started his career with Agency.com in 1995 as a Designer & Site Builder, then Senior Information Architect and lastly, as an Account Director / Senior Strategist with them.

Post that, he had also co-founded two ventures – Source-ID (interaction design studio) as well as Subsystence (the online art publication).

Based in New York and launched in 2009 – Kickstarter is a public-benefit corporation that has built a global crowdfunding platform with a focus on creativity.

Simply put – Kickstarter is a global crowdfunding platform or community that is built around creativity and creative projects, which connects creators with backers, to bring a project (idea) with a clear goal, to life.

Primarily, apart from kickstarter, there are two other characters in this story – Creators (a person or a team that is the brain behind the project) and Backers (People like you and me, who pledge money to help the creators).

The projects created by Creators are separated into 13 categories and 36 subcategories, which include: Art, Comics, Dance, Design, Fashion, Film and Video, Food, Games, Music, Photography, Publishing, Technology and Theatre.

As per their stats, Film & Video and Music are the largest categories and have raised the most amount of money as well. These along with Games, account for over half the money raised.

Everything on Kickstarter must be a project. A project with a clear goal, post which, something must be produced by it (For example: making a watch, creating a printer, or a work of art).

Now although, Kickstarter is open to Backers all over the world, but there are boundary limitations for Creators. Project creation is currently available to individuals in the US, UK, Canada, Australia, New Zealand, the Netherlands, Denmark, Ireland, Norway, Sweden, Germany, France, Spain, Italy, Austria, Belgium, Switzerland, and Luxembourg who meet their requirements.

Kickstarter does not allow projects to raise funds for charity, offer financial incentives, equity, or to solicit loans. The people who back a project are people like you and me. The backing can be anything as small as $5 (depending on the project), and is not done, in against for equity or stake in their company.

Let’s give you in-depth understanding about kickstarter….

How does Kickstarter work?

To begin with – all the projects are created by the people who own it, who also hold complete control and responsibility over it as well.

These projects have individual pages allotted to them, which contain all the information about the product, videos, founders, pledge details, rewards that would be offered to the backers, etc., which ideally take weeks in preparation. One may find a project funding goal and deadline for every project, which is set by the creators themselves.

If people like the project, they can pledge money to put it to action. Only after a project is successful in reaching their funding goal, the backers are charged, that too, after the deadline ends. Otherwise, no one is charged. Funding on Kickstarter is all-or-nothing!

Why do people back projects and where do these backers come from? Do backers get ownership or equity?

Most of these backers are friends, family or references, while the rest are the ones who back the project to support it. They are just inspired by a new idea, or by the project’s rewards, which could be a copy of what’s being made, a limited edition, or a custom experience related to the project.

Online media (social and otherwise) such as Blogs, Press, Facebook, Twitter, and Kickstarter itself also greatly help to drive traffic and pledges.

Talking about “what’s in it for the backers” – although, project creators keep 100% ownership of their work, backers get specially designed rewards in return.

How to validate the authenticity of the project creator?

To begin with – you can find all the relevant background information about the creator, under the ‘creator bio’ section of all the projects, which also includes all the additional resources, links to websites, social media accounts, etc. You should also thoroughly go through the project information to get a better sense of the person or team behind the project as well.

Also, for all the projects that have been launched post 19th May 2014, you’ll also find a verified name with a check mark next to it.

And if you still have more questions, you can always send the creator a message!

Other than that, back the projects of the people who you already or have been referred by a trusted source.

What is Kickstarter Revenue Model? What does it do to protect its community?

If a project is successfully funded, Kickstarter gets a 5% fee from the creators. This is applicable only if the project reaches their funding goal, otherwise, there are no fees.

They have also partnered with a third-party payments partner called – ‘Stripe‘ to process all their payments or pledges.

Talking about the protection – firstly, it is important to note that this platform functions on an ‘all-or-nothing’ funding model. So the backers have enough time to fully evaluate a project.

Kickstarter has setup dedicated Integrity teams to strictly monitor the system for suspicious activity. This team also screens reports that are sent to them by the community, after which, an appropriate action is taken, if something is found that does not align with their rules.

Other than that, you can also visit their Trust & Safety page, for more information about their security procedure.

How to start a project?

Kickstarter (earlier known as Kickstartr) was the brainchild of Perry Chen. The story dates back to 2001…!

This was when he used to live in New Orleans. He wanted to bring a pair of DJs to play in their town, but had to drop the idea because the costs had gone way beyond his budget.

What he noticed in this whole incident was the fact that – the potential audience had no say in this decision!

This gave him the brilliant business idea of Kickstarter!

As much as, he loved the idea, but he was focusing on making music, and not starting an internet company. Over the next few years, the idea still kept evolving in his head.

After much thought, he finally decided to move to New York City in 2005, because it would be much more feasible there.

Around the same time, he also became friends with Yancey and together, they began with the brainstorming. After gaining answers to all the – What, Who, How and Where, they decided to move to the next step!

By now they had a rough design of the site ready with them, and Perry had also borrowed some money from his friends as well. About a year later, Charles also joined the team, and began helping them to find a coder.

After many failed attempts at hiring, in 2008, they finally found a few developers, and by 2009, the site was all set and ready.

On 18th of April 2009, Kickstarter was launched publically! 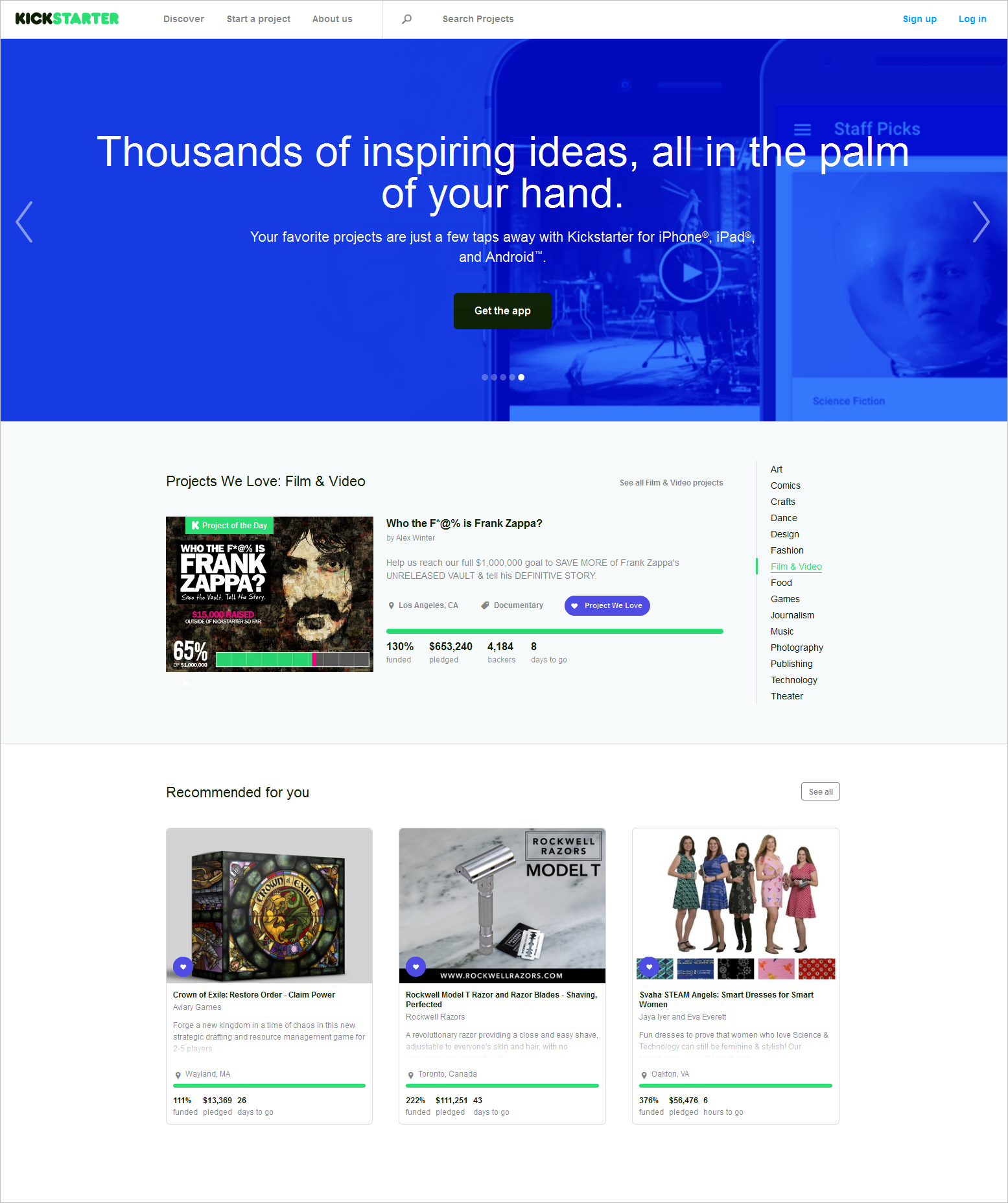 They began spreading the word amongst their circles, and Charles, even announced it on his blog Waxy.org, as well.

In no time, inquiries began coming in as well. The most satisfying moment for them was when; a young singer-songwriter launched a project to fund her album and managed to get funded in one day.

In just nine months since their launch, they also had their own office space and two new teammates as well.

According to the founders; the most memorable and interesting day for kickstarter was the 9th of February 2012, because it saw a number of milestones being set. On this day, kickstarter received its first project which managed to exceed one million dollars in pledges. To top that, a few hours later, another project managed to reach the same figure in less than 24 hours timeframe. This was the first time Kickstarter helped raise more than a million dollars in pledges in a single day.

By the end of this year, Kickstarter also expanded its reach and opened its doors to projects based in the United Kingdom. This was followed by projects in Canada, Australia, New Zealand, Denmark, Ireland, Norway, Sweden, Spain and so on… in the years to come!

In 2013 – Perry stepped down from the position of the CEO and moved on to become the Chairman. He was replaced by Yancey Strickler. What was even more shocking was that, Charles Adler resigned from an active role in the company for unknown reasons, and moved back to Chicago. He now acts as an Adviser to the company.

The year of 2014 saw a company raising $13.28 million pledges, which become the most funded Kickstarter project in history, breaking the record of Pebble smart watch (an idea that was rejected by institutional investors).

Later, since they had built Kickstarter to help bring creative projects to life, the company also transformed itself from a Private Corporation into a Benefit Corporation, which although, are for-profit companies, but are obligated to keep in mind the impact of their decisions on society, and not just shareholders.

And when we look at them today, Kickstarter has grown on to reach to have more than 10 Million projects with $2.3 Billion pledges.

So far, they have only raised a total of $10 Million (March 2011) from 19 investors including – Abundance Partners, Betaworks, Caterina Fake, Chris Dixon, Chris Kaskie, Chris Sacca, Craig Shapiro, Dan Rosensweig, and the others.

The company has personally also made a few investments in Descendent Studios ($600k in April 2015) and Run An Empire ($100k in December 2014). More recently, they have also acquired DRIP as well.