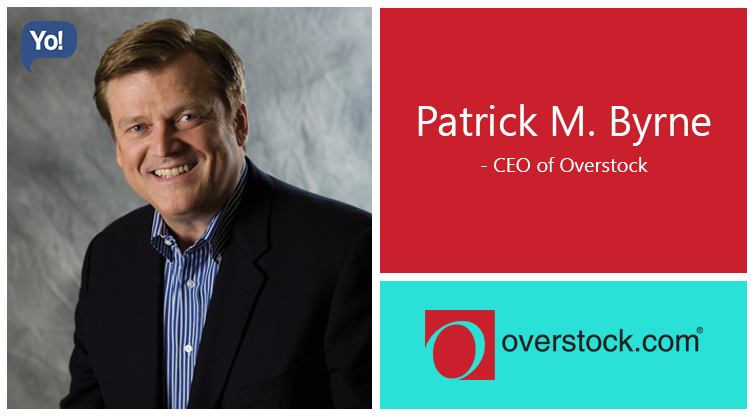 Born in 1962 – Patrick M. Byrne is the CEO of most trustworthy online venture – OverStock.com.

Since the time Patrick has taken over Overstock.com in 1999, he has been the centre of attraction amongst almost all the media outlets including the Wall Street Journal, ABC News, Fortune, CBS Marketwatch, BusinessWeek, etc….

He has also managed to receive a range of awards some of which include – “25 most influential people in e-Business in 2002 by BusinessWeek”, “2002 Milestone Award Winner Utah Region by Ernst & Young”, the first-ever “Best of State Awards for Community Development in 2003 by Utah State”, and many more like these….

What is a lesser known fact is that, he is a Three-time Cancer Survivor, and has ridden a bicycle across the country to increase the awareness about the disease and also to raise money for Cancer Research at the Dana Farber Cancer Institute as well.

Patrick also serves as a Co-chair along with Rose Friedman for ‘The Friedman Foundation’ for Educational Choice. This is a non-profit organization that was founded by Milton and Rose Friedman, which widely promotes school vouchers and other forms of school choice.

Talking about his qualifications – the highly qualified Patrick, has completed his Bachelor of Arts degree in Chinese studies from Dartmouth College. Post that, he also went on to pursue his Master’s Degree from the Cambridge University as a Marshall Scholar, and then a Ph.D. from Stanford University in Philosophy. Additionally, he also holds a certificate from the Beijing Normal University as well.

Patrick also has a ‘Black Belt in Tae Kwon Do’, and had once pursued a career in professional boxing as well.

How Was Life Before Overstock.Com?

As Patrick likes to put it – during his early days in the professional world, he was one of those people who were a part of some small ventures and while they also pursued their full-time career as an academic. This went on until the gap between the two worlds grew too large.

So he began as a teaching fellow at Stanford University from 1989 to 1991. Later, he joined Blackhawk Investment Co. and Elissar, Inc as their Manager. At that time, he used to lead a group of investors into buying small manufacturing companies in New Hampshire.

In 1994, he helped these investors buy Centricut LLC, a manufacturer of industrial torches. But shortly after the purchase, the CEO had to retire suddenly, due to which Patrick had to step into the position. He entered into the entrepreneurial world with an intention that he wouldn’t have to stay put for more than 6 months.

But fate had something else in mind. He went on to continue for more than three years with the company.

Later in 1997, Warren Buffett, who was a great teacher to him and an old family friend, asked him to work for him running a group of apparel manufacturing companies. Fechheimer Brothers Inc. was a Berkshire Hathaway company that manufactured police, firefighter, and military uniforms.

This turned out to be a two-month assignment, post which, he decided to take a retirement from the business world, and went back to teaching. He went to Dartmouth and took a group of students to China for a semester.

This is when it all began!

What Is Overstock.Com And What Is Their Business Model & Strategies?

Launched in 1999 and headquartered near Salt Lake City in Utah, Overstock.com Inc is an American online retailer that sells a broad range of products like – furniture, rugs, bedding, electronics, clothing, and jewellery, etc at very low prices.

To give you a gist – OverStock initially had begun by selling left-over and returned merchandise on their online eCommerce marketplace. These were the inventories of around 18 failed dot-com companies that they had purchased at below-wholesale prices, but over the period of time, OverStock expanded to sell new merchandise as well.

So they started OverStock by conducting its sales in two different ways. The first was ‘Direct resale’ wherein they used to acquire excessive inventory through various mediums and then used to sell them on their platform, and the second method was ‘Indirect resale’ wherein they used to sell excessive inventory stock on behalf of other retailers. Later, the company also began offering online auctions on its website as well.

Other than that, OverStock also started a division under their presently functioning model called Worldstock, wherein the company used to search for artisans or manufacturers throughout villages all over the world but mostly in developing nations specifically, for the company. These products are then directly sold on the website. 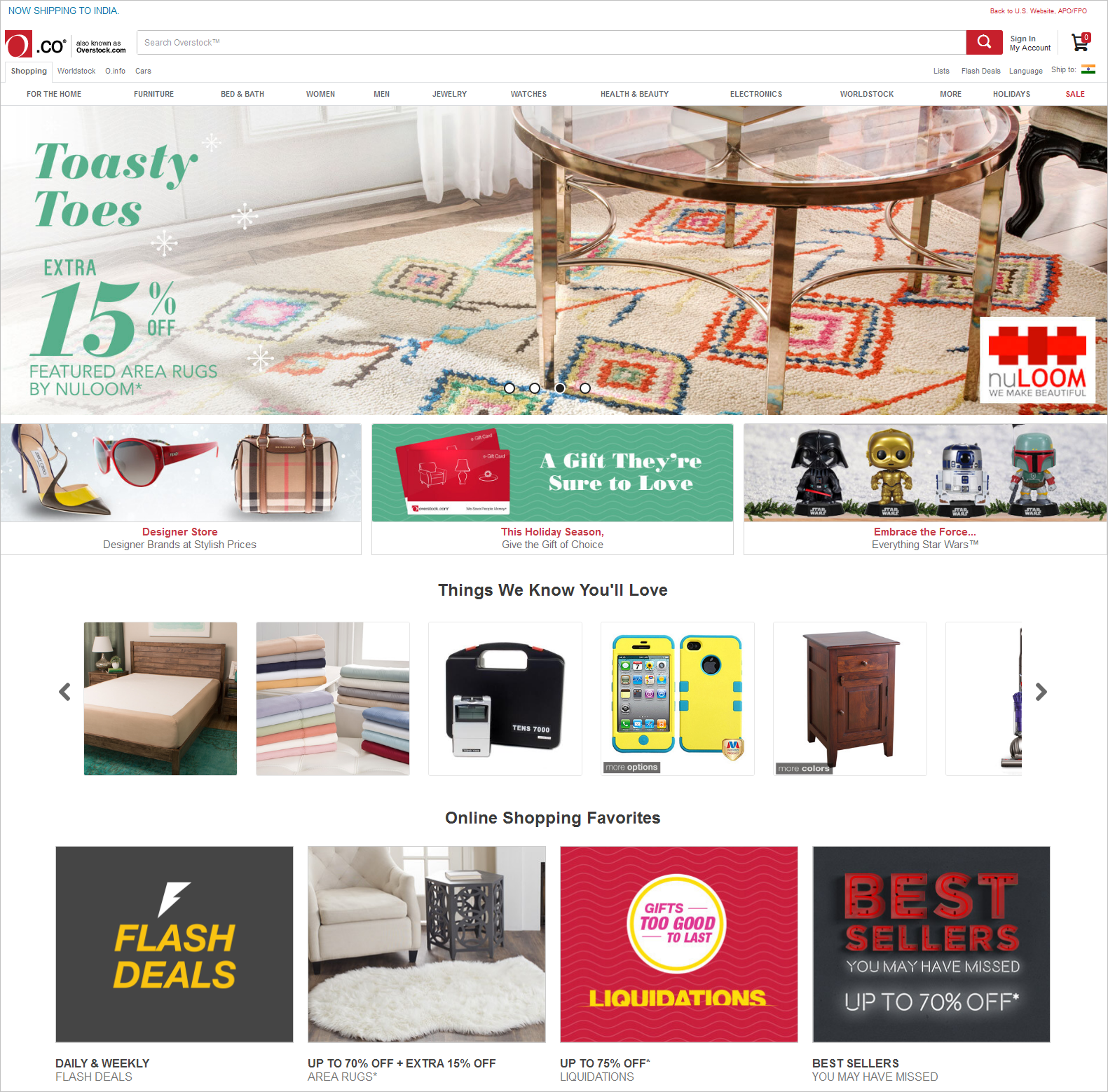 Talking about their marketing – they initially used to rely solely on word-of-mouth marketing for quite some time. It was only after they reached to a stage where it had become highly important to use more concrete methods, is when the company turned to distinctive television advertisements starring different actors.

Overstock.com also started an ‘affiliate program’ wherein it pays commissions to people who refer business to the company.

What Is The Story Of Overstock And How Has Their Growth Been So Far?

So in 1999, the founder of ‘D2-Discounts Direct’ had approached Patrick to ask for operating capital.

Their idea was pretty simple, yet unique! All the cancelled orders, or missed deliveries of products, or in case of any other such event, the goods become available at extremely cheap rates.

Now in the retail industry, there something called as “jobbing”, that not many are aware of.

What these jobbers do is, they operate in that market, and they bring all these products into the flea market industry. At that time, there were about 60,000 people making a living by selling at flea markets.

And D2-Discounts Direct acted as their main supplier. They worked on a fax broadcast method, wherein they would sign up with all the businesses in the flea market industry, post which, they would fax product sheets on a weekly basis.

These faxes contained all the current product offerings, which these jobbers would buy-off and then resell the products at a flea market. Basically, they acted as a centre-point between the Jobbers and the companies giving away these products.

Anyway, moving on! This company was relatively new in the market and had generated something around $500,000 in revenues.

Patrick found the idea really interesting and decided to invest $7 Mn in the company, in against for 60% equity stake. What was even more interesting was that, he invested on the day the company decided to shut down.

He took the help of his students to work over different concepts, and by October 1999, he took over the functioning of the company as its new CEO, post which, he also renamed it to Overstock.com.

He remodelled the business to an online flea market and began with less 100 products which were very cheap, and were either novelties or products less than $100. Watches, home goods, furniture, etc! Within the first few months, OverStock did revenues between $700,000 to about $1 million.

Around the same time, OverStock also made a deal with Safeway (similar to Wall-Mart). The deal was that OverStock would help find and buy products for them which they could then display in their stores.

During the time when the dot-com bust happened, there were a whole bunch of companies that had gone out of business, and capitalizing on this, OverStock went all out to do bankruptcy deals and purchased their inventory as well.

Around the same time, Patrick had gone on a vacation to Southeast Asia. There, he saw that many village artisans were held back by the lack of proper retail channels or various other issues. He could see that, the OverStock model would be just perfect for them.

Hence, when he returned back, he decided to set up the ‘Worldstock’ division of Overstock. 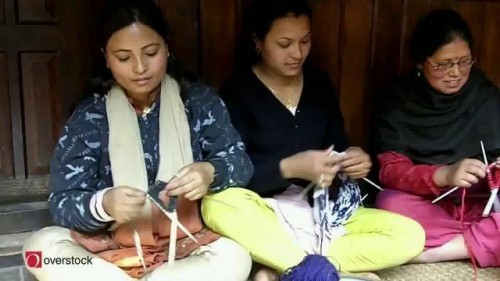 Worldstock was basically a division which searched through villages all over the world for people capable of producing quality products to provide these artisans of the world’s poorest regions, with opportunities to display and sell their creations to a wider audience. Patrick’s idea was to help create jobs for tens of thousands of people throughout the world.

And help them even further; OverStock gave 60-70% of the sale price to artisans, while the amount that OverStock earned was used for funding philanthropic projects.

Coming to the money part, the times were difficult, post the dot-com burst, and they were turned down by 55 venture capitalists as well. So to keep the show go on, Patrick decided to go all out, and he, along with the help from family and friends, they funded the project. Over the period of time, collectively, they invested $30 million.

In 2002, OverStock went public! And since then things started to turn green for them.

Post the IPO, Overstock began to earn a name for itself as a trusted e-retailer, and bigger brands like HP, Kenneth Cole, Samsonite, etc., also started to utilize their services for commission-based indirect reselling. Overstock called it ‘Fulfilment Partner Revenue’.

Now during the early days, the company had adopted for a subtler method to promote themselves. They used to rely on word of mouth of satisfied customers, and online advertisements. They had deals with MSN, Yahoo!, AOL, etc and used to spend 100% of their advertising revenue on ‘Online Display Marketing’ and ‘Email Marketing’. They were also the first ones to try out search marketing. But they weren’t doing much of branding.

But post the IPO, Patrick realised that it was time to create a brand and go main stream. Hence, in 2003, OverStock started with television, radio, and print advertisements as well.

And goes without saying, this led to an upsurge in Overstock’s profits.

In January 2014, Overstock.com has also started accepting Bitcoin (a type of digital currency which has no physical existence) as payments for their goods. They have also become the first major retailer to do so. On the first day, they made sales worth $126,000 in Bitcoin, which was a 4.33% increase in their daily sales from their normal income of $3 million per day.

More recently in August 2015, Overstock.com Inc also acquired ‘SpeedRoute LLC’ – a brokerage firm or a broker-dealer, which buys and sells stocks, bonds, mutual funds, and other investment products on behalf of its customers. SpeedRoute was purchased for approximately $30.3 million.

And lastly, today OverStock which started with nothing has reached to point where it accounts for 1,000,000+ products on the site which helps them to earn revenues worth more than $1.5 Billion (FY 2014), and has also become a company with a 1500 member company.