Patanjali changing the Advertising game! Brings out the swadeshi card. 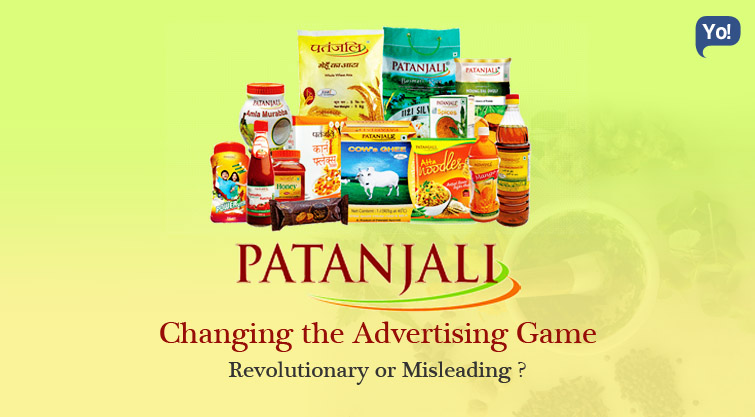 About 10 years ago, during general chit chat with a group of farmers from a village near Haridwar, Baba learnt that they wanted to sell their amla (gooseberry) trees because they made no money.

Baba Ramdev offered to buy all of them and started producing and bottling amla juice under the brand name of Patanjali. He used to take it to his yoga camps, and to all his millions of followers.

One thing led to another, and in no time, they were now distributing other products such as: nutrition supplements, toothpaste, hair oil, shampoo, soap, cookies, and even noodles.

They are aiming to close the current fiscal with a turnover of $ 1.5 Bn (₹10,000 crores), which would effectively take them past two decades-old companies – Nestle and Procter & Gamble, leaving Patanjali second only to Unilever in India; and all that in just about 10 years.

This is the story of Patanjali, in short!

Having said that – this unprecedented growth of the company begs us to question the reasons behind the company’s success?

What are the Advertising and Positioning Strategies of Patanjali that led to their success?

Well, to begin with – Patanjali owes its fortunes to Baba Ramdev! Designation-wise, he is neither a chairman, nor a shareholder or a director; a nobody in Patanjali. But in actuality, he is everything!

He has not left any opportunity to promote the products of Patanjali at his camps, on television channels, and everywhere else he could, using the plank of health benefits, often with a dash of Swadeshi crusade.

What makes Patanjali a credible threat is that it is not trying to defect other FMCG companies at their game; but instead, it has changed the game for them!

Unlike their competitors — Colgate, Procter and Gamble, Unilever, etc., who sell several brands under different brand names; thus, alienating the consumer from the parent brand — Patanjali sells all its products one Brand name, giving relatability to the Patanjali. They are using a single brand strategy!

Aside that – Patanjali has grown because of three distinct reasons: -

To put the aforementioned into context: since the Indian market still has an inclination towards culturally rooted products; the products that Patanjali manufactures are marketed as historically and culturally local products.

They have positioned themselves in the minds of the Indian consumer as a brand that is extremely “Indian”. In addition, they also advertise their products to be all-natural and do not have any synthetic ingredients.

Their new advertising campaign compares its multinational rivals to the East India Company during the British Rule in India.

The print ad read that – “though we got political freedom 70 years back, economic freedom is still a dream. The way East India Company enslaved and looted us, multinational companies are still doing the same by selling soap, shampoo, toothpaste, cream, powder and similar daily items at exorbitant price.”

In the commercial – Baba Ramdev has depicted the Holy Cross of Christian faith, while referring to the East India Company, and called upon Indians to boycott all foreign products.

Patanjali had been broadcasting these messages through all leading radio stations, newspapers and television networks, and was even particular about the placement of its TV spots, which run for long hours during prime time and are only telecasted during shows which are not foreign, vulgar and / or violent.

The campaign was telecasted 21,923 times during the first week of August, making it the biggest television advertiser, according to data on the Broadcast Audience Research Council (BARC) India website.

He basically, pitched MNCs as `thieves’ and himself as Swadeshi. These ad campaigns are injecting a sense of nationalism in the consumers!

This is where the ‘underdog’ card is being played so well. They are successfully developing a strong sense of association between consumers and this “National underdog” that is fighting against the ‘foreign’ brands owned by their ‘former oppressors’. Their association is getting so strong that consumers are cheering for Patanjali just as they cheer on the Indian cricket team.

And now add to all this, the perception that Patanjali stands for ‘Purity and Health’! The mixture brings out a viral brand.

Is it wrong? Or is it right?

That’s just a matter of perception!

But is Patanjali trying to be like MNCs or propagating Ayurveda?

Well to begin with, goes without saying that – there no longer a question of whether Patanjali will challenge large listed companies; they already are!

What still remains unanswered is that which ones will be affected now, and how seriously?

Many who have tried Patanjali soaps, toothpastes, shampoos, ghee, honey and a host of daily-use products, have not gone back to regular MNC brands. Their millions of consumers have blind trust on Patanjali’s product quality and pricing.

But if you try matching their statements with actions, things get rather confusing! They say that their goal is to propagate Ayurveda, but in reality, Patanjali is having a fierce competition with the MNC’s.

Their success is largely due to Baba Ramdev’s successful projection of Patanjali as an exact opposite to ‘foreign’ brands, and as a ‘Nationalist underdog’. They have been aggressively marketing to project Patanjali as superior and ‘foreign’ competitors as inferior.

Take for example: their recent fruit juice advertisement, it says – “your shops as well as your hearts” and “together we can turn the SWADESHI dream of Mahatma Gandhi, Bhagat Singh and Ram Prasad Bismil into a reality.”

If Patanjali’s aims are to target the pure and healthy food segment that incorporates the benefits of Ayurvedic herbs and medicines; then great! But turns out – they aren’t doing anything different, and selling the same thing, with packaging similar to that of MNC’s like Dabur.

And, what in the world is so ‘Ayurvedic’ about noodles, cornflakes and biscuits, which are manufactured just like every other MNC. All that is different between the two is Patanjali has ‘whole wheat’ to offer as the health proposition!

Then there are those adverts about products such as: Patanjali Kesh Kanti Natural Hair Cleanser and Oil, Patanjali Kachi Ghani Mustard Oil, Patanjali Herbal Washing Powder, Cake and Dishwash Bar, etc., that have complaints on them as well.

Having said that – we are not here to bash Patanjali!

Undoubtedly, Patanjali has successfully managed to disrupt the Indian market and is giving several MNC’s a run for their money. With their arsenal of 500+ products, Patanjali is said to be a direct threat to a wide range of giants from P&G, Colgate and Unilever to Nestlé Rickett Benkiser, Dabur, Emami, Marico, Godrej and many others.

As a convert to Patanjali products (like the many millions), if swadeshi is your propagation then, rather than imitating MNC biscuit brands like Marie, and Monaco, we would rather see Patanjali making products which are nutritious and hygienically produced Indian foods that discard all the high sugar and sodium content in it, along with all the chemicals that are used that give the slick look and tempting feel to mass-produced food. That would really be about “taking Indians back to their roots!

And on the other end, it would be highly appreciated, if they use some non-MNC advertising strategies to promote their products. Let your product speak for you; rather than the other way around!

What are the contributions made by the MNC’s towards the Indian Economy?

India has come a long way since its independence in 1947! All set to become the next super power in the next decade, India has seen to be bringing about changes accordingly.

Prior to 1991 (in the pre-reform period), Multinational companies did not play much role towards the Indian economy, which was mainly dominated by public enterprises. But post the adoption of industrial policy of liberalisation in 1991, MNC’s have played a pivotal role and privatisation rote of private foreign capital has been recognized as important for rapid growth of the Indian economy.

Let’s point out some of the major contributions of MNC’s towards the Indian economy!

MNCs can bridge the gap between the requirements of foreign capital for increasing foreign investment in India.

Post the liberalization of the economy, MNCs were allowed to make investment in India subject to different ceilings fixed for different industries or projects.

During the pre-reform period, FDI by MNCs was highly discouraged, and we relied heavily on external commercial borrowing (ECB) which was of debt-creating capital inflows. This led to the drastic increase of the external debt of the nation and debt service payments reached the alarming figure of 35% of our current account receipts.

This created doubts on our ability to fulfil our debt obligations, which led to the balance of payments crisis in 1991. By using the FDI medium, we avoid the liability of debt-servicing payments.

Thus, MNCs can play an important role in reducing stress!

There is an acute shortage of jobs in India. And MNCs greatly help in the creation of thousands of jobs.

For example, due to Suzuki firm’s investment in Maruti Udyog, jobs are not only created in the immediate company, but the employment opportunity also extends to the dealer firms who sell Maruti cars as well. Additionally, many intermediate goods are supplied by Indian suppliers to Maruti Udyog and for this many workers are employed by them to manufacture various parts and components used in Maruti cars.

On the other end – India is home to about 200 wholly-owned Centre’s of multinationals that offer IT and ITeS services. Ten new centres have already been set up over the last two years and soon, close to 50% of the Fortune 500 companies will have their facilities in India as well, leading to more jobs.

Another important role of multinational corporations is that they have helped us in gaining the transfer of high sophisticated technology to India.

As a result, the Indian workers and engineers come to know of new superior technology and the way to use it.

In India, the corporate sector spends only few resources on Research and Development (R&D), and it is the giant MNCs that spend a bomb on the development of new technologies. These can greatly benefit us in many ways!

Therefore, MNCs can play an important role in the technological up-gradation of the Indian economy.

With extensive global connections; multinationals can play a significant role in promoting exports of a country in which they invest. For example, China exports have expanded rapidly in recent years due to the large investment made by multinationals in various fields of Chinese industry.

Talking about India –– multinationals had made large investment in plantations whose products they exported. In recent years, Japanese automobile company Suzuki has made a large investment in Maruti Udyog with a joint collaboration with Government of India, and now, Maruti cars are not only being sold in the Indian domestic market but are exported to the foreign countries from India itself, in a large number.

This helps the country earn, a great amount of foreign exchange!

Overall – this only shows just how important MNCs are to a nation, and whether you like it or not, we need them. So random public bashing, for the motive of self-success is not favourable and will do no good!