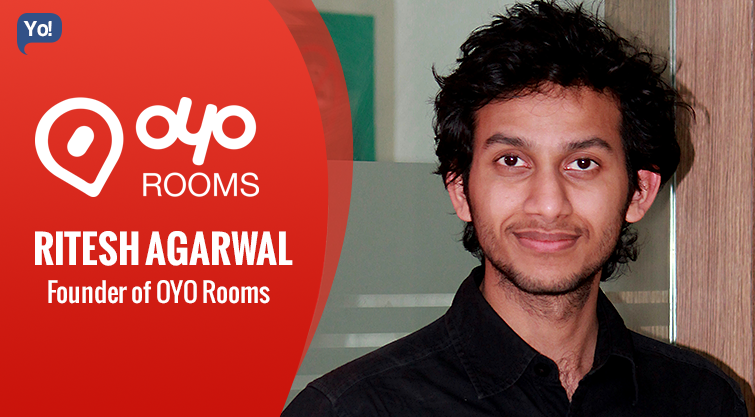 With a current valuation of nearly 360Cr, OYO rooms does nothing out of the box but provides travellers the coolest yet cheapest efficient, young, standardized rooms with no add-ons attached to it!

Personally, Ritesh with his common-man qualities of wheatish, tall, thin, scruffy look, isn’t easy to find in a crowd. But mind you, this is also the look of the founder who puts in 16 hours a day to make his dream come true, and has been through a wild journey from as far back as he can remember, to get this ahead.

The journey of our hero began rather early than normal!

Ritesh was born to a business class family in Bissam Cuttack in Orissa and attended the Sacred Heart School in Rayagada, Orissa.

During the growing up days in Rayagada, Odisha, it was all about fun and learning for him but his ways were rather unconventional from those of other kids.

His fun elements including screwing around with the computer, and trying hard to find opportunities to make mistakes, so that he could learn new stuff. And doing that he gained a keen interest in software!

This started with the idea of it, moved on to knowing about it and then the hunger just went on increasing.

To quench his thirst, he borrowed his elder brother’s books for programming. Some of the basic languages like Basic and Pascal were taught in school itself and the rest he managed to learn from Google baba.

Interestingly, he had started coding when he was just eight years old. So software had obviously become his love. And by the time he reached his 10th grade, he had made up his mind that he wanted to take up coding for a living.

In 2009, Ritesh left for Kota to join IIT and in no time he figured that Kota was anything but a place where one could learn coding. Hence, his dream of coding took a backseat and as he had a lot of time to spare, he started attending Bansal Tutorials that his dad had got him enrolled into. The rest of the time he used to just chill and travel around a lot.

He even started writing a book and ended up inscribing – ‘Indian Engineering Colleges: A Complete Encyclopaedia of Top 100 Engineering Colleges’. This book turned out to become huge on Flipkart and was sold out in a while too. In fact, the tutorials he went to also had this book and his picture was right on the cover.

When he turned 16; Ritesh was chosen among the 240 children to be a part of the Asian Science Camp held at the Tata Institute of Fundamental Research (TIFR) in Mumbai. The camp was an annual forum for pre-collegiate students who aimed at promoting discussion for the betterment of science in the region.

During that time; Ritesh due to the leverage of the free time also used to travel a lot, and stayed in PG’s, budget hotels, etc. And because there was nothing left to interest him about Kota, he often used to take a train to Delhi. He used to stay at odd bed & breakfast (B&B) places and attend events and conferences to meet entrepreneurs and because he couldn’t afford the registration costs, he would often just sneak in.

And that is where it all started!

Life as an Entrepreneur…!

In 2011, Ritesh moved to Delhi with intentions of starting up something of his own and at the same time to prepare for SAT to move to the US for further studies.

Now, money back then was not a problem for him because he had savings from Kota and the pocket money was good; roughly Rs.15,000 for a month.

But fortunately or unfortunately, SAT never happened. Hence, he used to do nothing but meet and read about entrepreneurs, start-ups, businesses, and especially Airbnb!

[TRIVIA: – RITESH HAD JOINED THE UNIVERSITY OF LONDON’S INDIAN CAMPUS, BUT JUST AFTER THREE DAYS OF JOINING HE COULDN’T CONTROL HIS CRAVING TO KICK-START HIS VENTURE SO HE TOOK A DAY’S LEAVE TO WORK ON THE PROJECT. AND FUNNILY NEVER WENT BACK!]

Now, Ritesh during his days had seen and always felt that budget hotels in India didn’t even meet the very basic needs of a budget traveller. Hence, capitalizing on this opportunity, he started his first venture in 2012 – Oravel Stays! It was an aggregator of bed and breakfast stays across India.

In simpler terms, it was meant to be destination for short and midterm rentals for bed and breakfast joints, private rooms and serviced apartments.

In a matter of no time, he also secured funding of Rs 30 lakhs from VentureNursery, an accelerator firm which brought together a bunch of storied investors to nurture start-ups.

With sufficient money in his pockets, he started working on his new found interest and at the same time, he also presented his idea at the Thiel Fellowship – a global contest intended for students under the age of 20. He managed to reach amongst the top ten winners who received a sum of $100,000 [over two years (about Rs 2.7 lakhs / month)] as well as guidance and other resources, to drop out of school and create a start-up, from PayPal co-founder and Facebook investor – Peter Thiel.

With the new found confidence, he started working even more rigorously but to his hard luck, their business model didn’t seem to be picking up. And as much as he tried, things just weren’t falling in place.

Ritesh even got Manish Sinha of Gurgaon based Cinnamon Stays, as their co-founder but unfortunately, it still didn’t help and Manish eventually had to quit the company. As a matter of fact, they even tried replicating the AirBnB model but that also didn’t work and the company was not able to pick up or get substantial transactions.

That is when Ritesh went into the thinking mode and realized that, the biggest pain on the face of this earth while travelling was to find a good, affordable & most importantly “available” hotel to stay in but like always, most of us ended up staying in a crappy place with equally crappy staff, food, etc. which killed the whole trip.

This also reminded of the time he used to face accommodation issues during his trips. There were times when he was sold a crappy place for a huge amount and many-a-times he used find a nice place in a little amount.

This got him motivated again, to create an online yet social community to bring information about all good places together on one platform.

And as a last resort Ritesh tweaked his present business model and in 2013 re-launched Oravel as   “OYO Rooms”.

OYO Rooms was nothing but an idea to create India’s largest chain of efficient, young, standardized rooms with an intention to build the coolest chain of no add-on rooms which might not have Spa, Gym etc like the star hotels but will live upto the basic standards & high expectations for prices like never before.

And to make sure the hotels met their expectations; OYO Rooms reached out to prospective hotels or a hotel owner could also reach out to them, and OYO’s team would visit the place, audit the hotel to understand the changes that would be required to standardize the property as per OYO standards, and shares the same with the hotels.

Moving on; apart from the funding, marketing, reaching out to the property owners and investors, some of the stepping stones that he faced was – a mixed reaction from friends and family around him. But nevertheless, that changed with time!

After the launch, Ritesh even got on board Bhawna Agarwal, former CEO at e-commerce firm SeventyMM for critical business advising.

This time they decided to play it smart & safe, and made sure to leave no stone unturned. They tied-up with a dozen numbers of hotels and with their help offered rooms to its customers.

And it worked exactly as planned! Things started to get better for them and to meet the demands they eventually had to increase their team of two to fifteen and then twenty-five.

In 2014; the company raised Rs. 4 Cr from Lightspeed Venture Partners (LSVP) and DSG Consumer Partners, at a pre-money valuation (valuation of a company prior to investment or financing) of Rs 14 Cr.

What motivated Ritesh even more was that, by now the company was clocking gross bookings of more than Rs.1 Cr. per month.

Since then; OYO Rooms has gone on to become India’s first technology driven network of standardized branded budget hotels and has also widely expanded its presence to 350+ hotels and more than 4000 rooms in 20 cities like Delhi, Gurgaon, Noida, Bangalore, Mumbai, Pune, Goa, Jaipur, Hyderabad, etc, and also aims to expand further to 1000 hotels in 25 cities by 2015 end.

Additionally, their OYO Rooms mobile app has been downloaded more than 160,000 times and more than 20,000 bookings have been made so far. The app ranks amongst the best-rated apps on Google Play Store and has also been listed as one of the top three apps in the ‘Travel & Local’ category.

More recently, the company has also raised another $25 Million from Lightspeed, Sequoia and others.