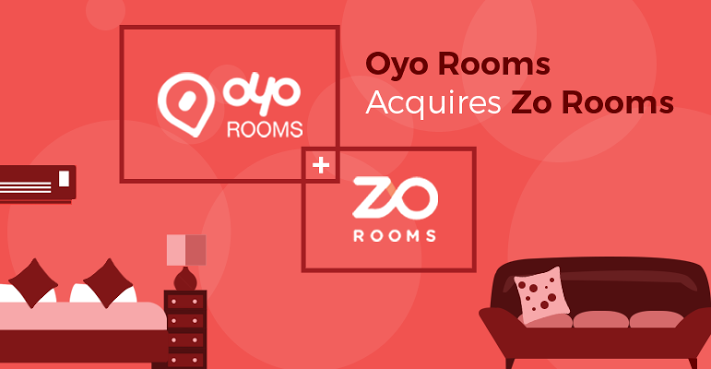 Recently, it has been disclosed by Japanese billionaire Masayoshi Son – Founder and CEO of SoftBank, that Oyo Rooms has acquired its rival Zo Rooms.

After three months of rigorous negotiations, it has turned out to become an all-stock deal, which has valued OYO Rooms at about $350 million. The announcement was made in their earnings report without specifying the deal value.

This deal would also leverage them to use Zo’s technology and a network of 11,000 rooms in 1,000 hotels across more than 50 cities and towns in India.

According to people close to the deal, it has been revealed that it would also allow OYO to cherry-pick what it wants and leave the rest.

In against for the acquisition, Oyo will be shelling out 7% of the combined entity, out of which the founders will only get close to 2.5% stake, while the rest will be held by Tiger Global Management LLC, Orios Venture Partners, angel investor Zishaan Hayath and Mato Peric, among others.

Zostel Hospitality (the parent company) will shut down its operations post the acquisition is completed and may also default on some of its dues to vendors, advertising and branding firms as well.

Basically, almost all the formalities have been completed and the deal is likely to be signed in the next 15-20 days as well.

This acquisition has made OYO Rooms the clear market leader in this budget hotel aggregation and accommodation segment. They currently operate in more than 173 Indian cities through close to 4,500 hotels offering 40,000 rooms, and have even expanded their operations internationally in Malaysia as well.

The creative synergies and the firepower of the combined entity of OYO and ZO Rooms, gives them the upper hand in comparison with the other players in this sector such as Treebo and Stayzilla.

As a matter of fact, it is also being hinted that OYO Rooms is looking beyond just budget hotel aggregation and will also be launching their premium ‘OYO Experience’ through flagship properties, to go after the more premium segment and more geographies as well.

Why Did The Acquisition Take Place?

To begin with – this transaction has come around the time when a global slowdown has been observed in the start-up funding market. Investors have become increasingly risk-averse and not willing to invest in start-ups that aren’t market leaders in their respective sectors.

This was being termed as the consolidation market for the Indian start-up ecosystem, and was also a much needed one in this hyper competitive space of budget hotel accommodation.

To add to that, investors are in no mood to back companies which do not have the potential to become market leaders. In the past as well, many such investors like Tiger Global had played similar strategies.

The entry of these players only made the investors in hotel start-ups even more cautious! It is believed that, their entry into this market led to triggering of consolidation.

While only 10-15% of the business of OYO was affected, Zo Rooms was gravely affected by it and was trying to find solutions to fight it.

Then in August 2015 the tables turned in favour of OYO when it received a funding worth $100 Million led by Softbank. On the other hand, ZO Rooms had raised an estimated $47 Million in two rounds from Orios Venture Partners and Tiger Global.

Post that, ZO Rooms aggressively tried to raise funds from new as well as existing investors as well, but no one had the conviction to put more money in them, while on the other end, OYO Rooms had just got footing firmer, and had also reported a 34-fold increase from the previous year.

Many market observers believed that this deal was forced from the investors as OYO had scaled much faster and had almost killed competitors with its deep pocket, and many had seen this deal coming as well!

How Will It Affect The Current Market Scenario?

To begin with – since there has been a sudden and recent entry of large online travel firms including – MakeMyTrip, Yatra and Goibibo, along with their large customer bases; it is only going to intensify the competition in an unproven business even more.

Then there are several others in the space such as Vista Rooms, ZipRoom and WudStay, who hold a stronger position in the premium segment too!

Moreover, even though OYO holds decent firepower, they yet have not been able to provide a uniform experience to their customers which have led to a long range of complaints on the social media. And the bigger challenge will be to see how the company is going to set up a proper mechanism to provide consistency of service as well.

So if they wish to stay put in the battle, it will be very crucial for OYO to focus on ensuring quality, which has been a long-standing pain point for marketplace models.

What Led To The Consolidation Of The Current Market?

When it all began, budget hotel aggregators were being termed and assumed to be the next big thing for investors and entrepreneurs. Investors began pumping in a lot of money into at least 10 start-ups on similar lines.

Turns out, they were wrong. Again! Similar to most other new and unproven business models, investors and entrepreneurs overestimated the potential of the business.

Even though the market potential seems to be large, and analysts have often said that the supply of hotel rooms in India is way below demand, but the problem remains that building a viable business in budget hotels is more challenging than you may think.

And to counter the challenges, these budget hotel start-ups have invest millions of dollars in branding unorganized and independent hotels, training their staff, buying inventory (hotel room bookings) for months; but the occupancy rates have remained low, partly as these brands are new.

So even after being relatively well-funded, these business models time-and-again have failed to show meaningful revenues.

Hence, the investors have decided to slowdown fresh funding, more specifically the ones which are nascent and unproven business models.

Talking about the market overall – despite being relatively well-funded, budget hotels have consistently failed to deliver meaningful revenues so far.

Investors are becoming very conscious about tangible growth these days, and unless they don’t see a clear market leader in a segment, raising fresh funds is going to be a very tough nut to crack, and such mergers or acquisitions shall continue to happen.

And the players without clear value addition will continue disappear!