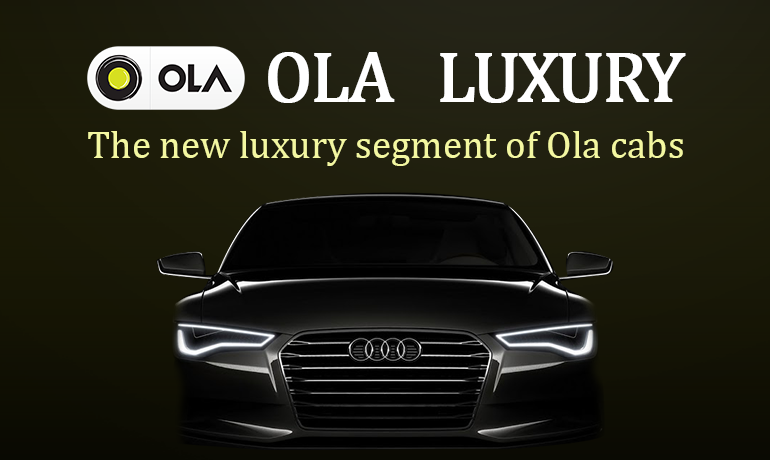 Our nation is dominated by the smaller economy vehicles, given our day to day travel requirements; making the luxury vehicles market untouched! As much as we all wish to rent a luxury vehicle for our travels, there is a huge scarcity of such luxury offerings in India.Agreed, luxury vehicles for rent are not completely unheard of, but the chauffeured availability is definitely new to Mumbai.

Hence in an attempt to tap this market, Ola Cabs, has recently launched a new category on their app called ‘Ola Lux’.

Sensing the immense potential of the category; Ola Lux is bringing to you a luxury cab experience to give you the opportunity to ride across the town with style, panache and stand out amongst everything and everyone around you.

Some of their offerings in this luxury segment includes sedans like Jaguar, Mercedes, Audi, BMW, Toyota Fortuner and Honda Accord amongst other high-end sedans and SUVs.

In these beginning stages, this new stylish category has been made available across South Mumbai and gradually will be introduced to other parts of the city as well. Ola’s low-fare policy would also be applicable to their luxury segment too.

The company has decided a minimum base fare of ₹200 and then ₹19 per/km for their Ola Lux. There would also be a Ride time charge of ₹2 per minute (applicable post 5 mins)

added to the final bill as well.

Some of the top notch features offered in the luxury segment include Upfront display of driver details, SOS buttons, AutoConnect Wifi, Live Tracking and Seamless Payment using Ola Money will continue to be available on Ola Lux.

‘Auto-Connect Wi-Fi’, a proprietary feature of Ola Cabs, developed at their ‘Innovation Labs’, and allows the users to automatically connect to Wi-Fi in an Ola cab without having to enter credentials every single time.

It provides users with a one-time authentication on their phones, using which one can connect to Ola’s secure network and use the Ola Wi-Fi service on their devices whenever they take the ride.

The response and acceptance of the service has been so tremendous, that the company is planning to make Ola Wi-Fi available across all their other categories including Micro, Mini and Auto-rickshaws, as well. Furthermore, Ola Lux will also be extended to cities such as Delhi and Bengaluru in the next two months too.

The launch event held the presences of Bollywood actress Chitrangada Singh who believed that given the busy schedules and lifestyle of the population, luxury segment comes as a boon, and Ola indeed is taking the luxury travel experience a notch higher, with this new service of theirs.

To begin with – this move from Ola Cabs of launching Ola Luxury, comes just 2 months after Uber stopped their services of UberBLACK everywhere in India, except Mumbai.

About a year ago, Uber had also successfully conducted a campaign in collaboration with automobiles’ marketplace Droom, with luxury cars like Audi and Hummer on their platform called – “Uber Supercars” in Delhi, as well.

Other than that, it has been observed that the number of young executives, entrepreneurs and professionals has drastically grown. Young adults like the flexibility of not having to drive in heavy traffic or having to park, but at the same time, travelling in a style and luxury; thus, tremendously increasing the need for on-demand luxury service.

Keeping all that in mind – their new category brings unmatched style and comfort for those who demand it, and provides superior in-cab experience, and choices to suit the need, usage occasion, and mood of its customers. Basically, it is an offering for the high-end customers!

And interestingly, the launch of Ola Lux, which is priced at almost double than its other categories, comes at a time when the company is aggressively pushing cheaper alternatives to out beat their rival Uber.

In just three weeks, they Ola Cabs had put up a category (Ola Micro) to compete with UberGO (Uber’s cheapest option).

The launch of Ola Micro was a result of the company learning the Indian market! They noticed that India is a group of micro markets, each of which come with different needs. And this is an attempt by Ola to ensure that every market is taken care of, and all their needs are catered to!

What is even more interesting to note is that –– This is not the first time Ola has launched a luxury segment.

In fact, 2013 was the first time Ola Cabs had launched their Luxury Segment in Bangalore and called it “Ola Luxury”, and was further expanded to Mumbai in 2014 that included a fleet of Audi, BMW, Mercedes, and Jaguar cars.

This service was launched just ahead of Uber’s launch of their luxury service – UberBLACK and was priced at a Base Fare of ₹250, a post which the customer would be charged ₹20/km and 2/minute.

The fares are quite similar to what Uber was charging in Delhi, which asked for a base fare of ₹200 followed by ₹20/km and ₹2/min in Delhi.

Ola Cabs had introduced this luxury fleet in September of 2013 and were also claiming to process a booking in three digits.

However, it’s still not been made clear if, when and why did they shut down their service.

All of these collectively point out that Ola has opted to launch this service for two important reasons – one being to compete with their rival Uber, and the second being to cater to the different markets as well.

How does the future look like for Ola Lux? A brief market analysis…!

Indeed, the Luxury Vehicle rentals have a great demand in the Indian market, but it cannot be ignored that this opportunity only exists only in some areas and will certainly not a viable option in the Tier-II or Tier-III cities of India, given the fact that, the demand will be very minimal in these areas.

Looking at the lucrative nature of the untapped market, Uber had also launched Uber BLACK earlier, but the company had to wind up the service due to lack of demand in all the areas across India and limit themselves only to South Mumbai, where the demand for such vehicles seems to be high.

Most parts of the nation prefer a cheaper and cost effective option for their transportation, and such options clearly don’t offer that, but on the other end, upscale neighbourhoods in cities like Mumbai, Delhi and Bangalore die for such services.

So the success of Ola Lux will depend on the demand and the areas where they launch! They will have to play very strategically in their offerings and the catered areas.

If they are able to achieve that, Ola Lux won’t have a fate similar to that of Uber!