OLA’s Latest Fundraiser Of $500mn Will Help Them Grow In Size And Otherwise! 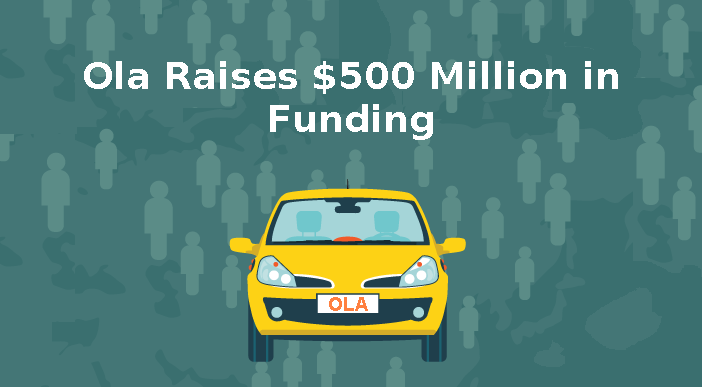 According to the makers, they will be using the funds for majorly four purposes, that is –

After closing this round of investment, Ola has received a total of more than $1.3 billion in external funding, with the previous one being of $400 million.

Speaking about the whole industry in general; a lot of VC money has been pumped into the taxi space in India, which is now seen to be heating up and has also been seeing a extraordinary growth in the past few years as well.

Going by the current scenario and stats; clearly, the Indian taxi market is growing drastically and won’t be seeing a saturation point anytime soon. At this point, the industry is said to be valued somewhere around $6-$9 billion dollars by different estimates, and is projected to grow at the rate of 17-20% annually.

And in this ocean, the organised taxi market, with a market share of 3-4%, is as small as a pond, and still has a lot of potential to grow.

How Much Has Ola Grown In Terms Of Market Size & Market Valuation?

To begin with – The makers have reported that, Ola’s platform accounts for more than 275,000 cabs and 75,000 auto-rickshaws, which do not even include the kaali peeli taxis and yellow taxis across all their 102 cities in India.

To add to that, the company has stupendously grown by 30 times in the last one year, and now logs over One million booking requests a day as well.

The company is also anticipated by the investors, to post a pre-tax profit by 2017-2018 – reported by DealStreetAsia.

As per company’s statement and media reports, Ola presently accounts for whooping 80% of the market share of the given industry in India, out-beating all its major competitors.

Since their Series E round of funding of $400 Mn, the Taxi app has become the third-most valuable venture-backed company in India (after online marketplaces Flipkart and Snapdeal) and the #1 Taxi Aggregator as well.

And lastly, if you compare Ola with its biggest competitor – Uber, Ola remains a clear winner of the market share, as it holds a strong presence in over 100 cities, while Uber is still in 20+.

Over the past one year, the company has grown by manifolds and has various categories such as –

Diversifying into such ventures has only put the company in direct competition with various other major brands in those relevant industries like – Foodpanda, Scootsy, Alibaba Group- backed PayTM, Snapdeal-owned FreeCharge, and many others. But at the same time, has also made the company equally larger and in line to become the biggest player in the Indian Start-up Terrain.

Talking about their recent acquisitions –In March 2015, Ola took over its competitor ‘TaxiForSure’ for $200 million and has also transferred their users to Ola’s mobile
application. Other than that; more recently, the company has also acquired ‘Geotagg’, a trip-planning applications company in November 2015, for an undisclosed amount, to strengthen its new bus-shuttle service.

Moving ahead, the grand vision of the company is to rule over the rapidly growing middle class in India, by offering a relatively better transportation infrastructure and service that is coupled with technology.

Founded by Bhavish Aggarwal; Olacabs.com is a marketplace for all types of cabs, cars and now auto-rickshaw rentals.

Once anyone enters their requirement on the app; it searches through its available inventory of their partners and comes back with a list of options at different prices from different operators. One can see Ola’s ratings of that operator, what other customers have said about them and then can book it. If not that; then one can also call Ola and they help through the process!

Till now; Ola only worked with the Drivers to provide its services but with their latest acquisition, which is clearly an attempt to increase its strengths, it will also be working together with the cab operators with the help of TaxiForSure.

With this acquisition in place; Ola has now announced the launch of their latest feature of “Cashless Rides” on their platform. The beauty of this add-on is that, it not only works with the cabs on their network, but has also been extended to “Auto rickshaws and Kaali-Peeli taxis” as well!

Evidently, Autos and Kaali-Peeli’s are the most used modes of personal transportation available in our cities today. But at the same time they have equally remained messed up for various reasons. For literally decades, these modes have been operating without leveraging the benefits of scale and efficiency.

Hence, the launch of this new feature can prove to be highly fruitful for many and obviously is a win-win for all! Using this app, Ola will be able to connect the auto or Kaali-Peeli drivers and customers with absolute ease; thus, bringing more convenience to the users and more income for the drivers. And to top that; with cashless rides for these modes, the experience for both customers and drivers will become seamless!

It’s actually pretty simple! All one needs to do is: –