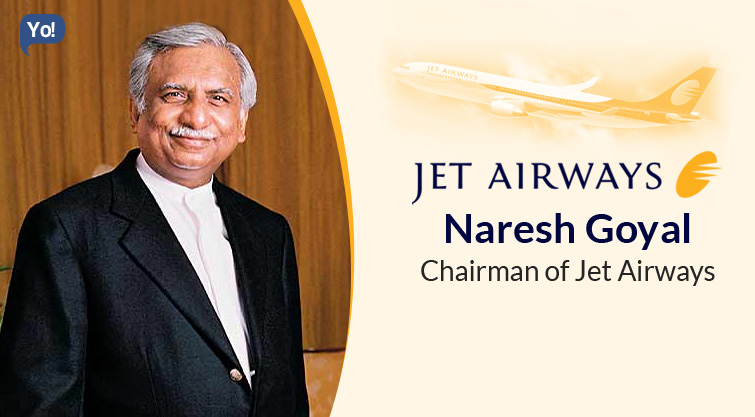 Born on the 29th of July 1949 in Sangrur (Punjab), Naresh Goyal is the Founder and Chairman of Jet Airways, India’s premier international airline. He is currently valued at $3.2 Billion.

Naresh comes with a 40 years of experience in the Civil Aviation industry, and was once [during the peak of his career] the 16th richest Indian (in 2005), as well.

His, is the perfect rags to riches story, or you can say – from the streets to the sky! There was a time when his family had auctioned everything they owned and they had reached to a stage where they had zilch money or house to survive! From touching bankruptcy at the minor age of 12, becoming the founder and chairman of India’s premiere Airline, Naresh has seen it all. When he says – been there, done that. He literally means it!

There are a range of achievements attached to his name. Some of these include: –

Lord Marshall of British Airways and JY Pillay, former chairman of Singapore Airlines, are two of the few people that he admires the most and has learnt a lot from.

Talking about his personal life – he is married to Anita Goyal and has two kids a son – Nivaan (24) and a daughter – Namrata (26). Together they live in London. He had met his wife after she joined the company in 1979 as a marketing analyst and rose to become the head of marketing and sales. They married nine years later. He loves to watch Bollywood movies in his free time.

Naresh was born in the house of a jewellery dealer! His father had died when he was a child. He studied up to sixth standard at Govt. Raj High School for Boys. His family was hit by an astute economic crisis when he was just 11-years old. Even their house was auctioned. He then lived with his mother’s uncle.

Their condition was so bad that, Naresh had to walk to school for a few miles every day because his parents could not afford a bicycle for him. He also wanted to become a Chartered Accountant, but due to their financial constraints, he was forced into doing Bachelors in Commerce too.

After graduating in Commerce in 1967, Naresh then joined the travel business with the GSA (GSA) for Lebanese International Airlines. This was his maternal uncle Seth Charan Das Ram Lal’s travel agency called – East West Agencies. He started off with a salary of ₹300/pm.

During this period of 7 years, he went through extensive training covering all the aspects of the travel business through his association with several foreign airlines. For the first three years, he used to sleep in the office itself.

Since then he went on to work at several positions for several companies that included: –

As an international airline agent, Naresh could see the frustration felt by India’s middle classes towards the state-owned carriers. Hence, he decided to resolve the pain-point and, with the experience, expertise and technical know-how he had acquired, to start something of his own.

In 1974, Naresh borrowed £500 from his mother, and started ‘Jetair (Private) Limited’ that represented the likes of Air France, Austrian Airlines and Cathay Pacific. The objective of the company was to provide Sales and Marketing representation to foreign airlines in India. He was also involved in the development of traffic patterns, route structures, operational economics and flight scheduling, as well.

In the next year, he was also appointed as the Regional manager of ‘Philippine Airlines’ in India, and handled the commercial operations of the airline in India.

In 1991, Government of India opened the Indian economy and enounced the Open Skies Policy. Naresh decided to make use of this opportunity to setup Jet Airways, an airline for domestic air- travel.

And thus, begun the journey of Jet Airways!

Jet Airways commenced their commercial operations on the 5th of May 1993.

The airline was started with the backing of a group of Middle East investors including Gulf Air and Kuwaiti Air.

The partnership with the Gulf carriers was no accident, given that a massive number of Indians used to work in that region and flights were going only into India’s main cities. Naresh’s idea was to link those with smaller cities, match schedules and get cross promotion.

They began by leasing four aircrafts, and got onboard talent from airlines he admired.

The early years were said to be the most hectic ones, everyone including Naresh had to roll up their sleeves. The pilot may even clean the toilet to keep the aircraft clean, so would the founder himself.

In its first year of operations, Jet Airways managed to carry 730,000 passengers!

And by the end of that year, international routes from India were liberalised and jet started with their first flight between Mumbai and London, followed by Delhi-London in 2005 too. In the same year, the company crossed yet another huge milestone when it launched its IPO.

And by the third quarter of 2010, Jet Airways had become the largest airline in India with a passenger market share of 22.6%.

Taking advantage of the Government of India’s FDI policy, Naresh also led Jet Airways to successfully conclude a strategic partner deal with Etihad Airways in 2013. Etihad was given 24% equity stake in Jet Airways, in against for $379 Mn.

Not only did the deal offer Jet Airways’s balance sheet a much-needed shot of capital, they also benefitted from Etihad’s expertise in running global aviation operations.

The strategic investment was expected to deliver wide-ranging revenue growth and cost synergy opportunities for both airlines in the areas of operational synergies and cost savings including fleet acquisition, maintenance, product development and training.

And so it did!

Jet Airways made profits in the third quarter of the financial year 2013-14, after posting losses over the previous year.

The ride has not been entirely smooth for Jet Airways. A market share that had peaked at 46% in 2006, has seen to be dramatically falling; while, all other aggressive new low-cost carriers that had been launched very recently, were seen to be grabbing control of the market.

The other problems of the airline included their confusing business model of running both — a low-cost and a full-service carrier. This left customers unsure at times about what to expect on a Jet flight. Would the meal be complimentary or would they have to pay for it?

Then there was the seat configuration that wasn’t uniform across the fleet wherein — the number of business-class seats varied from 8 to 16. This used to be a huge operational challenge for the management on how and where to deploy which aircraft.

That is when the company decided to fix the mess, and adopted a Turnaround Strategy!

A turnaround specialist heading Air Seychelles was hired to lead Jet, with aims to reduce losses in 2015, consolidate in 2016 and turn profitable in 2017.

The first part of the turnaround strategy was to split the low-cost model from the main operations. They also cut back on huge costs by merging their two budget carriers JetLite and JetKonnect and cutting back on international flights.

A full-service brand across the business converted into a huge improvement in the corporate customer base, which eventually led to higher yields.

Next – the seat configuration on the domestic fleet were standardised with 12 business and 156 economy-class seats. This also gave the airline the flexibility to use its aircraft both on domestic and international routes.

Then, of course, there was the much-needed capital booster shot they had recently received from Etihad Airways as well.

The Jet-Etihad partnership has completed its first full financial year of operations (2014-15) and Jet’s earnings have exhibited a sustained recovery, which also reported a net quarterly profit as well.

And when you look at them today, the company has grown on to become the second largest airline in India, with a 21.2% passenger market share.

And lastly, they also offer a special flying programme called Jet Privilege, which caters to the customers that fly more frequently. Here, they can use the services of Jet Airways, by becoming members of Jet Privilege and accumulating miles to their credit.

The airline is headquartered in Andheri (Mumbai). They now, operate more than 300 flights daily to 68 destinations [48 domestic and 20 international] worldwide in 17 countries across Asia, Europe and North America.

The company is listed on the Bombay Stock Exchange, and 51% of its stock is owned by Naresh Goyal, through his company Tailwinds International and the remaining 49% by other investors.

Their net sales had risen by 11.55% to ₹4,834.50 crores, against the same quarter last year, and after a really long time, Jet had reported a net profit of ₹221.70 crores for the quarter of April-June 2015, against a loss of ₹217.60 crores during the same time last year. This also led to the improvement in the company’s stock price as well.