Microsoft will acquire LinkedIn: – Everything you need to know. Literally! 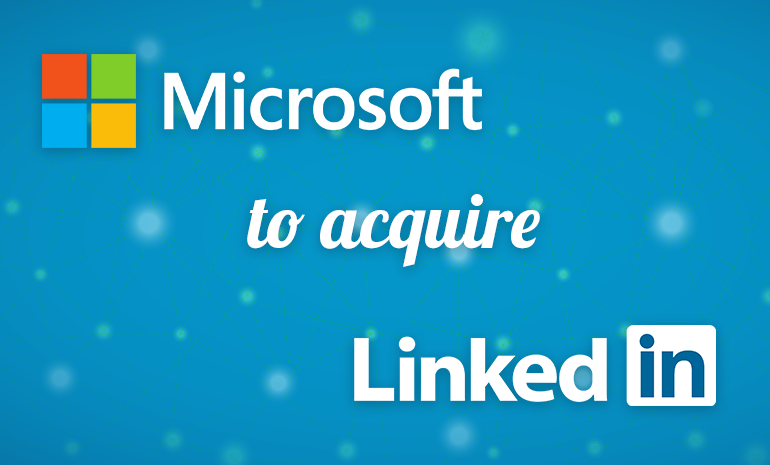 Huge news in the world of M&A – Microsoft Corporation will be acquiring LinkedIn for $196 per share in an all-cash deal that is being valued at $26.2 Billion. Reid Hoffman, the Cofounder and Chairman of LinkedIn will get $2.9 Billion for the sale of his shares. He also happens to be the controlling stake holder in the company.

This takeover is being considered as one of the biggest acquisitions of Microsoft, who has paid $8.5 Billion for Skype in 2011 and $7.2 Billion for Nokia’s mobile phone business in 2013.

And, just the announcement itself, saw a jump in LinkedIn shares early Monday and lifted Reid’s net worth by more than $900 million too!

As a part of the deal – LinkedIn will be keeping their brand, product, culture and independence, and it will become a part of Microsoft’s productivity and business processes segment; while Jeff Weiner will remain as the CEO of LinkedIn, but will directly report to Satya Nadella directly.

The transaction has been unanimously approved by all the Boards of Directors of both LinkedIn and Microsoft, and is awaiting approval by LinkedIn’s shareholders. It is expected to close by this calendar year.

The deal, which is also awaiting approval from the regulators in the US, EU, Canada and Brazil; is being anticipated to generate an annual savings of around $150 Million by 2018.

Despite having over $92 Billion cash pile, Microsoft would mostly be paying for LinkedIn by issuing new debt and upon closing, they would also be reporting LinkedIn’s financials as part of Microsoft’s Productivity and Business Processes segment.

But if for some reason the deal does not go through, according to Microsoft’s SEC filing, LinkedIn will have to pay Microsoft a $725 Million termination fee.

Microsoft and LinkedIn had also hosted a Joint Conference call with investors on the 13th of June to discuss this transaction. This call has been made available via webcast and the presentation for the call is available on the Microsoft News Center.

This surprise deal has also helped to renew hope in another struggling social network — Twitter — who’s share price rose by around 6% after the announcement of acquisition of LinkedIn, will be next in line to get sold too.

FAILED ATTEMPTS OF ACQUISITION OF LINKEDIN IN THE PAST…!

The problem was that Microsoft and most of its peers didn’t see the logic in buying LinkedIn. People never fully understood the value LinkedIn was creating until after they went public.

Before LinkedIn’s 2011 public listing, Microsoft and several other tech companies had entered into talks to buy LinkedIn many times.

The first time Microsoft had considered acquiring LinkedIn was around in 2008, for about $1.5 billion (an amount which, according to sources, LinkedIn would likely have agreed to), but Microsoft unenthusiastic approach, never let the deal to materialize.

Around the same time, LinkedIn had also received an unofficial offer from Yahoo, which valued the company at around $250 Million. Multiple internal meetings were also held on the matter, but since no actual bid was put forward to LinkedIn, the deal never saw the daylight.

In this whole period since their initiation, the only serious offer that LinkedIn had received was from Salesforce.com, who wanted to acquire a large stake in LinkedIn during an investment round in 2008. LinkedIn’s team decided not to take any funding from a company who was looking to acquire it. This, then led to launching of Salesforce’s own social workplace application called “Chatter” in 2010.

Clearly, LinkedIn would have been a lot less expensive, if either of the companies, more specifically Microsoft, would have realized LinkedIn’s true potential and value back in 2008!

WHAT IS THE UNDERLYING REASON BEHIND THE ACQUISITION?

To begin with, this is what both the founders had to say about the deal ––– || This deal brings together the world’s leading professional cloud with the world’s leading professional network. Jeff and I both believe we have a significant opportunity to accelerate LinkedIn’s growth and the value it brings to its members with Microsoft’s assets and scale. In fact, when Reid Hoffman, the founder of LinkedIn, and I spoke about the opportunity for us to come together, he called it a “re-founding” moment for LinkedIn and an opportunity to reach the mission the company set out on 13 years ago. – Satya Nadella

But quite frankly, we think there’s more to it, than what meets the eye!

Many experts believe that the few of the major reasons why LinkedIn went for a sell out was because: LinkedIn’s stock was struggling, the business was drastically slowing down and their future growth was becoming a big concern for them.

Even though LinkedIn had 433 million members, $3 Billion in revenues in 2015 (up by 35% from 2014) and their stock had previously been trading at a very high price,, its growth had been slowing down gradually.

Over the past few months, despite still being a sizable business, shares of LinkedIn had started to take a dive, as the share price of Facebook rose. The big shock came in the February of 2016 when the LinkedIn warned the market of disappointing revenue and profits ahead for the first quarter and eventually reported an annual loss of $166 Million, which had led to an overall fall of 42% of their share price, till just before the deal was announced as well.

It was only after this tricky period, LinkedIn shares jumped by 47% to $192.60 in New York, which happened due to the announcement of the deal!

“But as opposed to the popular opinion – this deal is, in fact, not at all a story about a failing company getting scooped up by a giant.“

It’s about more than just money! It is a strong message, a powerful signal of where Satya Nadella is planning to take Microsoft.

And to achieve those ambitions, Microsoft is paying a 50% premium on Friday’s (10.06.2016) closing share price to buy LinkedIn. This roughly adds up to around $250 for every active user.

And as stated by BBC – “To put the aforementioned figures into context, that’s about the market value of Sky, or eight times as much as Daily Mail owner DMGT – and they are both profitable.”

This brings us to the next most obvious question – What’s in it for both the parties?

WHAT’S MICROSOFT GETTING FOR $26.2 BILLION?

Well, to begin with – contrary to popular belief, the acquisition is a win-win for both the parties!

It’s a deal that makes sense for both companies. Since Satya is slowly changing the complete focus and course of the company and is aiming towards becoming a cloud computing business that offers all sorts of professional services to clients – that includes a social network to connect them to each other.

They are trying to ride the wave of the new technologies, and are trying to bring AI (Artificial Intelligence), Mobile and Cloud together, under one roof called – Microsoft; and LinkedIn’s social network will give it a significant foothold in this area.

But speaking overall, Microsoft will be getting their core business of: Talent Solutions, Marketing Solutions and Premium Subscriptions, along with their Sales Solutions and their Learning & Development Unit (Lynda [that LinkedIn acquired for $1.5 Billion in 2015]).

And essentially, LinkedIn could be used as the “social fabric” for all of Microsoft’s products, giving them a far bigger reach in the social networking space and professional content, and a variety of business models could be applied from subscriptions, advertisements to social selling.

So it can safely be said that; LinkedIn, with their strong presence in 200 countries, 433 million registered overall, 60% mobile traffic, 45 Billion quarterly page views. 7 Million active job listings, a core business of recruitment ads (termed “Talent Solutions”) accounting for $2 Billion of the company’s $3 Billion revenues in 2015 – can definitely be a solid partner to fulfil Microsoft’s ambitions.

While on the other end – aside from the obvious fact that, LinkedIn is being paid a much higher price of $26.2 Billion, at a much, much higher value (keeping in mind their current market value); overall, the deal will only help LinkedIn further accelerate the growth of their core businesses.

Not only will this deal help them drastically reduce their marketing costs; but with the help of Microsoft’s network of more than 1 billion customers, LinkedIn would also be able to gain new corporate solutions customers, paid premium subscription members and increase sales of their ‘Sales Navigator’ service and advertising products as well.