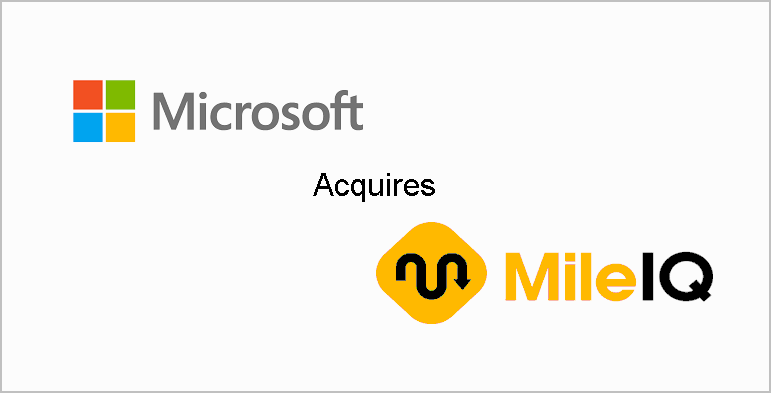 So it’s just in that – Microsoft has recently acquired ‘Mobile Data Labs‘. The start-up is famous for its app called “MileIQ”.

For all those who aren’t aware, MileIQ is one of the most popular Android and iOS mileage-tracking apps which can automatically track how far you drive.

The financials of the deal have not been disclosed by either of the companies, but it is certain that the app won’t be going anywhere. Microsoft won’t be shutting the app down, at least not anytime soon.

The only difference will be that the people who till before were working for Mobile Data Labs, will now be working on integrations with Microsoft software.

Mobile Data labs will continue to build and offer mobile productivity solutions as they were, and the only difference now would be that, it would also be taking advantage of insights from Office 365 and the Office Graph.

On the other end, Microsoft, for a fact knows that phones now are a primary device for many, and since most of its products were made for desktop usage the company has now opted for the mobile route.

They understand that the mobile and cloud revolution has pushed the users to demand for more compact, fast apps for their smart phones, and acquisitions like such clearly show that Microsoft is willing to buy up start-ups to attain & maintain its superiority in the mobile & cloud world as well.

Hence, even though this is Microsoft’s latest acquisition since Satya Nadella became the CEO and opted for a “mobile first and cloud-first” strategy, this isn’t their first acquisition.

Some of the recent others include – Acompli, Sunrise, and Wunderlist as well.

Moreover, Microsoft is also internally building an army of early-stage mobile apps and their latest is the Android app launcher Arrow.

Redmond-based prodigy of Mobile Data Labs – MileIQ is an app that automatically tracks and logs the miles you drive. In other words, the app helps business travelers to track the miles they drive on business.

The app was cofounded in 2013 by Dan Bomze and Chuck Dietrich. Dan wanted to make an app that was a mix of his business credit card and Fitbit. Something that would automatically log his drives, calculate their value, and sync his mileage reports, etc…

As much as the idea sounds common, yet MileIQ has turned out to actually be a handy tool to millions of workers who otherwise had to track and report their miles manually. It is of great help for those who intend to claim deductions or reimbursements.

The app uses handset’s sensors to calculate the mileage, with the help of which the users can save around $547 a month and $6500 a year.

Till before it got acquired, it had managed to raise a total of more than ‘$15 million‘ from CRV, SV Angle, and Salesforce CEO Marc Benioff.

The app is said to have received more than 1 million users and has been the top grossing finance app in the iTunes store for the last 20 months.