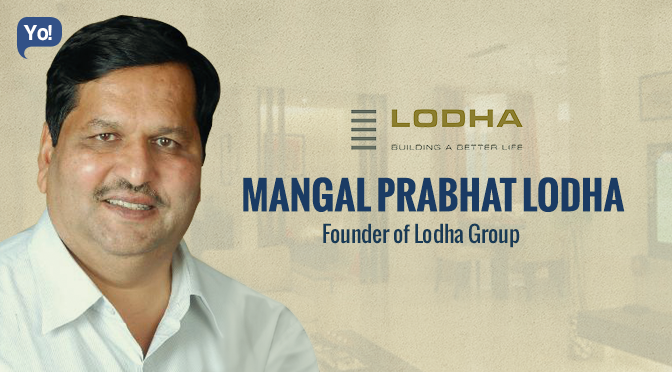 Born on the 18th of December 1955; Mangal Prabhat Lodha is the founder of Lodha Group – a Mumbai based real estate developer and is also one of the highly-respected Politicians, India has ever seen.

Presently he acts as the Chairman of the group, whereas on the other end, he has devoted most of his time to the society and works as the Member of the Legislative Assembly & along with that also acts as the Vice-President of the ruling party i.e. Bharatiya Janata Party (BJP), Maharashtra.

Personally, he currently lives with his wife Manju Lodha and has two sons, Abhishek – who holds a Masters in Industrial Systems Engineering from the Georgia Institute of Technology and Abhinandan – who holds a Masters in Business Administration from Cardiff University, who have taken the reigns of Lodha Group in their hands and now run the show as Managing Director & Deputy Managing Director, respectively.

Mangalji is the son of Shri Guman Mal Lodha, a freedom fighter and the chief justice of the Guwahati High Court. Born in Jodhpur, he completed his graduation in the field of Commerce and later went on to pursue LLB from the University of Jodhpur.

Soon after he was done with his studies, without wasting any time, he began practicing law in Jodhpur High Court. His career seemed to be doing well and was also picking up a steady growth too!

Now even though he moved, but there was something that was coming across as unappealing, something seemed to be missing! He began to understand that this clearly was not what he wanted to do.

Therefore, he cut law from his life and moved to the city of dreams – Mumbai, in 1981 and in an attempt to accomplish his dreams he laid the foundation of the Lodha Group!

And since then his passion became his career! 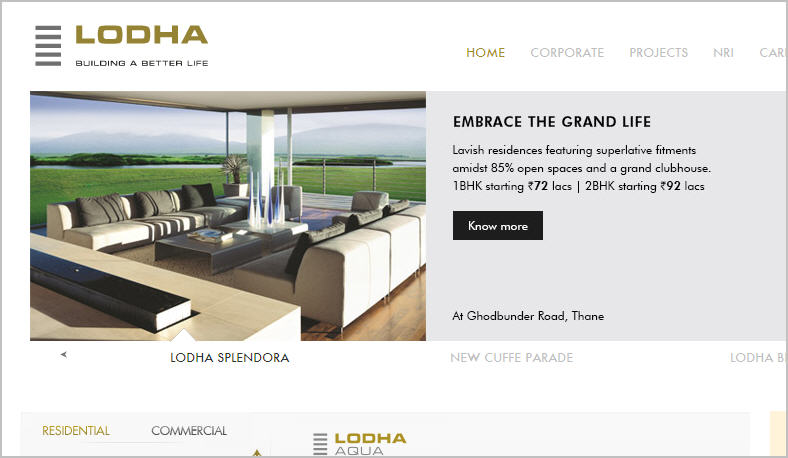 Now that the easier part of his story was done, he now had to move to the difficult part of it. He now had to form a sustainable and steadily growing company, which becomes able to support thousands.

Since their formation in 1981; Lodha group under the roof of Mangalji’s expertise and sharp vision did nothing else but flourish to greater heights, using every opportunity that presented itself and religiously followed a single path which was less treaded.

Lodha started their journey by reaching out to the suburbs of Mumbai, Thane to be more specific. This was an area which literally none of the other developers used to set foot in, back in the days. He began by giving people what nobody was offering and that too in very reasonable rates.

For the customers to benefit more from their properties; Lodha Group introduced a “Customer Rewards Program” and also became the first Indian real estate company to do so.

To show their authenticity; they even introduced LEED certification for their commercial projects. Going against the old-age fashion; Lodha Group initiated the method of booking flats by ‘invitation only’.

Their properties were amongst the first and the best ones with hi-tech homes, and state-of-the-art facilities, where the owners could control electronic gadgets in the houses through their mobile phones.

Clearly, Mangalji was not only giving some of the best properties to live in, but was also directly or indirectly raising the standard of living of the people using some highly innovative strategies too.

Within a very short period of time, due to these and many other unique strategies; a huge buzz was created about them and the group began to receive a crazy response from the buyers.

Although this indeed was a success to celebrate, but at the same time, this did not let Mangalji divert from his path.

In the next almost 20 years; Mangalji very quietly step-by-step began building his base. By offering such beautiful amenities and luxuries, he began to create an addiction amongst the masses.

During this phase he stayed off the media radar and also only focused on middle-class section of Mumbai. Gradually, as and when he thought that the company was ready, he also expanded his base to Hyderabad and Pune.

Additionally, in 2003, when he saw that his son’s Abhishek & Abhinandan were ready to take care of the business, he also handed it over to them and took over the position of the Chairman. Of course, the last say still remains with him.

But the major and the biggest jump came in 2008!

In 2008; Lodha group received one of the biggest funding of their lives of worth Rs.1,700 Cr. from a group of investors led by Deutsche Bank in 2008. This is also known to be one of the largest FDI (Foreign Direct Investment) deals in the history of Indian Real Estate

Now what was interesting to note was that; back then the company was just worth Rs. 266 Cr (USD 2.66 billion) at the end of the Financial Year 2009-10, but because they gained immense respect amongst the investors and the masses, not to forget their credibility as well, that they were able to receive such a huge funding.

Moving on, using these funds the company again made the headlines by bagging the city’s costliest land deal, by acquiring a 25,000 sq meter plot in Wadala for a whooping Rs. 4,050 Cr. in an auction conducted by Mumbai Metropolitan Region Development Authority (MMRDA) in 2010.

If you thought this was enough; then two years later, they came back with a bang and bought a 17-acre mill in Worli from DLF for Rs. 2,700 Cr.

Now unlike Mangalji, his sons were very aggressive, when it came to business and keeping that in mind, they decided to expand internationally!

For those who are unaware, Central London is known to be one of the most attractive markets for foreign investors from West Asia, Russian and China and at the same time, a home in London is also regarded as a prized position and is must-have amongst the India’s upper class as well.

Some of the Billionaires who own a property in London include Pallonji Mistry, Kushal Pal Singh, Shashi and Ravi Ruia, along with Bollywood stars like Shah Rukh Khan and Ajay Devgn. Hence, selling properties in London certainly would have been a piece of cake for the Lodha Group.

Now clearly, their intents with the purchase were to build a strong base in London as similar to that in Mumbai and to convert the city’s commercial properties into luxury residential apartments.

Additionally, their entrance into the London markets also brought them into the big league of Indian realty and they were now being compared with the top three builders in the country, Hiranandani’s, DLF and Raheja’s.

Due to such successful stints; the group were also able to build a strong team of investors which included private equity funds and big bankers like JP Morgan, Deutsche Bank, HDFC Ventures, ICICI Bank and State Bank of India, etc.

But their largest project was yet to be unveiled!

And when you look at the group today, the Mumbai-based developer who started off as a lawyer in Jodhpur now owns a company which has more than 181 Million sq. ft. of land and is currently developing over 30 projects on over 35 million sq. ft. of it, in and around Mumbai. Additionally, the group now also employs over 3800 associates and 25,000 site-based workers as well.

Clearly, they have now become the biggest real estate developer in the country and looking at their growing stats, in a matter of 5-10 years they would also be having a prestigious name in the world market.

Talking about his political career; a six-time winner, Mangalji has played an active part in the Indian politics since an early age of 1995, and since then has also won all the elections from his Malabar Hill Constituency as well.

With a real-time net worth of more than $2.9 Billion, he is also known to be one of the richest men in politics. Being a legislator, Mangalji has brought about some magnificent developments in his home-ground. Some of his major political contributions include: –

Other than that; he also runs a charitable trust, the ‘Lodha Foundation’, under which he has taken numerous initiatives for the lesser privileged of the society to benefit them with education, healthcare, sports and culture, along with facilities such as medical treatment, vocational training, etc. to thousands of people.