What makes MailChimp so unique without raising a single penny! 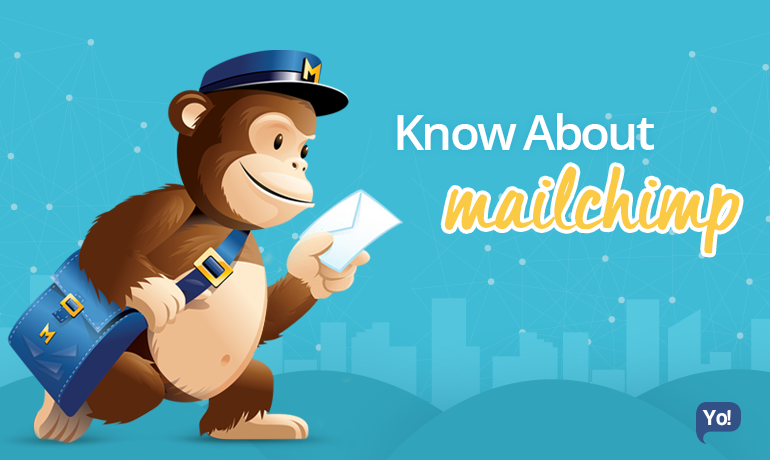 Founded in 2001, MailChimp is a simplified Email Marketing Software (EMS), which helps marketers with a number of easy options for sending bulk emails to clients, customers, and other interested parties.

MailChimp provides its operations to 12 million people and businesses across the world. It can be accessed through a cellular phone or web-based application, and downloading or installation of software is not required. They also have an offline application available.

To make things easier for users, MailChimp also offers a number of online resources (along with Knowledge Base and glossary of terms), also to provide help and insights about the available tools and features.

The main logo of MailChimp is a chimpanzee. To help promote the brand, the company, along with their website and their communications include a lot of humour and chimp related graphics.

Their features and integrations allow you to send marketing emails, automated messages, and targeted campaigns. And their detailed reports also help you to keep improving yourself over time.

They help you to create seamless newsletters of different types and then offer you with options for sharing them on social networks as well, giving you the feel of a personalized platform for publishing your newsletter.

You can also build a list of the people to whom you wish to market your products to, and save the same for future use as well. Additionally, to avoid rewriting of mails, you are also given the option of creating custom templates for your products as well.

Companies and/or People who regularly send across newsletters will find MailChimp to be of great help, as it not only helps them save their drafts and formats quite easily, but comes with a whole range of services as well.

They also help you track your results so you can check the responses that you receive from your clients.

Some of their offerings include: -

Additionally, they also offer – Powerful automation for online sellers, Complex and flexible API documentation, Data that works for you, and so on…

So this is how you’re supposed to start!!

First off – create a lean email marketing strategy with concrete goals. Once that is set, you can sign-up for MailChimp

MailChimp also helps you with all the support along with a step-by-step guide with any and everything that you may need.

Below, is the process to create an account with MailChimp: -

Talking about the plans they offer to its users: -

Starting Up: If you have 2,000 or fewer subscribers, you can send up to 12,000 emails per month absolutely free! No expiring trial, contract, or credit card required.

Growing Business: If you are a growing business, then go for this plan wherein for $25/ pm, you get features for professional senders, such as – marketing automation, targeting and segmentation, A/B testing, and team collaboration features.

Pro Marketer: This is an enterprise-level package for $25/ pm + $199 Pro subscription. Here, you get to monitor and improve your performance with enterprise-level powerful and flexible features like – customize your email marketing plan for your business, multivariate testing, comparative campaign reporting, and more.

What has been their Marketing Strategy?

After experimenting various strategies for years, the company had only managed to gain 85,000 paying subscribers by 2009.

That is when they decided to go with a ‘Freemium’ model, wherein MailChimp would not charge for the tools and special features.

They launched this free service on 1st September 2009 with a “Power to the People” campaign. To everyone’s shock, the number of users shot up 240% to 290,000 within just seven months. Emails sent had also soared from 200 million a month to 450 million.

Honestly, Freemium model was more of a marketing strategy than a business model! They were mainly using it to gain great publicity.

And from that point on, there has been no stopping or looking back, the growth has been absolutely amazing.  They were now doing an average of 3,000 new signups everyday by 2011.  This model also resulted in substantial momentum for our company, which gave them time for development, and also gained them a lot of tighter integrations with many mini-applications as well.

Having said that – with the freemium model also brought in abuse of the service by spammers. Spammers flocked to the free service. It was so much so that abuse-related issues had grown by 354%. The staff that dealt with such complaints also rose by 200%, and legal costs also jumped by 245%.

The real problem weren’t the “traditional spams” such as “get rich quick”, etc., they had Spam Assassin software to block those threats. The real problem instead was “fuzzy spam,” where the spammers disguised their efforts, making them much harder to detect.

That is when, MailChimp started Project Omnivore, wherein the company studied bad emails over the past eight years and found a way to create a “genetic optimization algorithm” to identify the traits of emails and accounts where abuses occurred.

But unfortunately the software crashed the company’s servers and never completed scans of 10 years’ worth of emails. Hence, they bought a Nvidia Tesla-based supercomputer, and completed the test scan in just two hours and showed the algorithm could predict bad emails accurately.

The simulation chewed up an enormous amount of computing time, sifting through more than 61 trillion examples.

Thanks to the success of the automatic software, the company then sent out 35,539 warnings, suspended 4,233 accounts, and shut down 1,193 users, in just about 7 months time. Thus solving the problem for good!

Ben Chestnut is the founder and CEO of MailChimp!

Born and raised in Augusta (Georgia), Ben is a BSID (Industrial Design) from the Georgia Institute of Technology and Physics grad from the University of Georgia.

The man has also been awarded with the prestigious “Ernst & Young Entrepreneur Of The Year” award by Ernst & Young, recently in June 2016

Although, very little is known of him, given his media-shy nature, but his LinkedIn profile shows that he had begun his career with Cox Interactive Media as a Designer in their Marketing Team in 1998 for roughly 2 years, and then further went on to work in a joint venture between Cox Interactive Media’s Cox Radio and MP3.com as Manager of their Web Team, to sell music from local artists for a year in 2000.

Anyway, that was his last stint. After quitting Cox Interactive Media, he founded MailChimp!

MailChimp – a company that was founded by two young and aspiring individuals in a pretty much “Un-Silicon Valley Way”, with no venture capital, no mad burn rate, and a lot more, have come a long way since then!

The founders have built this company slowly, gradually and organically (how companies ideally should), by anticipating customer’s needs and following their instincts.

If you’ve heard of MailChimp, then it’s either because you are one of their 12 Mn customers, or because you’ve been hooked on the blockbuster true-crime podcast “Serial” that MailChimp sponsored.

Having said that – MailChimp was never a fancy of Ben! Ben along with cofounder Dan Kurzius founded the company in 2000, at the peak of the dot-com bubble. This was just after they were laid-off from their jobs.

They used their severance checks to start a firm they called the “Rocket Science Group“, under which, they used to offer design consulting for large and small businesses in Atlanta.

After some time, some of their customers also started requesting to help them with ways to reach out to their customers by eMail. This led Ben to bringing to use some old code that he had used to create a failed online greeting card business in the past.

One thing led to another and MailChimp was formed! Since, one of his old greeting cards used to feature a drawing of a chimp, they decided to name the new email service – ChimpMail. But turns out – the domain name was taken, so he went with MailChimp!

For many years, they ran the eMail service as a side project to the main web design gig they used to do. It was only around 2006, that they began started to get worried about their web design business; it was not growing quickly, and they had lost the passion for it too.

They wanted to help small businesses grow. And eMail offered the perfect low-cost marketing channel for companies on small budgets. Hence, in 2007, they stopped doing web design and focused exclusively on MailChimp.

They had entered into a market that had larger and better-capitalized rivals, such as Public-listed Constant Contact.

MailChimp was itself a small business because of which it exactly knew what those SME’s wanted out of their marketing tools. They offered cheaper products with more features more quickly, and also it allowed greater customizations to fit customer’s needs.

Anyway, over the period of time, the company has grown from hosting 4 million customers in 222 countries, and 6 billion emails and tracks opens, clicks, purchases and other engagement from the recipients (monthly) in 2013, to accounting for 204 billion emails sent in 2015 (Some 42 billion of those were opened, with an ensuing 3.5 billion user clicks on article links, e-commerce offers and the like).

By now – by keeping themselves under the radar, slowly and steadily, and without ever taking a single penny in external funding or spending more than it earned, MailChimp has grown on to already account for $280 Mn in revenues in 2015 and is also on the track to top $400 million in 2016, and users now send more than a whooping billion emails a day as well. The company now also adds 14000 users a day as well.

The company that has always remained profitable is known for turning down offers from several venture capitalists. The company is wholly owned by the founders and now employs about 550 people, which would soon extend to around 700 as well.