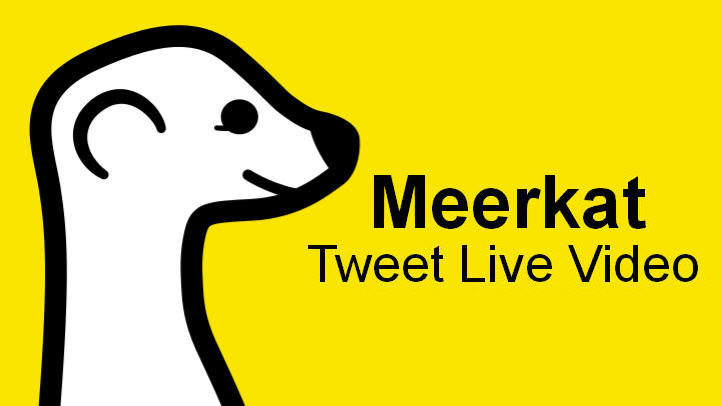 It remains a proven fact that anything that can be seen Live or while it is happening, has far more potential of selling than a recorded one!

And it makes sense too; I mean, wouldn’t a joke be funnier while it is being said than you or me repeating it later, wouldn’t a fight taking place in front of your naked eyes be more interesting than to watch a video of it?

Now there are many real-time / live streaming apps or sites available to capitalize on this aspect but quite frankly, none of them have managed to catch the eye of the masses.

On the other hand; Meerkat – a tiny new start-up that quietly launched on the 27th of February 2015, has effectively used twitter as a platform to gain immense popularity over the weekend itself.

It has taken the concept of broadcasting live videos, altogether to a new level!

To begin with; Meerkat is the prodigy of Ben Rubin – CEO & Co-Founder of Air which is a live-stream Start-up with a team of just 10 people.

Named after the midget, carnivorous member of the mongoose family – Meerkat is a live streaming video app that has become famous by standing on Twitter’s shoulders and using its identity, distribution, and communication systems.

Using Meerkat, one can start a live broadcast at any given point of time. This will trigger a tweet of the link to the stream and will also send a notification to any of the Twitter followers who use the app.

Otherwise, absolutely anyone can tune in on the web or through the app itself, and can put comments that are sent as Twitter @ replies. And, once the streaming is done, the video disappears unless you save it to your phone!

And streaming a video is pretty simple too! All you got to do is: –

Those who click on the link will be able to watch the Live Streaming, either from their Meerkat desktop or iOS app, and will also be able to interact with the host and other viewers.

Also, as people start to watch the stream, their Twitter profile pictures appear on the screen. So you can see who all are viewing or probably just say hi, and if your viewers send a tweet, that message appears on the screen itself.

What is even more interesting is that, those profile images continue to remain on the screen, even after they have shut the broadcast down.

Other than that; as posted on their website; there also are certain rules that need to be abided, it’s called; “THE RULES OF MEERKAT”

In about just a week or so, more than 8,000 users have tried out Meerkat and shared some 3,000 video streams with their followers. Also, the start-up that is backing Meerkat has raised more than $3.5 million, so far!

How Did Meerkat Begin?

“The real vision behind the formation of Meerkat was ‘spontaneous togetherness,’ or better put across as: “Can two people be together in the moment?”

And thanks to “Product Hunt” – the influential tech community, the now heavily popular “Meerkat” got the desired push, which turned Twitter into a live streaming platform!

Otherwise; the idea for Meerkat was primarily born out of Yevvo which was again a live broadcasting app that had launched somewhere in the mid of 2013. What appealed to Rubin was that Yevvo surprisingly had achieved more than 300,000 to 400,000 users.

Now although, it got cramped by lack of focus but it did motivate the founders to try harder and uniquely. This eventually led to rebranding of the same to “Air” which focused solely around broadcasting to friends. Its branch – Meerkat, by contrast, is based on a simple formula of broadcasting “one to many”!

Now it is pretty evident, that many other companies have tried and tested such a model; namely, Khosla Ventures-based one-to-one video streaming Sup, Betaworks Upclose, Snapchat, etc., but more or less none of them have got that desired hype or for that matter a decent amount of traction.

Whereas on the other end; surprisingly Meerkat is not doing anything different than the rest but still manages to get the “love”! Wondering why?

Twitter is one such platform that has out-beaten everyone in terms of popularity for broadcasting live videos!

And Meerkat has very smartly, jumped on the back of twitter and has used its user base for the benefit of theirs! To add to that; they have kept it pretty simple too. So if you happen to follow anyone on twitter, you will automatically be able to see them on Meerkat as well.

Because of such a simplified business model; all what Meerkat gets left to do is, solely focus on its quality – dead simple broadcasting, period! No complicated set-up, No extra-plugins required to be installed, No extra promotion because Meerkat auto-tweets, just add value to their content.

And the fact that; it has a real-time aspect attached to it makes it even more dramatic, which any 500 or 1000-word article would not be able to make!

This is one of the biggest reasons why Twitter itself is so interested in Meerkat; because this model of theirs one-ups Twitter on its platform & mission of “To give everyone the power to create and share ideas and information instantly, without barriers!”

Now at large; only time will tell if, Meerkat will become yet another addition to our already long list of tools of self-obsession or will it become a powerful tool for sharing intimate or newsworthy live events that happen across the world.