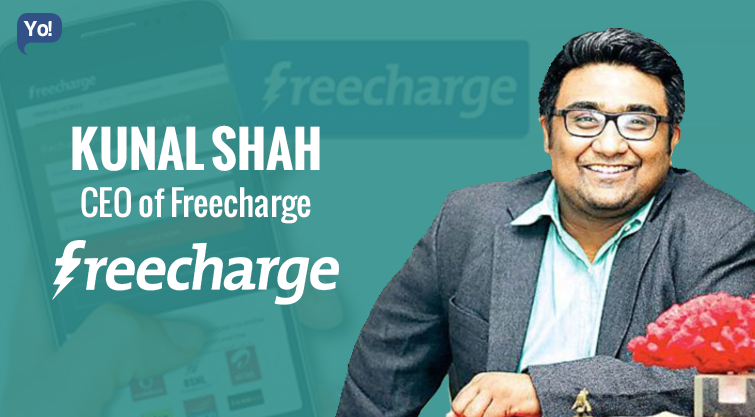 Born on the 20th of May, 1983; Kunal Shah is the Founder of one of India’s most Innovative business models – Freecharge!

Kunal was one of the very few who had the vision to see that, the term “Free” was one of the biggest myths of our times and this weak point of our masses was brutally being misused by many corporates to market their products as well. But what many people failed to understand was that there are no “free lunches” and that there’s always some ‘catch’ or ‘terms & conditions applied’ to it.

And in an attempt to solve a pain point that was not known to many; he started Freecharge!

Personally speaking; Kunal belongs to a business family which primarily deals in pharmaceutical distribution in South Bombay and is married to Bhavna Shah who is a freelance Graphic Designer.

An MBA dropout by choice from the Narsee Monjee Institute of Management Studies (NMIMS); Kunal has completed his Bachelor of Arts in Philosophy from the Wilson College in Mumbai!

Life as an employee…!

Just like many other successful entrepreneurs; Kunal’s journey also began at a very early age!

Soon after completing his graduation, Kunal went against his family trend of joining the family business and took up a job in a start-up BPO called TIS International Inc as a junior programmer in 2000.

The company that ran the BPO in Mumbai was called “Tandon Advance Device Pvt. Ltd.” and they were mainly involved in Healthcare insurance and Accounts Payable projects.

Around the same time, Sandeep Tandon – an investor in the start-up had come down from the United States, to take up a more active role in the functioning of the company.

Sandeep saw the way Kunal used to work and simply loved his energy. Sandeep could vision the potential the young boy held and quickly promoted him to the new Business Head. He worked there for a period of 10 years.

In this phase; Kunal with the help of Sandeep, grew the business to a 1200 strong outsourcing team.

Around the same time, Kunal also went on to start his very first venture PaisaBack in 2009, but more on that later…!

In 2010; Kunal could see himself ready to take the leap into entrepreneurship and conveyed the same to Sandeep. And instead of leaving him on his own, Sandeep invested in his company, thus becoming a co-founder and together they founded – Freecharge.

Life as an entrepreneur…!

While Kunal was working with Sandeep at TIS, the entrepreneurial bug bit him and he decided to try something of his own. But the question was what?

Now he was highly convinced with the concept of “Free” and wanted to capitalize on it too. And after a lot of brainstorming, the advertising mastermind came up with this brilliant business model which proved to be a win-win for all!

As a first, he formed a company called Accelyst Solutions Pvt. Ltd and under this company launched his very first venture – PaisaBack!

Formally speaking; PaisaBack was a web portal which used to run a retail cash-back rebate (refund) campaign management program by tying-up with some of the big online retailers of India.

Well, in simpler terms; PaisaBack had tied up with a large chunk of big online retailers in India and used to provide a certain amount of cash-back to its customers on purchase of any item through their list of tie-ups. Basically, they used to bargain high with thousands of top brands like Amazon, Flipkart, Snapdeal, etc, to get its customers the highest cash-back  and in return, these brands used to get huge amounts of traffic through their website.

– You can shop and pay as you would normally do so

– And done! You get the offered cash-back from PaisaBack within 4-12 weeks

The business model was so unique and ahead of its time, that it grabbed a lot of customers in no time and was making a decent 1-2 crores a year.

Now that the market was matured and ready, it was time to adapt to something bigger, better and more full-proof than PaisaBack! Enter – Freecharge….

Unlike earlier, he wanted to take the “Free” concept to another level, but this time he wanted a business model that had the capacity to solve the pain point of the masses! And while working on PaisaBack, he had stumbled upon the idea of Freecharge!

But during that time he was also working with Sandeep Tandon’s TIS too and with the idea of Freecharge in place, he decided to put down his papers.

Hence, in 2010; when Kunal could see himself ready to take a full-fledge leap into entrepreneurship, he conveyed the same to Sandeep. And Sandeep instead of leaving him on his own, invested in his company, thus becoming a co-founder.

Together they founded – Freecharge!

Freecharge again was formed under the wings of Accelyst Solutions Pvt. Ltd. wherein a part of the new venture was funded by PaisaBack and the rest by Sandeep.

Moving on; now that the company was formed, it was time to create the product!

During the same time; Naman Sarawagi (current founder of FindYogi) had written a guest piece on NextBigWhat. Kunal loved the insights mentioned by him around the recharge business model and hence immediately contacted him.

After a brief exchange of thoughts, Naman joined Freecharge as their 1st employee. Naman was given to lead the initial product management + feature decisions + development part (with only 1 engineer).

To sum it all; there was no serious tech that was built – everything was like how we Indian’s do it – ‘Jugaad’! In fact, most of the later developments were made after receiving customer feedbacks.

During this phase, they came across several hurdles, most of which were quickly averted also, but one of the major hurdles that they came across was that, big companies had a mindset which went against the concept of “free” and convincing such clients was nearly impossible.

This idea being entirely new, they had to go through a lot of efforts to convince them that this concept will not harm their brand in any way.

Eventually, some of these companies saw the benefits they could reap through such a model and the rest tagged along as soon as they saw others on board.

Other than that; those were the times when online payments were just picking up and the whole model behind it wasn’t that flexible too, hence, Freecharge also had to go through hard bargains when it came to payment gateway commissions.

There were also some issues related to integration of the payment gateways with their website as well. But anyway, these problems eventually faded and situations smoothened out!

Freecharge always very clearly knew that youngsters were their target audience and hence its marketing strategies were purely focused towards it.

In their beginning days, they reached out to the IIM’s and IIT’s to urge them to recharge through them. But as they were college students most of them didn’t have cards, so for them a person physically went there to recharge through his card, collected the cash from them and then handed over the coupons.

You won’t believe this, but their team had also created a fake Facebook ID with a random beautiful girl’s photos which obviously got thousands of friends. So now, one post of theirs reached to thousandsss & thousandsss! Apart from that, Freecharge also used every other technologically possible medium to spread the word.

Due to such strategies; Freecharge was covered by top notch websites like Pluggd.in, Trak.in, Alootechie, telecomtalk, Rediff, The Hindu, Outlook, and ET Now aired a story on them too.

And obviously, since then, their growth turned out to be so fast and viral that, within just a year, Freecharge got listed as one of the most promising technology startups from India by Pluggd.in (now: NextBigWhat) and to top that their staffing had also drastically increased to 35 members.

If that was not enough for you to digest then beat this; in November 2012, Freecharge proudly made a shout-out that they were doing an online recharge worth $ 6-million per day and roughly $ 2.19-billion a year.

By 2013, the company had successfully built their base in Mumbai & Bangalore and now had over two million active customers who contributed to over 50,000 successful B2C transactions per day.

But the icing on the cake was their most unconventional marketing sixer (if I may say!) which made them go absolutely viral.

In May 2013, Freecharge in association with TVF – ‘The Viral Fever’ (an online youth entertainment network), created a spoof on the then famous TV show Emotional Atyachar. With limited but more-than-enough attention, they launched this video on YouTube and believe me when I say this, within no time they had 1.5 million views.

Interestingly, the year of 2013 also saw an unusual turn in their events! Kunal who till now acted as the CEO of the company, announced that he was formally stepping down to take care of other planning and operational aspects like growing their merchant & client network, and had now appointed Alok Goel (Ex-COO of redBus.in) as the new CEO.

Many experts and guru’s believed this to be a wise decision, as Kunal’s forte lied in Planning, Ideation & Strategizing and execution was doing nothing but diverting his focus.

And proving that belief right; the company since then became far more structured & streamlined than ever and the numbers proved the same too!

By September 2014, the transactions through the mobile app had increased by 30x and now 70% of the business came from the mobile itself.

To top that, the company had also acquired Preburn & Wishberg and their respective teams were now working to build new referral programs of Freecharge.

Freecharge now had more than 10 million registered users and accounted to more than 400% YoY growth.

Apart from MobiKwik and PayTM; not even one company was even remotely close enough to compete with them!

And finally in April 2015; Kunal officially announced that Freecharge had now been acquired by Snapdeal for $450 million (over Rs 2,800 Cr), making it India’s largest startup acquisition deal so far.

The primary reason for the expansion was that; Kunal could clearly envision that this was a saturation point for him and, for Freecharge to further expand into wider markets without any restrictions he needed to be a bigger player.

A lesser known fact was that; Snapdeal’s co-founder Kunal Bahl and Freecharge founder Kunal Shah had been doing business together for many months before the acquisition took place and had gotten to know each other well too. Hence, there were no Investment Bankers, no protocols, etc; it was simply Kunal calling Kunal and the deal was done in 22 days!

More recently it has also been announced that Alok Goel would be stepping down from the position and will now be in charge of finding new business opportunities for the combined Snapdeal-Freecharge entity whereas Kunal Shah would again be taking over as the CEO after two years.