Krishna Kumar – The man, who gave professional certification a new definition, is the founder of SimpliLearn.com!

An Information Technology Entrepreneur at heart, Krishna has managed to transform SimpliLearn into the largest professional certification training company with a global presence, that has gone on to train over 500,000+ professionals across more than 150+ countries as well.

He has also been presented with some of the most prestigious awards, such as:

Soon after completing his Bachelors in Electronics and Communication from the National Institute of Technology (Karnataka) in 1999, Krishna joined Infosys as a Software Engineer, to assist them in software development and requirement engineering.

Within a year itself, he quit his job there to start his first entrepreneurial venture called – TechUnified in 2000.

TechUnified had been setup by Krishna and three of his colleagues who held 25% stake each, and didn’t have any investors. It had been initiated as a garage start-up, and was more-off a trial-&-error phase for them.

It was a Global delivery of TechUnified’s Products and Services, which had also forayed into world class products in the areas of Mobile Banking, Voice Banking and Telecom Self Care, etc.

Turns out, they had managed to out-do themselves by developing a customer base that included some of the fortune 500 Banks and Telecoms, and by around 2007, they were clocking an annual revenue of Rs.18 crores with profits worth Rs.7 crores.

In 2007, they sold the company to a public listed company called – Org informatics Ltd for about Rs. 49 crores.

Post this sale, in May 2008, Krishna started an online recruitment marketplace called – Zyoin, and also gave blogging a shot!

He had begun by sharing his ideas on project management and related areas on this WordPress blog on a part time basis, and had also created roughly 10­12 hours of video and had also given free training to about 3000 people without any marketing as well.

Now he didn’t have any plans at all for the blog, let alone forming it into a company. But to his surprise, the blog became popular!

People had started coming to him asking for more PMP (Project Management Professional) training in against for donation as well.

“That is he decided to make a formal business venture out of it, invested his own money, hired good people, and finally launched a company in 2009.

And since then, there has been no looking back for him!

What is Simplilearn.com? What is their Business Model?

They offer 24/7 online training, along with blended classroom training, and create a range of course programmes, exams and experiments to helps these professionals from across the world to get better job opportunities and higher salaries. They work with these professionals and companies too, to address their unique learning needs.

This unique blended model of theirs has created a niche of bringing together the best of self-learning and online training!

They offer courses majorly in three categories, and some of their offerings include: -

Along with a lot of Free Resources like Articles, Webinars, Videos, eBooks, SimpliLearn Community, etc…

All these courses are offered online only using ‘Self-learning and Instructor-led Classroom Models,’ and at the same time, a strict check is also maintained, to make sure that these offerings of theirs are upgraded continuously to ensure the latest industry requirements and best practices.

These experts are highly experienced professionals or long time teachers who hold a reputation of excellence, and make somewhere around Rs. 1,00,000 just by teaching on SimpliLearn. To ensure highly quality, SimpliLearn also seek reviews from students/learners about the instructors.

At this point, they have more than 2000 Qualified Trainers who offer more than 400+ professional certification training courses across 20 verticals.

And talking about their pricing – SimpliLearn follows a differentiated pricing strategy for different regions. For example – a Big Data course that costs about Rs. 20,000 in India would cost about $1,000 in the US.

To begin with – Education was, is and will be the one of the hottest sectors all the time, and with the rise of the online education industry, it is bound to get even hotter.

Adapting to the change, the corporate have also seen to be jumping onto the bandwagon. The Indian IT services sector is undergoing a sharp shift combined with a significant transformation, in the way business is done, mainly due to many clients demanding different kinds of skill sets as compared to the past.

But the gap between the demand for skilled workforce and availability still remains a huge pain-point for the companies. One of the most important reasons for the huge demand-supply gap remains the rapid change in technology.

They have already started embracing technologies such as social, cloud, analytics, automation, mobility among others, but the need for niche and specialised technology skills has become a desperate need of the hour.

It has been seen that, online learning has managed to remove various constraints and bottle-necks such as the physical presence of a teacher or learner in a classroom, or for that matter, their availability at a given time of the day.

Online is becoming the preferred mode of learning over offline education. Because of the convenience and cost effectiveness, a virtual classroom has also seen to be developing an increasing trend amongst the masses. This is mainly with regards to higher education and re-skilling.

On the other end – Globalization and the increasing need to remain competitive has driven the corporate professionals to look upto certification courses to upgrade their skills and enhance their employment prospects. But these working professionals prefer getting trained at their own pace and convenience.

This is a clear indication that classroom learning is on the verge of becoming a matter of the past, while online certification training is setting base to become the future of the education industry.

This need has led to dramatic rise of various professional certification training companies, and capitalizing on the same opportunity, SimpliLearn, with its own USP’s is targeting this Market as well.

Other than their unique business model, SimpliLearn uses various strategies to strengthen their base.

The objective of these is to rightly position themselves as a medium to help individuals transform their career through certifications or a certification destination, and also to send out a message of the benefits of getting trained and certified in various professional fields as well.

To achieve and maintain that, SimpliLearn has partnered with Bangalore-based advertising agency called – Propaganda to build their brand globally – online and offline. They would be working with them on external and internal branding on a national scale to make SimpliLearn the leading brand in the industry.

They have been performing heavy content-based marketing and online marketing via Google, Bing, Facebook, LinkedIn, and via e-mails. And on the offline end, they do billboard and radio brand campaigns in Bangalore.

Other than these, the company has been using every opportunity to create a global brand value for themselves and have been leaving no stone unturned.

In the first Nine Months itself, the blog managed to achieve a viewership of 3000 people in about 150 countries, which led Krishna to notice the untapped pain-point of the industry, and the immense potential that market help.

He realized that working professionals were in desperate need of training bodies to help them get certified.

Hence, in April 2010, Krishna transformed SimpliLearn with a “blended model” approach to Project Management Professional (PMP) training. It was a mixture of classroom and online training, to help professionals achieve the desired at their own pace and convenience.

And since then, there was no looking back for him!

In a matter of just 2 years, the company had trained over 20,000 professionals across 50 countries, and had managed to achieve a growth rate of 400%.

By 2013, the company had acquired a US-based SAP training organization, to add SAP training to its programs list, and was now also offering additional courses such as – Big Data and Analytics, Digital Marketing, Project Management, Quality Management, etc. 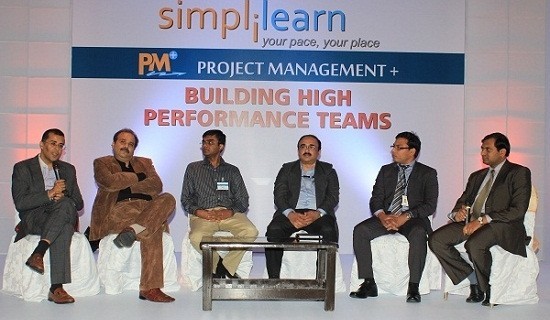 Their major market was the US and India, along with a good business coming in from Australia and the UK as well.

The numbers further increased to 75,000+ professionals across 150 countries being trained so far, and the company was also on the verge of reaching the Rs 100 crore revenue mark, by the end of the FY13-14.

From registering profitable numbers within their first year of operation, SimpliLearn has managed to unlock several milestones in a very short span of five years.

They have also gone on to be ranged #8 of the 50 most influential education brands outpacing Wharton University, Harvard Business School, New York University, University of Phoenix and other traditional institutions.

Today, they offer over 300 short-term courses across business, technology, marketing and creative domains, train 20,000 professionals every month, and roughly draw $2.5 million a month as well.

Over the period of time, they have also managed to bag some of the top-notch corporate clients such as  ​HP Bulgaria, Vodacom in Africa, Avaya, Pepsi in North America, Wipro India & TCS Europe, the Emaar Group from Saudi Arabia, etc.

More recently, they have also tied up with analytics software maker Tableau and their partnership is aimed at creating 200,000 data scientists in the country by 2020, through instructor-led training, e-learning, and industry projects.

And lastly, talking about their Equity Funding – SimpliLearn has raised a total of $28 Million from 3 Investors including – Kalaari Capital, Helion Venture Partners and Mayfield Fund.