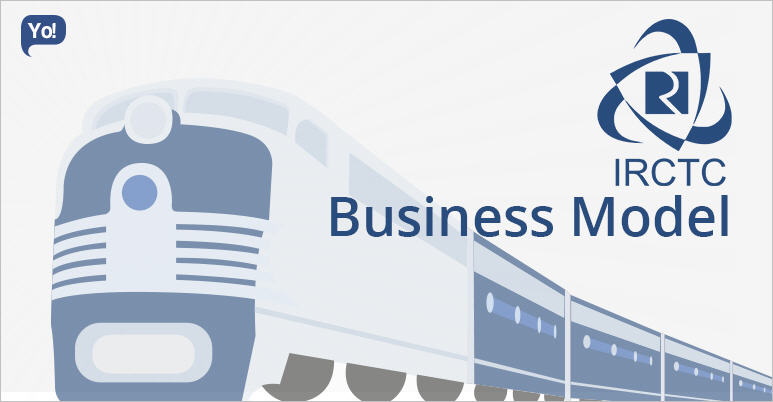 The Indian Railways (IR) was founded in 1853 and today, it proudly stands as the second-largest railway network in the world. IR is also known to be one of the largest rail networks in the world which spreads across over 100,000 kms. It carries more than 23 Mn passengers, and also accounts for over 12,000 trains, 7,000 stations and 72,000 miles of track.

Indian Railways is also known to be the world’s largest employer that also transports a mind-boggling 6 billion passengers annually!

In an attempt to modernize its functioning and along with a whole new range of modifications, extending the legacy ahead; the Indian Railways entered the digital world in 2002 with – IRCTC, Indian Railway Catering and Tourism Corporation. And today it has grown on to become not just India’s but also Asia Pacific’s largest e-commerce portal.

What Is ‘IRCTC’ And What Is Their Business Model?

Commenced in 2002; IRCTC or Indian Railway Catering and Tourism Corporation in abbreviated terms, is the subsidiary of Indian Railways, which as a whole manages the catering, tourism and online ticketing operations for the railways.

IRCTC has often been referred to as the marketing wing of the IR as well, which has successfully managed to change the complete look and feel of IR, along with the way they were serving their customers by offering all-round solutions.

It primarily had been setup by the Ministry of Railways with the basic purpose of boosting and capitalizing on the catering and tourism activity of the railways, and also to professionalise and upgrade these services with public-private participation.

But on a broader note, IRCTC has been initiated by IR to upgrade, professionalize and manage the catering and hospitality services of the system at stations, on trains and various other locations in general.

Other than that, IRCTC is also taking care to make sure that, the environment benefiting in some or the other way. In a similar attempt, IRCTC has launched – ‘Green Marketing’.

Beyond all that, to offer better services to its customers, IRCTC had also introduced their mobile app, some time back. Most of the services one may find on the website can also be availed using the app as well.

Due to its numerous advantages, the app has picked up really quickly and is now being used many as well. Some of the most basic benefits that the mobile app offers to its customers include – Convenience, Doorstep delivery, Easy to use, Secure payment gateway, Versatility and Payment options.

Anyway, as a part of the renovation and innovation, IRCTC has opted for a business model wherein it offers a range of services via website and mobile which include: -

IRCTC are the pioneers of internet-based and mobile phone-based railway ticket booking service through their website, and had initiated with the same in 2002.

‘E-ticket’ as the name itself suggests is the ticket that one books online, while ‘I-ticket’ is a service which is basically the same like regular tickets except that, they are booked online and delivered by post. The portal also caters to all kinds of other requests like Tatkal tickets for urgent booking, Concession tickets for senior citizens and students, Season tickets, etc., as well.

Over the period of time, they also launched quite a few programs for the benefit of the masses in general. Some of which included the loyalty program for frequent travellers called ‘Shubh Yatra’, and in an attempt to make it even more easier for the commuters to book e-tickets, they also launched a scheme called ‘Rolling Deposit Scheme’ (RDS), which allowed passengers to reserve seats against advance money.

Since the time of inception of IRCTC, they have opted for a dynamic marketing strategy of partnering with major tour operators and State Tourism to provide exclusive tour packages across the country.

To boost domestic and foreign tourism across India, IRCTC also arranges for budget and deluxe package tours, with options like ‘Bharat Darshan’, special luxury trains such as ‘Buddhist Circuit Train’ and ‘Maharaja’s Express’, etc. are offered depending on the package one opts for. One can also customise their tour as per their requirement as well.

Other than that, they also provide various adventure tourism packages that include water sports, adventure and wildlife treks, etc.

IRCTC has also recently introduced ‘station-based’ e-catering service at 45 stations, which will leverage travelling passengers to order food of their choice from leading private caterers to be delivered at these stations (not moving trains).

Going ahead; IRCTC is in preparations to set up around 100 budget hotels across all the cities that are known to be tourist hotspots, be it an international or a domestic tourist.

Basically, Tatkal scheme is where commuters can book tickets at short notice. Although, this scheme has always been there, but only after IRCTC introduced it under its wing, it has gotten a lot better.

Tatkal E-ticket on IRCTC can be booked for selected trains only one day in advance which excludes the date of journey. The booking for these E-tickets start from 10:00 am onwards for AC coach and 11:00 am onwards for NON-AC.

IRCTC not only helps the passengers or tourist with traveling tickets, but it also offers online hotel bookings and even cab booking options, to help make the journey even more simple.

Other than that, IRCTC also offers catering services to the commuters in ways like – Stationary passenger stalls, Mobile units or the pantry compartment, Base kitchens that supply food to trains, Food plazas, etc.

Additionally, in a recent development, IRCTC has also introduced ‘Jan Ahar’ that offers quality food at very reasonable price. Moreover, they have also partnered with a range of private food brands and food delivery entities to offer good quality and different variety of food.

IRCTC also provides pure drinking water bottles at all stations throughout the country by the name of – ‘Railneer’, at a rate as cheap as ₹12 per litre.

Even with the introduction of E-ticketing system, the user experience of IRCTC was still a nightmare, and was filled with problems which were pending to be tackled.

Some of the major issues the site faced included – Crashing at many intervals, extremely slow browsing and performance, unreliability, and many more…

On the other end – ‘BroadVision Inc’ was a provider of enterprise business portal applications based in California and working out of Bangalore. They used to run the IRCTC site on their e-commerce platform, and a huge challenge for them was the integration of the two systems.

While at it, they too faced huge problems like –terrible traffic jam on the site, crashing of payment gateways, near-to non-existent internet connectivity, etc.

Due to so many complaints of failed transactions and multiple bookings, they had to position extra people only to refund money, which costed about 20% of their total transaction.

Since, the system had become outdated and could no longer justify the growing demands; in 2013, the management decided to re-architect the whole e-ticketing system and hired CRIS -Centre for Railway Information Systems. Overall, they pumped roughly ₹6.5 crores.

CRIS added a completely new application along with the incorporation of a new technology to swiftly manage the new e-ticketing system, the huge recurring workload, balance the load during peak hours, and migration of 3 million users.

This application was placed on ‘Pivotal GemFire’, a distributed in-memory database which is part of Pivotal Big Data Suite.

The system was designed in such a way that each of its layer provided high performance, scalability, availability and a lot more at the backend, that would support the smooth functioning of the system smoothly.

And due to such great features, the system is now easily managing sales of more than 10,000 per minute and 150,000 per hour as well.

What Are The Business Strategies Behind Their Success?

Today, the success story of IRCTC is by far an inspiration for the entire collection of e-commerce portals in India. However, behind their success too lies a well-strategized business plan, near flawless execution, and a dedicated team.

Apart from the timing of entering into the dying railway industry, below mentioned are some of the main reasons why IRCTC was able to pull off the biggest profitable success in such a short span: -

What Kind Of Partnerships Has Irctc Entered In The Recent Times?

To begin with – IRCTC has partnered with a list of empanalled parties for premium trains, these include – ‘M/s Otik Hotels & Resorts’ (New Delhi), ‘M/s Tirupati Associates’ (Bhopal), ‘M/s Sunshine Caterers’ (Mumbai), ‘M/s Golden Caterers’ (Bangalore), ‘M/s PK Shefi’ (Chennai), and many more like such to manage different needs of the customers.

Other than that; IRCTC has also partnered with a range of other Internet companies for different reasons.

Since they do not compete with any of the online marketplaces in India, IRCTC has partnered with ‘Amazon’ for two years with an annual guarantee of ₹18 crore a year.

They have also partnered with ‘Foodpanda’, Online Food ordering platform to deliver food to passengers on train. Using Foodpanda’s aggregator model, consumers would be able to order meals of their choice from a variety of options. Customers will have the choice to order meals at least two hours in advance of the travel, and will also have various payment options.

Foodpanda would be deploying their own delivery fleet to fulfil all deliveries. In this initial stage, they would be starting with New Delhi Railway station, but will soon roll out the same for Mumbai, Bangalore, Pune and Chennai as well.

Next, IRCTC has also tied-up with ‘Hello Curry’ to offer in-train dining for passengers.

They have imitated this project at Secunderabad station, and will extend their services to other cities such as Delhi, Bengaluru, Vizag, and Pune in the future.

Other than them, IRCTC has also partnered with ‘PayTM’, ‘Vodafone’ and ‘Mydala’ as well. While, they have tied up with PayTM and Vodafone to use them as a payment option, through PayTM wallet and Vodafone M-Pesa (for mobile bookings of tickets), Mydala would be providing deals and offers to customers.

The major source of income for IRCTC is taking a ‘Service Charge’ on selling tickets, but largely speaking, the organization works on a ‘Commission-Based Model’ otherwise.

Their model is quite similar to online marketplaces in general, where their sales don’t actually include actual goods sold, but instead, they take commission from sellers and also make money from advertisements on their ecommerce sites.Other than that, IRCTC also makes money by online bidding options for banners in railway stations as well.

Talking about their profits – IRCTC was launched with a very small capital base of INR 20 crores, and had managed to make sales of only 27 tickets on the first day and 3,343 tickets in the first month. This was less than nothing.

This number drastically grew by 2009-10 when it sold more than 7.20 crore tickets, which further increased to INR 9.69 by the next fiscal year. By now they accounted for more than 45% of all visitors to travel websites in India and 19% of total Internet audience as well. And by 2013, IRCTC had about 6 lakh registered users.

They were also known to be the fastest growing e-commerce site in the whole of the Asia-Pacific region.

And more recently in 2015, the portal jumped up by 34% from last year and crossed the INR 20,000-crore mark or roughly $3 billion in terms of revenues through only online ticket sales. This was nearly a double the turnover of Flipkart – the largest online retailer of India.

What is even more interesting to know is that, unlike all other marketplaces which are still loss-making, IRCTC also posted an increase in their profit after tax (PAT) of INR 130 crores as compared to the figures of last year of INR 72 crores.

Overall, IRCTC also saw an increase of 19% or roughly INR 1,141 crores in their income, which mainly included income from tickets, sales of Rail Neer water, onboard catering services and licence fees from outsourced catering vendors, etc.