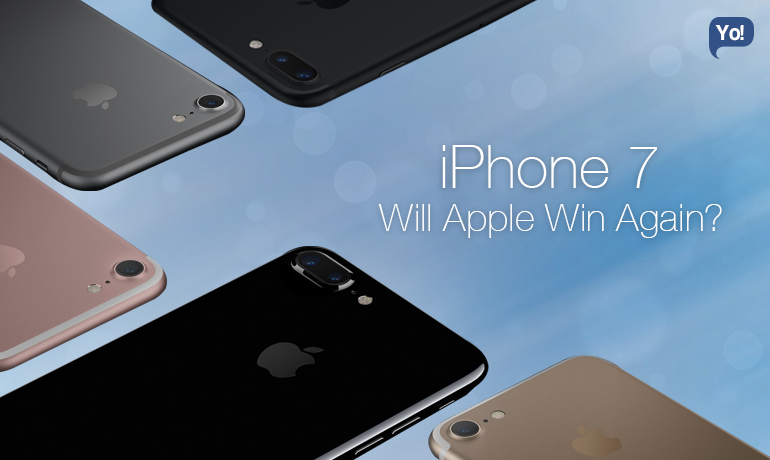 It was recently announced on the 7th of September 2016 that Apple Inc will be launching iPhone 7 and 7 Plus at the Bill Graham Civic Auditorium in San Francisco by its CEO Tim Cook.

Although, the pricing details for the Indian market haven’t been revealed yet, but it is being said that, it will be somewhere around ₹60,000!

Using the iPhone Upgrade Program, customers in the US, UK and China, would get access to unlocked iPhone 7 or iPhone 7 Plus, with the protection of AppleCare+. This Upgrade Program is available at apple.com and Apple Stores in the US with monthly payments starting at $32.3

Alongside the iPhone 7, Apple will also be unveiling, Apple Watch 2, and iPad Mini 5 and the iPad Pro 2 as well.

The iPhone will be coming in a gorgeous design in silver, gold and rose gold finishes along with two all-new black finishes, from apple.com, Apple Stores, Apple Authorized Resellers and select carriers. It is also water and dust resistant.

Unlike iPhone 6, this model does not feature a 3.5 mm headphone Jack, and has been replaced by a second speaker grill. Additionally, a Lightning to 3.5 mm connector adapter, along with in-ear headphones that use a Lightning connector, are bundled with the device. The Lightning adapter will also be sold independently.

It no longer uses a physical home button; but instead, it uses a touch and pressure sensitive button with haptic feedback via Apple Taptic Engine.

This model uses the new Apple A10 Fusion system-on-chip that also features a hexa-core graphics chip capable of “console-level gaming”.

It introduces a huge update to Messages that delivers more expressive and animated ways to message friends and family. It also gives Siri more power to do more by working with apps, along with new ways to interact with apps.

This is in addition to modifications to applications including: 3D Touch, Maps, Photos, Apple Music and News apps, and the Home app, simple and secure ways to manage home automation products in one place, and so on… Both phones include support for up to 25 LTE bands, for the best worldwide roaming in the industry.

Along with that, iOS 10 also opens up incredible opportunities for developers allowing them to do more than ever with the apps.

How is it different from other brands?

The iPhone 7 and iPhone 7 Plus have landed with some big differences between them and a few other models. Goes without saying – iPhone 7 will comfortably outperform its bigger brother (iPhone 6S), but where does it stand amongst the rest of the competitors?

What strategies have been adopted by Apple?

Have you ever wondered, “How in the world did Apple attain so much success, in such a short time?”

Clearly, they weren’t the first company to invent the personal computer, portable music device, the tablet, the smartphone, software to download music, or the set-top box to name a few.

Yet, they have managed to amass a brand loyal following that is backed by significant sales, market share, and profitability, like no other brand. The company has managed an unparalleled revenue growth from $8 Billion in 2004 to a whooping $180 Billion in 2014.

And not only that, but Apple has successfully managed to do this several times over. During the iPod, the iPhone, the iPad, and so on…

They have been creating revolution in the given space, time and again! Even after receiving strong criticism from the commoners.

They have successfully managed to move past beyond the “computer brand” label! As a matter of fact – Apple has created crazy fans that stand in line for hours and hours, just to get the first experience of any new product, the minute it’s released. They create products that their loyal fan-base believes make life better, easier, more fun and more cool for them.

They successfully transform their casual purchasers into brand ambassadors. And surprisingly, these secrets can be applied to just about any business in any niche or industry.

So, how does Apple do it? What’s the secret behind their success?

Out of the many strategies that they use; Consumer Behaviour insights and Emotions continue to be of prime focus of their branding strategy!

Beginning with Consumer Behaviour – even though Steve Jobs and Apple did not use the traditional consumer research methods in the initial development of most products; Consumer Behaviour plays a huge role in their marketing and ultimately the success of the company.

Consumer Behaviour research is the primary driver at the core of any good strategy, that helps with you actionable insight to ensure business success.

In the present business environment, Consumer Behaviour marketing is said to be one of the core competencies of any successful company. Once a consumer purchases a product or downloads iTunes, Apple gets access to customer data and they leverage from it to gain significant insight into the consumer and what drives their purchase behaviour.

Talking about Consumer Emotions – it starts with a “how an Apple product experience makes you feel?” They present themselves as all about lifestyle, imagination, liberty regained, innovation, passion, hopes, dreams and aspirations, and power-to-the-people through technology.

And goes on to making consumers believe that Apple is a really humanistic company with a heartfelt connection with its customers and their brand personality is about simplicity and the removal of complexity from people’s lives, that has people-driven product design.

All of these help them to thoroughly analyze their consumer’s behaviour more effectively and tailor their products and brand messages accordingly. And using these qualities; Apple positions itself as being extremely helpful to people (and businesses) as they strive to achieve their goals.

They create a consumer environment (that is based on the social and physical attributes of the world around including: spatial relationships, physical objects, and the social behaviour of other individuals) to position themselves. This includes creation of Apple Branded Stores, Digital/Mobile Environment, How Apple Communicates, etc…

And this is how, Apple uses Consumer Behaviour and Consumer Emotions to win its customer!

In sync with the aforementioned – Apple uses many Above the Line (ATL) and Below the Line (BTL) advertising strategies to promote themselves.

ATL advertising is where mass media is used to promote brands, and BTL advertising is more of one to one, and involves instruments like – distribution of pamphlets, handbills, stickers, promotions, brochures placed at point of sale, etc…

But, since they are targeting the premium segment, the presence of Apple iPhone is higher in the ATL segment than in the BTL segment.

Their ATL’s usually include – Whenever a new phone is being launched, all you will see is iPhone, just about everywhere, on each and every platform. Promotions strategies would range from full front page ads, promotions on the radio, the television and so on, during the launch of the product. There are whole websites devoted to nothing but Apple products and Apple marketing. Even high-end journalistic publications like ‘The Atlantic’ write endlessly about the company, dissecting what it does and how it does it. Along with these, include their interesting taglines for the new phone in the newspapers.

And for their BTL’s (which although is very low) – iPhone uses out-of-home advertising, along with hoardings and point of sale advertising at major retail outlets, and various forms of sales promotions and exchange offers, as well.

Lastly, to sum it up – Apple has majorly used the following strategies to become the #1 company in the world: -