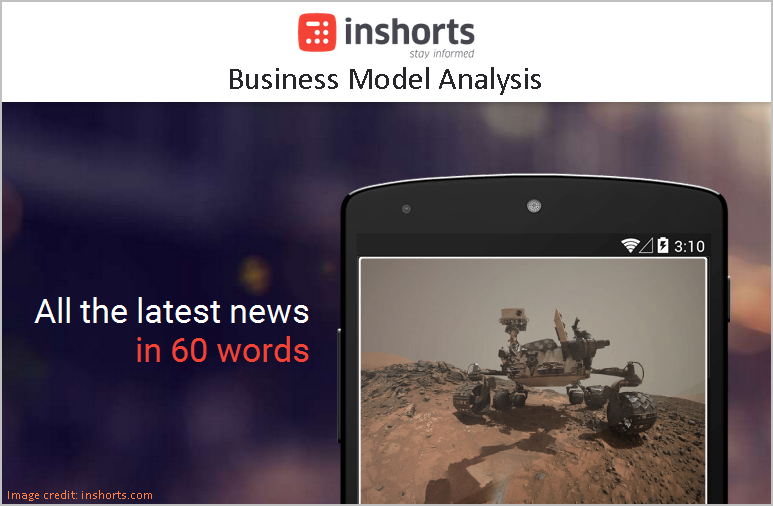 Founded in 2013 and headquartered in Delhi, InShorts (previously known as News In Shorts) is a Delhi-based company that is known for its content discovery and distribution.

Simply put – InShorts aggregates news and mostly all other types of content such as videos, Infographics, and blogs, and summarizes them in 60 words or less, which contains only the essential facts with an aim to keep the readers aware about current affairs, without eating much of their time.

They work on a simple concept wherein they provide all the necessary information related to one article, that too, within just one screen space. This information or content is not created or owned by InShorts, and belongs to partnered sites that are not owned by them.

These articles are collected and edited by their professional in-house editors, who make sure that the stories contain only headlines and facts, that hold no opinions and only the most relevant and unbiased information is used.

And if readers wish to read the entire story, they can do so by clicking on the link on the bottom, which then leads to the publisher’s website within the app.

All they do is – select the latest and best news from multiple national and international portals, summarise it into 60 short and crisp words, and personalize it for the individual audience.

This information is available in to all the users on Android and iOS, and in English and Hindi languages as well. At this point – InShorts generates somewhere around 140 stories a day.

Some of their categories include: All News, India, Business, Sports, World, Politics, Technology, Start-up, Entertainment, Miscellaneous and Hatke.

InShorts also has a content recommendation engine within the app, which empowers ‘My Feed’ section – the default news feed for its users, to analyse the content consumption behaviour of the reader and accordingly serve them most relevant content based on their interests.

Some of their features include: -

When they were in college, they noticed that the youth was increasingly disconnecting from the current affairs and the everyday news. Most of their friends had either stopped reading newspapers or were followed the social media for all the news.

One of the many reasons to that was – the current generation, the young people were highly impatient and in a hurry. Additionally, the news space had become highly cluttered, lacked simplicity, and had just become a form of entertainment.

The modern world is fast paced, and large chunk of people are moving to shorter formats of news consumption. They also noticed that a common human nature is that, they read the first few sentences of any news item and mostly, choose to skip the rest of it.

Hence, they decided to keep the news short and target the youth of today, more specifically, the age group between 18 to 24 years.

What Kind Of Strategies & Partnerships Have They Adopted?

Other than that, more recently, they have also partnered with Cheil India to build the brand InShorts.

Talking about their strategies….

Overall, their strategies keep changing depending on the situation, time, target audience, demand, and various other factors. They believe that, every medium has its strengths and weaknesses, the trick is to make the best of what you have.

But generally speaking, InShorts mainly makes heavy use of Social platforms to promote themselves. The focus or rather aim of their digital marketing strategy is to capture the user on its mobile device.

They have been using Instagram for driving app installs too. Some of the platforms that they make use of includes – Google, Facebook, Twitter, and recently, they have also started giving high importance to Instagram.

Their major target audience i.e. the age group of 18-24, spend a huge amount of time on Instagram, and additionally, since Instagram is a mobile-based platform, it becomes apt for them to run App Install Ads on Instagram too.

And going by their words – with a higher retention rate, the initial results have been very encouraging for InShorts, and have also been getting great returns in a very short time too.

Hence, Instagram seems to be the perfect match for InShorts to promote themselves! Although, for now, their main focus is at driving app installs through Instagram, but this may diversify in the future.

InShorts was founded by two IIT dropouts – Azhar Iqubal and Anunay Arunav, along with Deepit Purkayastha. Today, together they manage a team of around 60 people.

To give you an overall gist of all three – Azhar and Anunay, both belong to IIT Delhi and had dropped out in their 4th year, to pursue their dream of InShorts. Whereas, Deepit belonged to the Indian Institute of Technology (Kharagpur) and chose not to dropout, and went on to complete his Bachelors and Masters in Computer Science & Engineering.

All three of them, did not hold any professional experience, other than the internships that they did during their IIT days.

Post which, together they started InShorts (earlier known as News In Shorts) in 2013! Today, Azhar acts as the CEO, Anunay acts as the COO, and Deepit works as the CSO of the company.

During their days at IIT, one thing they specifically noticed was that, the youth of today was gradually disconnecting from the current affairs and the news, for various reasons, one of them being the length of the articles. Hence, with an aim of keeping people informed and updated, the trio had launched a Facebook page in 2013.

This was one of those few start-ups, which was the easiest to setup. Unlike other start-ups who took months to get started, they were up and running in 3 days flat.

In just about 8 days, their Facebook page had gained about 1,000 likes, which further increased to about 20,000 likes by the end of the month.

Their network (friends and family) and the IIT community had played a key role in spreading the word. Seeing this overwhelming response, it was evident that people liked their idea.

Hence, without further ado, they quickly launched an Android app in September 2013 and called it ‘News In Shorts’.

In 2014, they had also been shortlisted for the third batch of Nasscom’s 10,000 Start-ups program; post which, they got incubated at Times Internet-backed TLabs.

By now, they had gained more than 10,000 downloads (which further increased to 100,000 downloads by the end of the year), and had also been approached by and received funding from Sachin Bansal and Binny Bansal (Co-founders of Flipkart), as well.

What was even more commendable was that, within a year since their launch, these entrepreneurs had also entered into the Forbes list of ‘30 under 30’, and had also received the award for the ‘Best Innovation App’ by the Internet and Mobile Association of India (IAMAI) as well.

By the 2nd year i.e. by 2015, they were catering to more than 2 million users and had also become the highest-rated news app on Google Play Store. They had also launched the iOS version of their app and were receiving over 10,000 downloads per week.

In 2015, they also rebranded from “News In Shorts” to “InShorts”. Part of the rebranding also included expanding the content beyond just news aggregation, to adding videos, Infographics, and blogs as well.

Later in October 2015, InShorts also acquired Betaglide, a business that was incubated in TLabs along with them. Betaglide was the creator of Retention.ai, which primarily worked on tracking uninstalled users, finding possible reasons for un-installation and ultimately decreasing user acquisition cost.

More recently, they have also launched an exclusive community for the ‘power users’ of the application called – ‘Insiders‘. These power users would get a first-hand experience of all new features that InShorts would develop in the future.

Today, the app has received more than 3 million app downloads on Android and iOS, and that Facebook page has transformed into a full scale Rs. 600 crore company! To reach where they are, they have raised a total equity funding of about $24 Million from 5 Investors including – Binny Bansal, Lee Fixel, Rebright Partners, Sachin Bansal and Tiger Global Management.