The hidden angle of Ibibo acquisition by MakeMyTrip! 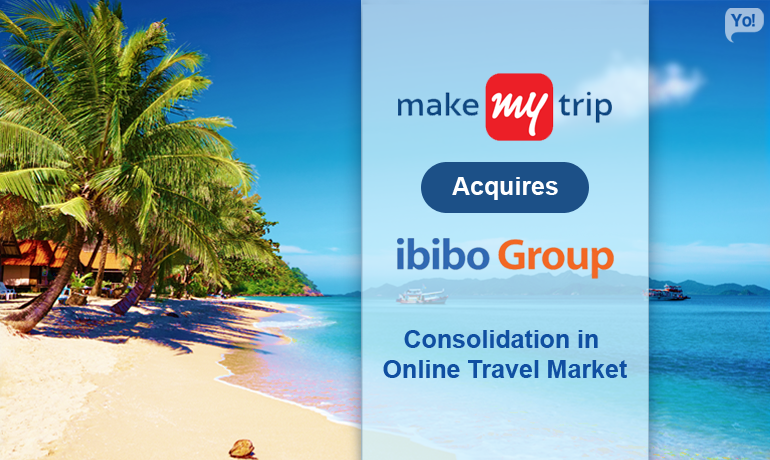 It was recently announced earlier this month, that two of the biggest OTA’s of India – MakeMyTrip and Ibibo Group (owned by Naspers Limited), had agreed to combine the two businesses under MakeMyTrip, and making one grand entity!

Through an all-stock transaction that is valued somewhere close to $1.8-2 Billion making the transaction worth approximately $720 million; the acquisition of Ibibo by MakeMyTrip will be marked as the biggest acquisition in India’s online travel space, in which, MakeMyTrip shareholders will end up owning 60% and Ibibo shareholders will get a 40% stake in the combined entity.

Ibibo was earlier 91% owned by Naspers and 9% owned by Tencent, and will now be a 100% part of MakeMyTrip, and post this transaction , it will also make Naspers and Tencent the single largest shareholder in MakeMyTrip.

The deal will also see China’s Ctrip’s commitment of $180 million (about ₹ 1,200 crore) in MakeMyTrip through convertible bonds, turning into equity with a stake of around 10% in the merged entity.

Following the closing of the transaction, Founder Deep Kalra and Co-founder Rajesh Magow will continue as the Group CEO & Executive Chairman, and CEO India of MakeMyTrip, respectively, but Ashish Kashyap (Founder and CEO of Ibibo Group) will join MakeMyTrip’s executive team as a Co-founder and President of the organization.

The acquisition comes a little over three months after rival Yatra.com agreed to be acquired by Nasdaq­listed Terrapin 3 Acquisition Corp (a special purpose acquisition firm) in a reverse merger deal, with an enterprise value of $218 million.

The transaction is expected to close by the end of December of 2016, and is awaiting approval by MakeMyTrip shareholders and regulatory approvals.

Shares of the loss-making Nasdaq-listed MakeMyTrip had jumped by nearly 46% to $29.75 (20th Oct), valuing the company at about $1.2 billion.

What will be the focus of the combined entity?

The combination will bring together a bunch of leading consumer travel brands that includes:  MakeMyTrip, Goibibo, redBus, Ryde and Rightstay. Together, these brands had processed transactions worth 34.1 mm during FY2016.

It will command more than 50% of the OTA space, leaving the rest for other players like Yatra and ClearTrip.

Additionally, the merged entity also claims to have a total of 80,500 hotels across the two platforms, with gross room bookings of 50,000 room nights per day.

But all the companies will be functioning, as they are. Keeping the focus where it was. RedBus would continue to focus on bus ticketing. MakeMyTrip will stick to Holidays, air ticketing and the 3-5 star hotel space. And Goibibo will continue with the budget hotel space and their recently released goCars and goContacts.

Overall – the focus of the combined entity will be on getting people to move from offline booking to online booking, given that the online travel penetration remains extremely low at about 15% for the accommodation industry and 18% for the organized bus industry in India.

Given the stature of the deal, what are the problems they could face from the Competition Commission of India?

No! There won’t be much of hassles from their end, simply because, CCI is concerned with two things: “Pricing Power” and “Market Share”!

Pricing power is nothing but getting an undue amount pricing power from the consolidation, which isn’t the case here. In air ticketing, even though they potentially hold the largest share, pricing is still done by the airlines, and they’re only resellers, with at most a convenience fee. The same applies to hotels and chains.

The other thing that CCI looks at is market share. The size of the travel market in India is about $30 billion. So even if you put together their entire combined company, they don’t hold more than a 10% of the overall market share.

How is the end-user at loss?

Even though, the transaction is expected to unlock value for customers, supply partners and shareholders, by combining the complementary strengths of each business, which includes: the strong brand, robust mix of domestic and outbound hotels and packages business and strong position in the air ticketing business of MakeMyTrip, and a strong presence of ibibo Group through goibibo and redBus in various fast growing travel segments including hotels, bus bookings and air ticketing ––– overall, the end-user will be at loss.

Simply because – Competition is always better for the end user, where companies end up fighting with each other for acquiring consumers and incur heavy losses for every transaction; and customers on the other end, end up with discounted products and services.

But consolidations are bad for end-users! Imagine – Flipkart and Snapdeal come together. Since they won’t be competing with each discounts will take a back seat.

Hence, this acquisition is bad for users!

It will reduce OTA price wars (primarily fought between MMT and goibibo), and reduce the discounts and pampering that customers were getting.

MakeMyTrip: – MakeMyTrip Limited is the parent company of MakeMyTrip (India, USA and UAE), Luxury Tours & Travel (Singapore and Malaysia) Sdn Bhd, the Hotel Travel Group (Thailand) and the ITC Group (Thailand). Some of their services and products include: air tickets, customized holiday packages, hotel bookings, railway tickets, bus tickets, car hire and facilitating access to travel insurance. Some of the websites that they operate, include: www.makemytrip.com, www.hoteltravel.com and www.easytobook.com, etc. The Company provides access to all major domestic and International airlines operating to and from India, over 33,000 hotels and guesthouses in India, more than 310,000 hotels outside India, Indian Railways and several major Indian bus operators.

Naspers: - Founded in 1915, Naspers is a global internet and entertainment group and is one of the largest technology investors in the world. It was founded in 1915 and runs some of the world’s leading platforms in internet, video entertainment, and media, in more than 130 countries and markets that have long-term growth potential.

Some of the ventures that Naspers has invested in, acquired or built, include: Allegro, Avito, Brainly, Codecademy, eMAG, Flipkart, letgo, Media24, Movile, MultiChoice, OLX, PayU, ShowMax, SimilarWeb, Twiggle, Udemy, and so on… They also hold a stake in Tencent, which is a part of the deal.

What does this mean for the Online Travel sector?

The early phase of any sector begins with a lot of bang and enthusiasm in terms of number of players, but soon realisation also sinks in, and then such M&A’s happen.

India today is the next big internet market, and the travel marketplace in it, is known to be very competitive. It requires immense cash burn. Their strategy usually is to become bigger and leaner.

But lately, experts are of the opinion that the OTA space has become cluttered, with everyone burning up cash in deals and offers, and incurring huge losses.

The consumer internet segment, which also includes the eCommerce sector, has witnessed a range of large and small M&A’s this year. This also includes the cashless kind of merger, focused on getting the talent, generally termed as acqui-hire.

Having said that – these developments are at the backdrop of the slowdown in funding for the sector! According to a report by VCCEdge, venture capital investments has seen a steep decline of 39% in terms of number of deals and 58% in terms of deal value since the last nine months ending September 2016, and private equity deals, which saw a drop by 37% have also witnessed a similar trend.

To add to that – even while the biggest deal in India’s online travel aggregation space signals a sign of maturity in the sector, and also provides an exit path to the investors; these equally are challenging times, as even the large companies are struggling to raise fresh funds.

This only proves that – the investors are now looking for profitability and sustainability of business. Making consolidations inevitable!

We can now expect a robust M&A scenario in the near future, with deals aimed at achieving market share, growth goals, and in attempts to claim the top spot.