Everything you need to know about Google Allo! 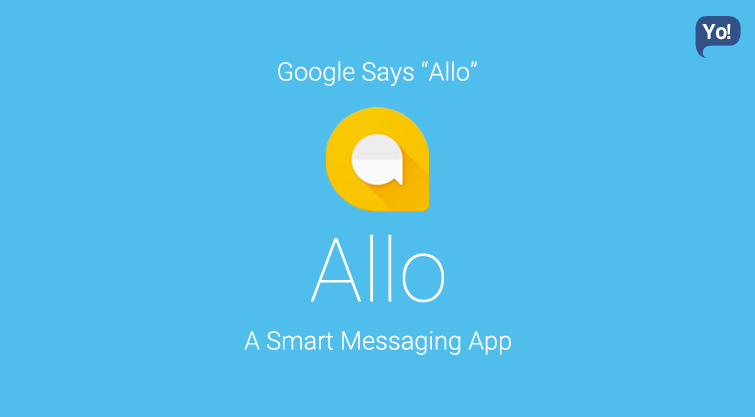 As we have been seeing, Google seems to hold some kind of fascination towards communication apps, many of which have successfully managed to fade into Google history.

Having said that – they seems of have cracked the code this time, and have launched their very best – Google Allo!

What is Google Allo?

Announced at Google I/O (18th May 2016) and launched on the 21st September 2016 – Allo is Google’s smart instant messaging app that includes a virtual assistant and a “smart reply” function that allows users to reply without typing. It has been made available on both the platforms – Android and iOS.

Allo makes use of artificial intelligence, machine learning and Google’s natural language processing advances from their search to help you with your queries.

Interface being Google’s forte, given that it is known to keep the interface of all its products user-friendly; they have also kept the overall interface of Allo pretty basic and seamless for any user to get acquainted to.

Having said that – NO, this is not Google’s replacement for Hangouts. And although, you can’t set it as the default SMS client on your phone, but it does offer the ability to message a contact that doesn’t have Allo installed, helping you to talk to contacts over SMS, with the message being routed through Google’s servers. But Allo isn’t an SMS service by design, that’s as far as one can go! It is similar to the likes of WhatsApp, iMessage, Facebook messenger, etc…

The registration signup and account creation of Allo is very simple, very similar to WhatsApp, in fact. A few basic self-explanatory steps, and you’re ready to use the app!

What sets Allo apart from iMessage, Facebook and WhatsApp?

Allo, as you must have heard, comes with a whole range of features, some of them being: -

A crucial difference between Allo and the messaging apps offered by Apple and Facebook is its virtual aid – Google Assistant that can answer questions and make suggestions.

A virtual assistant chatbot – Google Assistant is Google’s way of offering Siri-like experience for all the Android users!

Although, the chatbot is still in its preview phase; suggesting replies in conversations, offering recommendations on nearby points of interest, telling bad jokes, playing games with you, etc are some of them any features that it comes with!

While many texting apps and keyboards can suggest words as you type, in the form of auto-correct, but Allo goes a step farther by offering up full replies based on the message you’ve just received.

There are two ways to interact with Google Assistant: First – In a messaging thread, you can call out to Google Assistant at any time by just typing “@google” in Allo, even during an ongoing conversation, without leaving it. So for example – if you and your friend are making plans to go for a movie, you can just type @Google and then your query in the same chat window, and the results shall be up without having to leave the chat.

If a sibling sends you a family photo, Allo might suggest something like “Aww!” or “How cute!” in response! These suggestions are on point and natural-sounding.

And second, you can chat with Google Assistant one-on-one as well, to set alarms, ask questions, jokes, news, to remember information, and so on…

With Allo, you can also hunt for nearby restaurants and browse movie times without leaving a text conversation, but you can’t book a table or buy tickets for now.

Google Assistant adds a lot of convenience to texting by making it easier to retrieve information without having to juggle multiple apps.

It also has an Incognito feature for private chats, with end-to-end encryption. It also comes with an expiring chats option so you can control how long your messages stick around; a one-of-a-kind self-destruct option, indeed!

Additionally, it can also get into your Google account, and perform several tasks, such as – reaching into your Gmail and show you mails, meetings scheduled on Google calendar, perform Google search, and so on….

Unlike Google Now, interacting with Google Assistant feels more personal and conversational!
And this artificial intelligence-powered feature is what makes Allo different than WhatsApp, iMessage or Facebook Messenger!

Where is Google heading with Allo?

Plenty of Google projects have been targeted towards India: Android One phone (Google’s cheap, high-quality Android phones) was first launched in India, they started a free Wi-Fi program by installing high-speed access points across most popular train stations in India, they launched a custom version of YouTube called “YouTube Go” that is designed to be “offline-first”, for India, and if that’s not enough proof, then read the op-ed recently published by Pichai in The Economic Times of India that clearly explains how Google is heavily targeting India.

Now the next most obvious question that comes to mind is – Why?

Well, as most of you must be aware – Google is all about scale and having huge numbers of users! Now if you look at the top three countries with the most population, it’s China (1.38 billion people), then India (1.32 billion people), and then it’s United States with (324 million people).

If Google inclines towards China that would mean dealing with the censorship of the Chinese government, leaving them with the next best option i.e. India. In addition to that – India is also the home country of Google CEO Sundar Pichai.

According to data from Dutch research firm TNS Infratest (March 2015) PC usage in the US and UK were both around 75%, whereas, the PC usage in India stood the second-lowest amongst 59 countries, at just 15 % percent.

Goes without saying – in India, the dominant computing device—now and in the future—is the smartphone!

Now, all this does not necessarily has to be wrong!

The one-device limitation may be a deal breaker for many in the developed world, but it’s quite normal in India. And quite honestly, it can be a boon for the companies as well, simply because––to be successful in the US and UK, they would need to support multiple devices, but not in India. It’s just going to be one device here!

Coming to the topic in hand – Allo, clearly is an India focused product, given Google’s decision to not give Allo a Web or desktop client.

This gets validated furthermore, when you notice how Google has smartly played with their signup process! What they have done is that – to sign-up or sign-in for Allo, you don’t need to have a Google account, but instead, you “sign up” using the carrier’s cell phone number. Similar to WhatsApp!

Even if you’re a first time internet user via your smartphone, you probably won’t have an e-mail account or a Google account, but you definitely will have a phone number, since that’s how you’re paying for Internet service.

Some more evidence to prove Allo’s focus towards India is that: Allo was first launched in India, and almost half of the Allo sticker packs are by Indian artists, and many have Indian themes like “I <3 India” and “Modern Parivar” as well. Moreover, Google just also announced that Google Assistant will soon be learning a second language (Hindi) after English.

Hence, all of these points clearly prove that Google is heading on create a suite of mobile products that are interconnected to each other, and are focused and targeted towards the ever-growing Indian audience.