Univision Communications Acquires Gawker Media: The Inside Out Story! 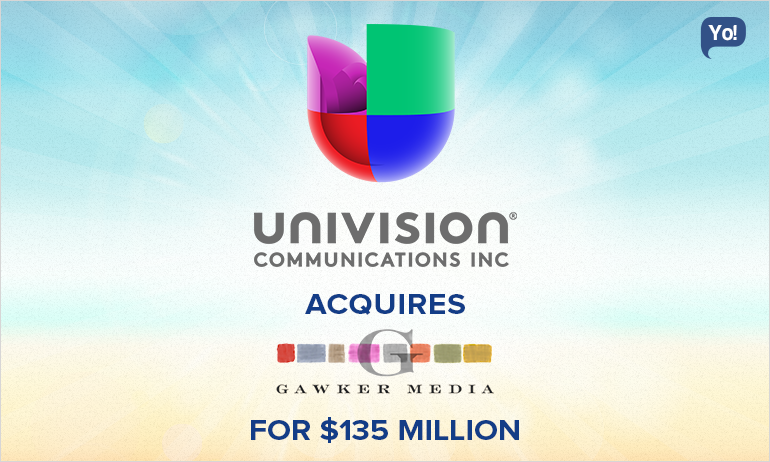 Univision Communications Inc (UCI) today announced that it had entered into an agreement to acquire Gawker Media Group, as part of its bankruptcy proceedings.

The deal will be accounted as an asset purchase which includes the following platforms: Gizmodo (Gadget and technology lifestyle), Jalopnik (Cars and automotive culture), Jezebel (Celebrity, Sex, Fashion for women), Deadspin (Sports), Lifehacker (Productivity tips) and Kotaku (Video games and East Asian pop culture), but not its flagship site Gawker.com, which will be ceasing its operations soon because they have not been able to find a buyer for it.

These assets are going to be integrated into Fusion Media Group (FMG), which is UCI’s division that serves the young, diverse audiences in America.

The deal will also allow most employees to keep their jobs, but the founder of the company Nick Denton, will be removed.

Post the completion of this strategic acquisition, with the help of Gawker’s nearly 50 million readers per month, FMG is expecting its digital reach to rise to nearly 75 million unique visitors, or 96 million unique visitors when including its extended network. Additionally, it will further extend their content offerings across the verticals of Gawker, as well.

Hence, going ahead – with the help of these newly acquired digital-first media assets, FMG will keenly be focusing on catering to USA’s diverse youth with their digital-first brands.

The sale is the direct result of Gawker’s defeat in a lawsuit against Wrestler Hulk Hogan a.k.a. Terry Bollea, who had sued Gawker Media violation of his privacy as they had published a clip of a sex tape featuring Hogan.

That’s also one of the main reasons why Gawker filed for bankruptcy in the first place. They didn’t want Hogan to collect the money, and this led to Hogan reaching to a place, where it now had to negotiate a settlement. Which it always wanted!

The sale has already been approved by the federal bankruptcy judge Stuart Bernstein and is within the 14-day window of appeal phase wherein the unsecured creditors, such as Hogan, can appeal the sale, post which, the secured creditors like the Silicon Valley Bank, will be paid out immediately, followed by the lawyers, bankers handling the sale, “priority claims” (such as corporate taxes), and then finally, the long list of unsecured creditors of which: Terry Bollea, being the largest.

Having said that – post the sale of the assets, Gawker still plans to appeal that $140 million verdict in a higher court.

And as far as the founder Nick is concerned –– he plans to work to make the web a forum for the open exchange of ideas and information but will stay out of the news and gossip business.

Eight steps to the fall of Gawker…!

Gawker media that was founded in 2003, started with its fall in 2010! Since then, the company has been at the center of controversies, not just to report it, but have been the ones to be a part of them. Eight of such phases have led to its ultimate demise.

In 2007 – Gawker had published an article “Peter Thiel is totally gay, people” written by Owen Thomas.

For the unawares – Peter Thiel is the billionaire co-founder of PayPal and one of the most active and largest VC in the world, who also happens to sit on the Board of Facebook, as well. This article infuriated Peter so much that he went on a 9-year revenge spree, and made sure that Nick along with Gawker Media was destroyed.

In 2010, all the commenter accounts (1.3 Mn) at Gawker Group along with their entire website source code were hacked and released by a hacker group called Gnosis. Thus, raising questions about their security and credibility!

In 2011 – Gawker decided to revamp all their media sites, which led to a major design change that went on to include user experience more like that of television, allowed for users to create their own discussion pages, on Gawker’s Kinja, and a lot more.

What was being seen as an effort to increase the engagement of site visitors, turned out to get disliked by many and failed to bring in traffic. Page views after the redesign had declined significantly. 80% decrease in overall traffic, to be specific!

To fix this – although, Gawker began giving visitors the option to choose between the new design and the old design for viewing the sites, but what’s gone was gone! They weren’t able to retrieve their old number.

In 2014 – Actor Quentin Tarantino filed a copyright lawsuit against Gawker Media for distribution of his 146-page script for The Hateful Eight.

In 2015 – Gawker was sued for defamation by Daily Mail for publishing a first-person article narrative by a former employee of Daily Mail, and stated that the article contained was being intended to mock ‘The Mail’.

A former employee of Yahoo Teresa Thomas sued Gawker for alleging that she was dating her boss, and invading her privacy and defaming her.

And, the most important of all…

In 2012, Gawker had posted a short clip of Hulk Hogan having sex with Heather Clem (wife of radio personality Bubba). Hogan sent Gawker a cease-and-desist order to take the video down, but since the company blatantly refused, the case was moved to become a lawsuit for violation of privacy, with an asking of $100 million in damages.

Interestingly, the lawsuit was secretly being bankrolled by Peter Thiel.

Cut to 2016 – to continue fighting, Gawker Media had to sell a minority stake to Columbus Nova Technology Partners.

In March 2016, the case was ruled in favour of Hulk Hogan by the jury and was awarded $115 Mn in compensatory damages, along with an additional $25 Mn in punitive damages, and $10 Mn from Denton personally.

This led to the auctioning of the assets of Gawker Media, which included offers such as a “stalking horse” offer by Ziff Davis (owner of IGN and AskMen.com, tech and gaming publisher, whose digital properties include PC Magazine, ExtremeTech and IGN) of “$90 million”. A stalking horse bidder is someone who helps set the minimum base price for bidding, by throwing a number during the bid.

Why does Univision Want Gawker’s Network of critical Blogs?

To begin with – Univision is the biggest Hispanic media company serving Latin Americans in the US. They have evolved into a multimedia company with 16 broadcast, cable and digital networks, 61 television stations, and online and mobile apps, products and content creation facilities in New York City, Los Angeles, and Miami.

So, why in the world would a company so diversified and sorted, want Gawker Media, an aggressively disrespectful digital publisher that sold itself in a bankruptcy auction?

Well, that’s because there’s more to what meets the eye!

First, UCI is not looking to turn all these brands into Univision brands, and all they are looking for is to be able to sell ads against all of these, and want to expand their reach with different brands.

Their core business of television is suffering from a steep downfall of viewership, and to help itself from the fall, the company has seen to be been investing heavily in the digital arena and going after these multicultural and millennial properties. This is also being done to improve their financial profile ahead of their IPO (initial public offering) that is expected later in 2016.

Univision’s online-growth strategy outlined that they were expanding their role as a go-to source for digitally connected, diverse audience, and if you take a look at their digital assets under FMG [The Root, Flama, Univision Digital, Univision Music, FUSION, El Rey Network, The Onion, The A.V. Club, ClickHole, and Story House], it is very clear that their plan is aimed at diversifying their aggregate in the middle of an aging and largely Spanish-speaking audience that it has been serving for decades.

The trick here for them would be to maintain its connection to Latino consumers while building out media properties keeping in mind that they don’t fall into that bracket.

And Gawker Media fits just perfectly, in this strategy! Even though, their sites does not focus on Hispanics per se, but the millions of eyeballs it delivers that majorly fall under the age of 35, could fit nicely into their overall pitch to advertisers.

To add to that, is their well-developed eCommerce business that Univision could leverage across its portfolio as well.

Although, we can’t really say as to how Univision’s digital businesses will gel with Gawker from an operational standpoint, and they can’t even give an assurance that they will successfully replace the reduced television advertising revenue, with revenue from their digital platforms, as well. All Univision is now focusing on is justifying its find for new avenues of growth, to once again become the dominant broadcaster.

And even if Univision does end up getting wounded by owning Gawker’s media operations — but Gawker will still remain valuable (given that, it has revenues worth $18 Mn for the year to date as compared with $49 Mn in 2015 during the same time) — and can be used as a vehicle to expand their online advertising reach to millennial audiences.